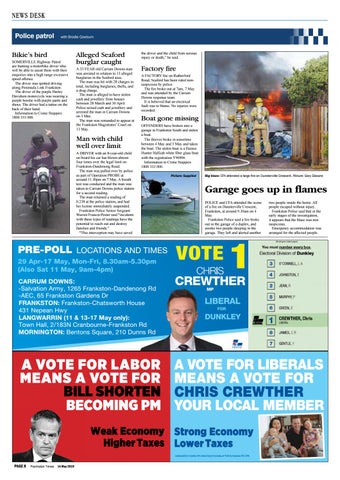 Bikie’s bird SOMERVILLE Highway Patrol are hunting a motorbike driver who will be able to assist them with their enquiries into a high range excessive speed offence. The driver was spotted driving along Peninsula Link Frankston. The driver of the purple Harley Davidson motorcycle was wearing a purple hoodie with purple pants and shoes. The driver had a tattoo on the back of their hand. Information to Crime Stoppers 1800 333 000.

Alleged Seaford burglar caught A 33 YEAR old Carrum Downs man was arrested in relation to 13 alleged burglaries in the Seaford area. The man was hit with 28 charges in total, including burglaries, thefts, and a drug charge. The man is alleged to have stolen cash and jewellery from houses between 28 March and 30 April. Police seized cash and jewellery and arrested the man in Carrum Downs on 3 May. The man was remanded to appear at the Frankston Magistrates’ Court on 13 May.

Man with child well over limit A DRIVER with an 8-year-old child on board his car has blown almost four times over the legal limit on Frankston-Dandenong Road. The man was pulled over by police as part of Operation PROBE at around 11.30pm on 7 May. A breath test was conducted and the man was taken to Carrum Downs police station for a second reading. The man returned a reading of 0.238 at the police station, and had his license immediately suspended. Frankston Police Senior Sergeant Warren Francis-Pester said “incidents with these types of readings have the potential to reach out and destroy families and friends.” “This interception may have saved

the driver and the child from serious injury or death,” he said.

Factory fire A FACTORY fire on Rutherford Road, Seaford has been ruled nonsuspicious by police. The fire broke out at 7am, 7 May and was attended by the Carrum Downs response team. It is believed that an electrical fault was to blame. No injuries were recorded.

Boat gone missing OFFENDERS have broken into a garage in Frankston South and stolen a boat. The thieves broke in sometime between 4 May and 5 May and taken the boat. The stolen boat is a Haines Hunter Halfcab white fiber glass boat with the registration Y96906. Information to Crime Stoppers 1800 333 000. Picture: Supplied

Garage goes up in flames POLICE and CFA attended the scene of a fire on Dunsterville Crescent, Frankston, at around 9.30am on 4 May. Frankston Police said a fire broke out in the garage of a duplex, and awoke two people sleeping in the garage. They left and alerted another

two people inside the home. All people escaped without injury. Frankston Police said that in the early stages of the investigation, it appears that the blaze was non suspicious. Emergency accommodation was arranged for the affected people. (Small green ballot paper)

You must number every box.