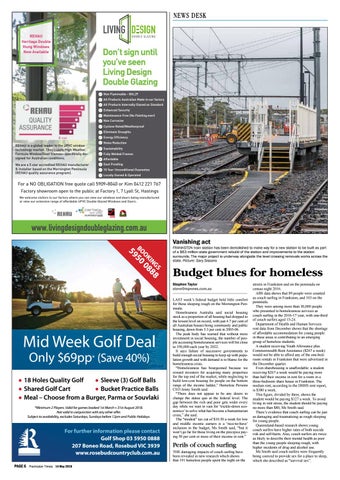 Non Flammable - BAL29 All Products Australian Made in our factory white

For a NO OBLIGATION free quote call 5909-8040 or Kim 0412 221 767 Factory showroom open to the public at Factory 1, 7 Lyall St, Hastings We welcome visitors to our factory where you can view our windows and doors being manufactured or view our extensive range of affordable UPVC Double Glazed Windows and Doors.

FRANKSTON train station has been demolished to make way for a new station to be built as part of a $63 million state government rebuild of the station and improvements to the station surrounds. The major project is underway alongside the level crossing removals works across the state. Picture: Gary Sissons

LAST week’s federal budget held little comfort for those sleeping rough on the Mornington Peninsula. Homelessness Australia said social housing stock as a proportion of all housing had dropped to the lowest level on record, with just 4.7 per cent of all Australian houses being community and public housing, down from 5.3 per cent in 2005-06. The peak body has warned that without more investment in social housing, the number of people accessing homelessness services will hit close to 350,000 each year by 2022. It says failure of successive governments to build enough social housing to keep up with population growth and with demand is to blame for the homelessness crisis. “Homelessness has bourgeoned because we reward investors for acquiring many properties for the top end of the market, while neglecting to build low-cost housing for people on the bottom rungs of the income ladder,” Homeless Persons CEO Jenny Smith said. “There does not appear to be any desire to change the status quo at the federal level. The gap between the rich and poor gets wider every day while we wait in vain for ‘trickle-down economics’ to solve what has become a humanitarian crisis,” she said. The “modest” tax cut of $10.50 a week for low and middle income earners is a ‘nice-to-have’ inclusion in the budget, Ms Smith said, “but it won’t go far for those living on the precipice paying 50 per cent or more of their income in rent.”

streets in Frankston and on the peninsula on census night 2016. ABS data shows that 89 people were counted as couch surfing in Frankston, and 103 on the peninsula. They were among more than 30,000 people who presented to homelessness services as couch surfing in the 2016-17 year, with one-third of couch surfers aged 15-24. Department of Health and Human Services rent data from December shows that the shortage of affordable accommodation for young people in these areas is contributing to an emerging group of homeless students. A student receiving Youth Allowance plus Commonwealth Rent Assistance ($267 a week) would not be able to afford any of the one-bedroom rentals in Frankston that were advertised in the December quarter. Even sharehousing is unaffordable: a student receiving $267 a week would be paying more than half their income in rent for a room in a three-bedroom share house in Frankston. The median rent, according to the DHHS rent report, is $380 a week. This figure, divided by three, shows the student would be paying $127 a week. To avoid living in rent stress, the student should be paying no more than $80, Ms Smith said. There’s evidence that couch surfing can be just as damaging and traumatising as rough sleeping for young people. Queensland-based research shows young couch surfers have higher rates of both suicide risk and self-harm. Also, couch surfers are twice as likely to describe their mental health as poor than the young people sleeping rough, with higher incidents of drug and alcohol use. Ms Smith said couch surfers were frequently being coerced to provide sex for a place to sleep, which she described as “survival sex”.