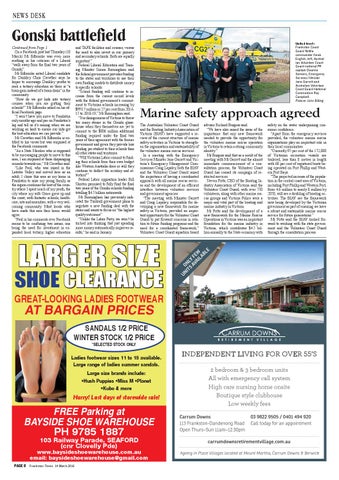 Marine safety approach agreed The Australian Volunteer Coast Guard and the Boating Industry Association of Victoria (BIAV) have supported a review of the current structure of marine safety activities in Victoria to strengthen the organisation and sustainability of the volunteer marine rescue services. In a meeting with the Emergency Services Minister Jane Garrett and Victoria’s Emergency Management Commissioner Craig Lapsley, both the BIAV and the Volunteer Coast Guard raised the importance of having a coordinated approach with all marine rescue services and the development of an efficient interface between volunteer services and government agencies. “The meeting with Minister Garrett and Craig Lapsley, responsible for developing a new framework for marine safety in Victoria, provided an important opportunity for the Volunteer Coast Guard to put forward concerns in relation to future funding programs and the need for a coordinated framework,” Volunteer Coast Guard squadron board

advisor Richard Burgess said. “We have also raised the issue of the importance that any new framework needed to provide the opportunity for the volunteer marine rescue operation in Victoria to retain a strong community identity.” Mr Burgess said that as a result of the meeting with Mr Garrett and the almost immediate commencement of a consultation process, the Volunteer Coast Guard has ceased its campaign of restricted services. Steven Potts, CEO of the Boating Industry Association of Victoria said the Volunteer Coast Guard, with over 750 volunteers, along with other marine rescue groups and Victoria Police were a major and vital part of the boating and marine industry in Victoria. Mr Potts said the development of a new framework for the Marine Rescue Operations in Victoria was an important foundation for the marine industry in Victoria, which contributes $4.5 billion annually to the State economy with

safety on the water underpinning consumer confidence. “Apart from the emergency services provided, the volunteer marine rescue organisations play an important role in their local communities. “Currently 95 per cent of the 172,000 of Victorian recreation vessels are trailered, less than 8 metres in length with 68 per cent of registered boats being operated on Port Phillip and Western Port Bays. “The projected increase of the population in the central coast area of Victoria, including Port Phillip and Western Port, from 4.6 million to nearly 8 million by 2050, will see a doubling of boating activities. The BIAV see the framework now being developed by the Victorian government as part of ensuring we have a robust and sustainable marine rescue service for future generations.” Mr Potts said the BIAV looked forward to working with the state government and the Volunteer Coast Guard through the consultation process.

and TAFE facilities and courses, versus the need to also invest in our primary and secondary schools. Both are equally important.” Federal Liberal Education and Training Minister Simon Birmingham said the federal government provides funding to the states and territories to use their own funding models to distribute money to specific schools. “School funding will continue to increase from the current record levels with the federal government’s commitment to Victorian schools increasing by $993.7 million or 27 per cent from 201415 to 2018-19,” Mr Birmingham said. “It is disingenuous of Victoria to throw too many stones in the Gonski glasshouse when they themselves are yet to commit to the $806 million additional funding required under the final two years of their agreement with the former government and given they provide less funding per student to their schools than all other states and territories. “Will Victorian Labor commit to funding their schools from their own budget like Western Australia does or will they continue to deflect the scrutiny and attention?” Federal Labor opposition leader Bill Shorten promised to fully fund the final two years of the Gonski schools funding totalling $4.5 billion nationwide. Mr Birmingham has previously indicated the Turnbull government plans to negotiate a new funding deal with the states and wants to focus on “the highest quality outcomes”. “Unlike the Labor Party, we won’t be tricked into thinking that just spending more money automatically improves results,” he said in January.

Continued from Page 1 On a Facebook post last Thursday (10 March) Mr Edbrooke was even more scathing in his criticism of a Liberal “walk away from the final two years of Gonski”. Mr Edbrooke noted Liberal candidate for Dunkley Chris Crewther says he hopes to encourage Dunkley youths to seek a tertiary education so there is “a brain gain instead of a brain drain” in the community. “How do we get kids into tertiary courses when you are gutting their schools?” Mr Edbrooke asked on his official Facebook page. “I won’t have you move to Frankston only months ago and pee on Frankston’s leg and tell us it’s raining when we are working so hard to ensure our kids get the best education we can provide.” Mr Crewther said Mr Edbrooke is entitled to his views but was surprised at the Facebook comments. “As a State Member who is supposed to be encouraging people to move to this area, I am surprised at these disparaging remarks towards me,” Mr Crewther said. “Like Paul, who was raised in the Latrobe Valley and moved here as an adult, I chose this area as my home in Frankston to raise my young family, as the region combines the best of the country where I spent much of my youth, the city where my wife Grace grew up and the coast, with fantastic schools, healthcare, arts and amenities, with a very welcoming community. Most locals who have made this area their home would agree. “Paul in his comments over Facebook seems to be confusing two issues, one being the need for investment in expanded local tertiary, higher education