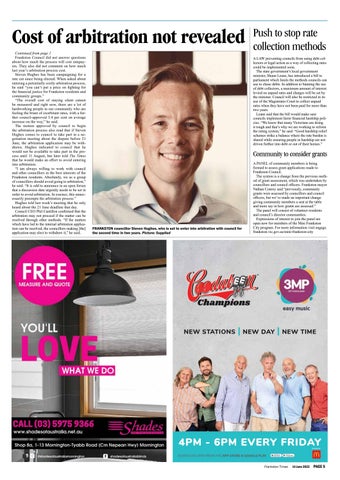 Cost of arbitration not revealed Continued from page 1 Frankston Council did not answer questions about how much the process will cost ratepayers. They also did not comment on how much last year’s arbitration process cost. Steven Hughes has been campaigning for a rate cut since being elected. When asked about entering a potentially costly arbitration process, he said “you can’t put a price on fighting for the financial justice for Frankston residents and community groups.” “The overall cost of staying silent cannot be measured and right now, there are a lot of hardworking people in our community who are feeling the brunt of exorbitant rates, with a further council-approved 3.4 per cent on average increase on the way,” he said. The motion approved by council to begin the arbitration process also read that if Steven Hughes comes to council to take part in a negotiation meeting about the dispute before 21 June, the arbitration application may be withdrawn. Hughes indicated to council that he would not be available to take part in the process until 11 August, but later told The Times that he would make an effort to avoid entering into arbitration. “I am always willing to work with council and other councillors in the best interests of the Frankston residents. Absolutely, we as a group of councillors should avoid going to arbitration,” he said. “It is odd to announce in an open forum that a discussion date urgently needs to be set in order to avoid arbitration. In essence, this unnecessarily preempts the arbitration process.” Hughes told last week’s meeting that he only heard about the 21 June deadline that day. Council CEO Phil Cantillon confirmed that the arbitration may not proceed if the matter can be resolved through other methods. “If the matters which have led to the internal arbitration application can be resolved, the councillors making [the] application may elect to withdraw it,” he said.

Push to stop rate collection methods A LAW preventing councils from using debt collectors or legal action as a way of collecting rates could be implemented soon. The state government’s local government minister, Shaun Leane, has introduced a bill to parliament which limits the methods councils can use to chase debts. In addition to banning the use of debt collectors, a maximum amount of interest levied on unpaid rates and charges will be set by the minister. Council will also be restricted in its use of the Magistrates Court to collect unpaid rates when they have not been paid for more than two years. Leane said that the bill would make sure councils implement fairer financial hardship policies. “We know that many Victorians are doing it tough and that’s why we are working to reform the rating system,” he said. “Good hardship relief schemes strike a balance where the rate burden is shared while ensuring people in hardship are not driven further into debt or out of their homes.”

FRANKSTON councillor Steven Hughes, who is set to enter into arbitration with council for the second time in two years. Picture: Supplied

A PANEL of community members is being formed to assess grant applications made to Frankston Council. The system is a change from the previous method of grant assessment, which was undertaken by councillors and council officers. Frankston mayor Nathan Conroy said “previously, community grants were assessed by councillors and council officers, but we’ve made an important change giving community members a seat at the table and more say in how grants are assessed.” The panel will consist of volunteer residents and council’s director communities. Expressions of interest to join the panel are open now for members of the Mini Frankston City program. For more information visit engage. frankston.vic.gov.au/mini-frankston-city