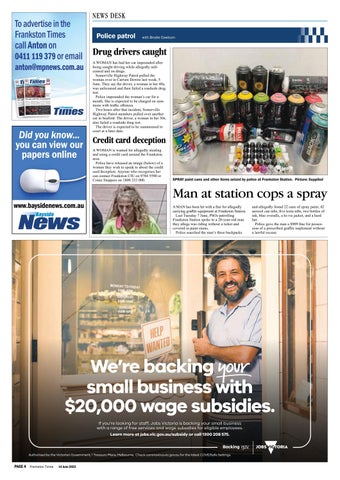 Wall to wall artworks A SERIES of new murals have been painted around Frankston. Artists came to town last month to take part in the Big Picture Fest. See story page 5. Picture: Supplied

bayside to inner Melbourne comparison means that for Frankston This amount City Counto raise a similarit to prosays “Frankstonthan average suburbs. City Council com- services are not higher councils (for bayside metropolitan in rates as other deliver key cil rates says “Frankston City Coun- comparison to inner Melbourne local government to other key comservices and “Council must re-focuscomparison services and deliver level ofservices provide on for Frankston dollar generally lower in its energies on provide infrastructure projects.” vide a similar are not higher than average suburbs. This means that rate in the Cowburn Brodieenergies of fi- services are in fact munity infrastructure rates to projects.”it must use acil rates amount the comto and is a lot superior providing re-focus its the com- munity to other metropolitan City Council to raise a similar services) comparing a councils comparison put said “there in valuations.” of fi- the is a lot how when said “there to brodie@baysidenews.com.au Cr Hughes “Council must services eastern on it to prolevel based about Cr Hughes affordable at an to be is appliedato councils and munity on are in fact generally lower in rates as other councils (for which mongering but particularly scheduled in Melbourne’s about howwas nancial fear mongering level based services providing superior That might government of our residents. nancial fear motion means theon other councils Theservices when comparing rates to vide a similar level of local 4 April meeting, an affordable but particularly That might rate cut would impacthaveforgoing impact on u Brodie Cowburn pool or rate cut would munity at per propat council’s deadline. in Melbourne’s eastern services) it must use a rate in the dollar a new swimming is pushing Imean ring-fenced collectedhullabaloo. forward denews.com.a of our residents. A FRANKSTON other councils pool orcouncillor and suburbs”. to I have ring-fenced the means average rate it’s allequivalent swimming brodie@baysi it will bring after publication it’s all hullabaloo.like community statues but The legitimacy fancy which is applied to the valuations.” a newfor by Cr Hughes a rate cut. roughlydepartments suburbs”. community and to prolike shortly put forward one departments ratepaymean forgoingbut it will bring legitimacy key is currentlyis key thatassessment to an organisation The motion was scheduled to be put back safety rates byrate forward erty A proposal Frankston propcollected per propHughes has put and cutaverage Steven Crthat is pushing The community to prosafety is currently last year to as buthealth, and ofcommunity councils, fancy statues councillor meeting, community, being in thenearby health, rates for from many in by impacta 7-2 vote as general to cut in February is roughly equivalent to forward at council’s 4 April organisation a percentage a proposal assessment erty with impactfunding viewed, A FRANKSTON rejected funding their is The becausefrom being reduction back to an said.as tect deadline. the community, tect their with their reality,” of touch out the cent was in ers payshemore cent in that per proposes says thisproposes perreduction many inFrankston residents councils, but Frankston ratepay- shortly after publication nearby not supported” he said. by five He for a rate cut. Hughes has put forward that the Counciled.” Hein Frankston viewed, by cuts totocounput togethcut promise the proposal their reality,” response A proposal put forward by Cr Hughes erty value. year. He told financialed.” rates for 2022/2023 be offsetAby Cr Steven to coun- ers pays more as a percentage of proptouch with the cuts 24/2/21). put togethoffset by(“Rate be these rate income andvaluation capital works average corporate rate income proposal director“the to cut general per cent in out of many of by council’s er and in February last year to cut rates by one spend iscosts to the The and council thanoperating that “total Times in andTimes lowercil’s capital works erty value. Council says this is because five a proposal costs corporate A response lower that the imwith a 7-2 vote cil’s operating director is generally residents by year. He told rates are commercial services read im-Frankston driver mainthat theread thewhy “the average valuation in Frankston per cent was rejected significantly council’s Frankston council’s by and program. er The would cut rate financial program. is of the five per cent councils pactmotion, simple, ifto the services than many of these (“Rate cut promise not supported” are. It’s quite as they as highrate cut would the 2022/2023 “total council spend In response to the motion, council’s is generally lower commercial In response cent significant and will imand commercial that in Times 24/2/21). will go be “extremely im-than rates rates are the five percouncil spends and commercial councils and significantly lower The Times and willless why Frankston director corporate if pact of pact on council’s future ability to both director corporate significant to both the main driver are. It’s quite simple, go be “extremely down.” future ability they will as high as pact on council’s less than rates council spends down.”

A WOMAN has had her car impounded after being caught driving while allegedly unlicensed and on drugs. Somerville Highway Patrol pulled the woman over in Carrum Downs last week, 5 June. They say the driver, a woman in her 40s, was unlicensed and then failed a roadside drug test. Police impounded the woman’s car for a month. She is expected to be charged on summons with traffic offences. Two hours after that incident, Somerville Highway Patrol members pulled over another car in Seaford. The driver, a woman in her 30s, also failed a roadside drug test. The driver is expected to be summonsed to court at a later date.

Did you know... Credit card deception you can view our papers online A WOMAN is wanted for allegedly stealing and using a credit card around the Frankston area. Police have released an image (below) of a women they wish to speak to about the credit card deception. Anyone who recognises her can contact Frankston CIU on 9784 5590 or Crime Stoppers on 1800 333 000.

Man at station cops a spray A MAN has been hit with a fine for allegedly carrying graffiti equipment at Frankston Station. Last Tuesday 7 June, PSOs patrolling Frankston Station spoke to a 20-year-old man they allege was riding without a ticket and covered in paint stains. Police searched the man’s three backpacks

and allegedly found 22 cans of spray paint, 42 aerosol can nibs, five texta nibs, two bottles of ink, blue overalls, a hi-vis jacket, and a hard hat. Police gave the man a $909 fine for possession of a prescribed graffiti implement without a lawful excuse.