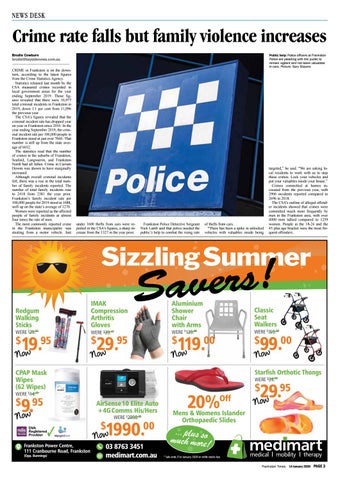 Crime rate falls but family violence increases Brodie Cowburn brodie@baysidenews.com.au CRIME in Frankston is on the downturn, according to the latest figures from the Crime Statistics Agency. Statistics released last month by the CSA measured crimes recorded in local government areas for the year ending September 2019. Those figures revealed that there were 10,977 total criminal incidents in Frankston in 2019, down 1.1 per cent from 11,096 the previous year. The CSA’s figures revealed that the criminal incident rate has dropped year on year in Frankston since 2016. In the year ending September 2019, the criminal incident rate per 100,000 people in Frankston stood at just over 7666. That number is still up from the state average of 6032. The statistics read that the number of crimes in the suburbs of Franskton, Seaford, Langwarrin, and Frankston North had all fallen. Crime in Carrum Downs was shown to have marginally increased. Although overall criminal incidents fell, there was a rise in the total number of family incidents reported. The number of total family incidents rose to 2418 from 2381 the year prior. Frankston’s family incident rate per 100,000 people for 2019 stood at 1688, well up on the state’s average of 1270. Women were reported as the affected people of family incidents at almost four times the rate of men. The most commonly reported crime in the Frankston municipality was stealing from a motor vehicle. Just

Public help: Police officers at Frankston Police are pleading with the public to remain vigilant and not leave valuables in cars. Picture: Gary Sissons

under 1600 thefts from cars were reported in the CSA’s figures, a sharp increase from the 1327 in the year prior.

of thefts from cars. “There has been a spike in unlocked vehicles with valuables inside being

targeted,” he said. “We are asking local residents to work with us to stop these crimes. Lock your vehicles and put your valuables inside your house.” Crimes committed at homes increased from the previous year, with 2906 incidents reported compared to 2696 in 2018. The CSA’s outline of alleged offender incidents showed that crimes were committed much more frequently by men in the Frankston area, with over 4000 men tallied compared to 1259 women. People in the 18-24 and the 45 plus age bracket were the most frequent offenders.