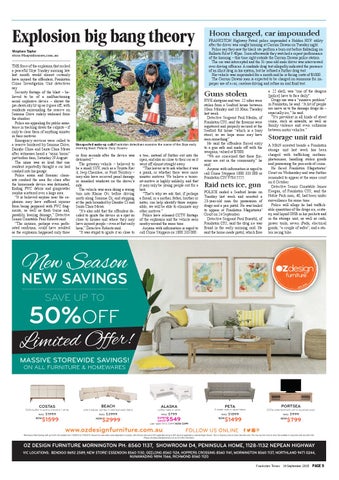 Explosion big bang theory Stephen Taylor steve@baysidenews.com.au THE force of the explosion that rocked a peaceful Skye Sunday morning late last month would almost certainly have injured the offenders, Frankston Crime Investigation Unit detectives say. Security footage of the blast â&amp;#x20AC;&amp;#x201C; believed to be of a malfunctioning aerial explosive device â&amp;#x20AC;&amp;#x201C; shows the pre-dawn sky lit up as it goes off, with residents surrounding the reserve on Sanoma Drive rudely wakened from the slumber. Police are appealing for public assistance in tracking down the culprits â&amp;#x20AC;&amp;#x201C; if only to clear them of anything sinister in their motives. Emergency services were called to a reserve bordered by Sanoma Drive, Danube Close and Santa Clara Mews after witnesses heard a â&amp;#x20AC;&amp;#x153;sonic boomâ&amp;#x20AC;? just before 6am, Saturday 29 August. The noise was so loud that one resident reportedly thought a car had crashed into his garage. Police arson and forensic chemists combed the area for clues after the homemade device was detonated, finding PVC debris and gunpowder residue scattered over a large area. â&amp;#x20AC;&amp;#x153;It is believed anyone near the explosion may have suffered injuries from being peppered with PVC fragments, as well as flash burns and, possibly, hearing damage,â&amp;#x20AC;? Detective Senior Constable Paul Roberts said. â&amp;#x20AC;&amp;#x153;The injuries, perhaps even perforated eardrums, could have resulted as the explosion happened only three

Hoon charged, car impounded FRANKSTON Highway Patrol police impounded a Holden HSV utility after the driver was caught hooning at Carrum Downs on Tuesday night. Police say they saw the black ute perform a burn out before fishtailing on Ballarto Rd at 9.40pm. Soon afterwards they watched a repeat performance of the hooning â&amp;#x20AC;&amp;#x201C; this time right outside the Carrum Downs police station. The car was intercepted and the 31-year-old male driver was interviewed over driving offences. A roadside drug test allegedly indicated the presence of an illicit drug in his system, but he refused a further drug test. His vehicle was impounded for a month and he is facing costs of $1000. The Carrum Downs man is expected to be charged on summons for improper use of a car, careless driving and refuse an oral fluid test.

a tree, instead of further out into the open, and also so close to their car as it went off almost straight away. â&amp;#x20AC;&amp;#x153;This leaves us to ask whether it was a prank, or whether there were more sinister motives. We believe a terrorist-motive is highly unlikely, and that it may only be young people out for a lark. â&amp;#x20AC;&amp;#x153;Thatâ&amp;#x20AC;&amp;#x2122;s why we ask that, if perhaps a friend, or a mother, father, brother or sister, can help identify those responsible, we will be able to eliminate any other motives.â&amp;#x20AC;? Police have released CCTV footage of the explosion and the vehicle seen nearby around the same time. Anyone with information is urged to call Crime Stoppers on 1800 333 000.

FIVE shotguns and two .22 rifles were stolen from a Seaford house between 10am Monday and 10.30am Tuesday last week. Detective Sergeant Paul Mealia, of Frankston CIU, said the firearms were registered and properly secured at the Seaford Rd house â&amp;#x20AC;&amp;#x153;which is a busy street, so we hope some may have seen somethingâ&amp;#x20AC;?. He said the offenders forced entry to a gun safe and made off with the weapons, valued at $7000. â&amp;#x20AC;&amp;#x153;We are concerned that these firearms are out in the community,â&amp;#x20AC;? he said. Anyone with information is urged to call Crime Stoppers 1800 333 000 or Frankston CIU 9784 5555.

Raid nets ice, gun POLICE raided a Seaford house on Tuesday last week and arrested a 23-year-old man for possession of drugs and a pen pistol. He was bailed to appear at Frankston Magistratesâ&amp;#x20AC;&amp;#x2122; Court on 24 September. Detective Sergeant Paul Busuttil, of Frankston CIU, said the drug ice was found in the early morning raid. He said the home-made pistol, which fires

Storage unit raid A MAN arrested beside a Frankston storage unit last week has been charged with trafficking methamphetamines, handling stolen goods and possessing the proceeds of crime. He faced Frankston Magistratesâ&amp;#x20AC;&amp;#x2122; Court on Wednesday and was further remanded to appear at the same court on 6 October. Detective Senior Constable James Keegan, of Frankston CIU, said the Noble Park man, 40, had been under surveillance for some time. Police will allege he had traffickable quantities of the drugs ice, ecstasy, and liquid GHB in his pockets and in the storage unit, as well as cash, power tools, seven iPads, electrical goods, â&amp;#x20AC;&amp;#x153;a couple of safesâ&amp;#x20AC;?, and a stolen racing bike.

NEW SAVINGS SAVE UP TO