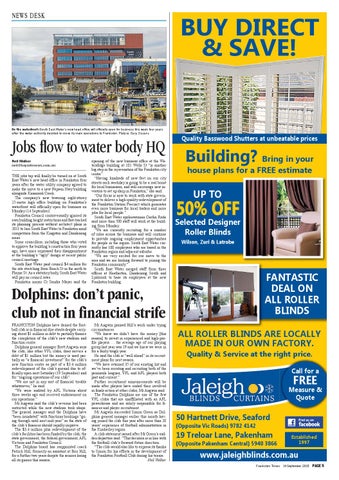 On the waterfront: South East Water’s new head office will officially open for business this week four years after the water authority decided to move its main operations to Frankston. Picture: Gary Sissons

Jobs flow to water body HQ Neil Walker neil@baysidenews.com.au THE jobs tap will finally be turned on at South East Water’s new head office in Frankston four years after the water utility company agreed to make the move to a new Nepean Hwy building alongside Kananook Creek. The company’s new towering eight-storey 25-metre high office building on Frankston’s waterfront will officially open for business on Monday (14 September). Frankston Council controversially ignored its own building height restrictions and fast-tracked its planning process without architect plans in 2011 to lure South East Water to Frankston amid competition from the Kingston and Dandenong areas. Some councillors, including those who voted to approve the building’s construction four years ago, have since expressed their disappointment at the building’s “ugly” design at recent public council meetings. South East Water paid council $4 million for the site stretching from Beach St in the north to Playne St. As a statutory body, South East Water will pay no council rates. Frankston mayor Cr Sandra Mayer said the

opening of the new business office at the WatersEdge building at 101 Wells St “is another big step in the rejuvenation of the Frankston city centre”. “Having hundreds of new feet on our city streets each weekday is going to be a real boost for local businesses, and will encourage new investors to set up shop in Frankston,” she said. “Our focus is now to work with state government to deliver a high-quality redevelopment of the Frankston Station Precinct which generates even more business for local traders and more jobs for local people.” South East Water spokeswoman Caitlin Rode said more than 500 staff will work at the building from Monday. “We are currently recruiting for a number of roles across the business and will continue to provide ongoing employment opportunities for people in the region. South East Water currently has 100 employees who are based in the Frankston region and adjacent suburbs. “We are very excited for our move to the area and we are looking forward to joining the Frankston community.” South East Water merged staff from three offices at Heatherton, Dandenong South and Lynbrook to base its employees at the new Frankston building.

Dolphins: don’t panic, club not in financial strife FRANKSTON Dolphins have denied the football club is in financial dire straits despite carrying about $1 million in debt to partially finance the completion of the club’s new stadium and function centre. Dolphins general manager Brett Angwin says the club, like other VFL clubs, does service a debt of $1 million but the money is used partially as “a financial investment” for the club’s new function centre as part of a $3.4 million redevelopment of the club’s ground due to officially open next Saturday (19 September) and for “ongoing operations of our club”. “We are not in any sort of financial trouble whatsoever,” he said. “We were audited by AFL Victoria about three weeks ago and received endorsement on our operations.” Mr Angwin said the club’s revenue had been restricted while the new stadium took shape. The general manager said the Dolphins have “been inundated” with functions bookings “going through until next mid-year” so the state of the club’s finances should rapidly improve. The $3.4 million plus redevelopment of the club’s facilities has been funded by the club, the state government, the federal government, AFL Victoria and Frankston Council. The Dolphins board has reappointed coach Patrick Hill, formerly an assistant at Box Hill, for a further two years despite the seniors losing all its games this season.

Mr Angwin praised Hill’s work under trying circumstances. “We knew we didn’t have the money [this season] to invest in experienced and high-profile players … the average age of our playing group last year was 19 and we knew we were in for a fairly tough year. He said the club is “well ahead” in its recruitment plans for next season. “We have retained 35 of our existing list and we’ve been scouting and recruiting both of the peninsula leagues, VFL and AFL players both past and current.” Further recruitment announcements will be made after players have ended their involved in finals action at other clubs, Mr Angwin said. The Frankston Dolphins are one of the few VFL clubs that are unaffiliated with an AFL powerhouse and are solely responsible for finances and player recruitment. Mr Angwin succeeded Simon Green as Dolphins general manager earlier this month having joined the club this year after more than 20 years’ experience of football administration in the Kimberley region. A club statement issued after Mr Green’s sudden departure said: “This decision is in line with the football club’s forward future direction. “The club would also like to express its thanks to Simon for his efforts in the development of the Frankston Football Club during his tenure. Neil Walker

ALL ROLLER BLINDS ARE LOCALLY MADE IN OUR OWN FACTORY. Quality &amp; Service at the right g p price. Call for a