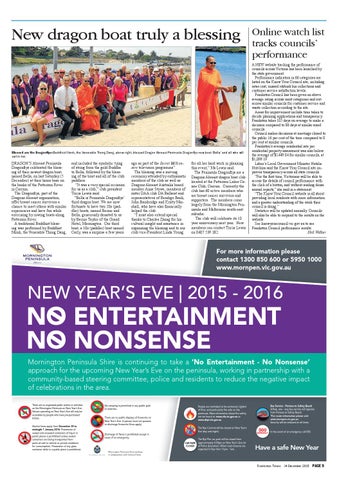 Blessed are the Dragonflys: Buddhist Monk, the Venerable Thong Dang, above right, blessed Dragon Abreast Peninsula Dragonflys new boat ‘Bella’ and all who will sail in her.

DRAGON’S Abreast Peninsula Dragonflys celebrated the blessing of their newest dragon boat, named Bella, on last Saturday (5 December) at their home base on the banks of the Patterson River in Carrum. The Dragonflys, part of the Dragons Abreast organisation, offer breast cancer survivors a chance to meet others with similar experiences and have fun while exercising by rowing boats along Patterson River. A traditional Buddhist blessing was performed by Buddhist Monk, the Venerable Thong Dang,

and included the symbolic tying of string from the gold Buddha to Bella, followed by the blessing of the boat and all of the club paddlers. “It was a very special occasion for us as a club,” club president Tricia Lewis said. “Bella is Peninsula Dragonflys’ third dragon boat. We are now fortunate to have two 20s (paddler) boats, named Bernie and Bella, generously donated to us by Bernie Taylor of the Grand Hotel, Mornington. Our third boat, a 10s (paddler) boat named Carly, was a surprise a few years

ago as part of the Secret Millionaire television programme”. The blessing was a moving ceremony attended by enthusiastic members of the club as well as Dragons Abreast Australia board member Anne Stowe, members of sister DAA club DA Ballarat and representatives of Bendigo Bank, John Bainbridge and Kristy Marshall, who have also financially helped the club. “I must also extend special thanks to Charles Zhang for his cultural insight and assistance in organising the blessing and to our club vice-President Linda Young

for all her hard work in planning this event,” Ms Lewis said. The Peninsula Dragonflys are a Dragons Abreast dragon boat club located at the Patterson Lakes Canoe Club, Carrum. Currently the club has 60 active members who are breast cancer survivors and supporters. The members come largely from the Mornington Peninsula and Melbourne south-east suburbs. The club will celebrate its 10 year anniversary next year. New members can contact Tricia Lewis on 0407 539 382.

Online watch list tracks councils’ performance A NEW website tracking the performance of councils across Victoria has been launched by the state government. Performance indicators in 66 categories are listed on the Know Your Council site, including rates cost, missed rubbish bin collections and customer service satisfaction levels. Frankston Council has been given an above average rating across most categories and outscores similar councils for customer service and waste collection according to the site. Areas for improvement include time taken to decide planning applications and transparency. Frankston takes 105 days on average to make a decision compared to 86 days at similar sized councils. Council makes decisions at meetings closed to the public 16 per cent of the time compared to 8 per cent at similar councils. Frankston’s average residential rate per residential property assessment was also below the average of $1449.04 for similar councils, at $1,099.19. Labor’s Local Government Minister Natalie Hutchins said the Know Your Council site improves transparency across all state councils. “For the first time, Victorians will be able to access the details of council performance with the click of a button, and without reading dense annual reports,” she said in a statement. “The Know Your Council website is all about providing local residents with more information and a greater understanding of the work their council is doing.” Statistics will be updated annually. Councils will also be able to respond to the results on the website. See knowyourcouncil.vic.gov.au to see Frankston Council performance results. Neil Walker

NO ENTERTAINMENT NO NONSENSE Mornington Peninsula Shire is continuing to take a ‘No Entertainment - No Nonsense’ approach for the upcoming New Year’s Eve on the peninsula, working in partnership with a community-based steering committee, police and residents to reduce the negative impact of celebrations in the area. There are no organised public events or activities on the Mornington Peninsula on New Year’s Eve. Venues operating on New Year’s Eve will only be accessible by people who have pre-purchased tickets. Alcohol bans apply from December 30 to midnight 1 January 2016. Possession of sealed and unsealed containers of liquor in public places is prohibited (unless sealed containers are being transported from point-of-sale to vehicle or private residence for consumption). Possession of any glass container while in a public place is prohibited.

No camping is permitted in any public park or reserves.

There are no public displays of ﬁreworks on New Year’s Eve. A person must not possess or discharge ﬁreworks (ﬁnes apply).

The Rye Carnival will be closed on New Year’s Eve (day and night). Discharge of ﬂares is prohibited except in cases of an emergency. CAR PARK CLOSED

People are reminded to be extremely vigilant of ﬁres: and particularly ﬁre-safe on the peninsula. More information about ﬁre safety can be found at: www.cfa.vic.gov.au or www.depi.vic.gov.au

The Rye Pier car park will be closed from approximately 4.00pm on New Year’s Eve (or at Police discretion). Minor road closures are expected in Rye from 11pm - 1am.

In the event of an emergency call 000.