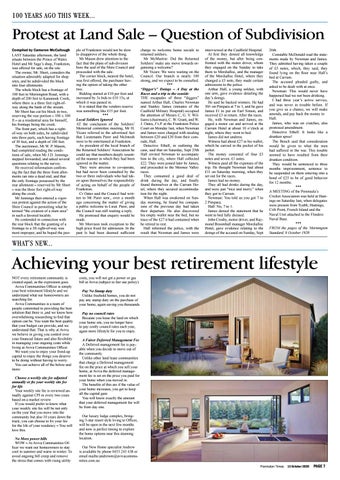 Protest at Land Sale – Question of Subdivision Compiled by Cameron McCullough LAST Saturday afternoon, the land situate between the Prince of Wales Hotel and Mr Sage’s shop, Frankston, was offered for sale, on the site. The owner, Mr. Short, considers the situation admirably adapted for shop sites, and he subdivided the block into four allotments. The whole block has a frontage of 100 feet to Mornington Road, with a depth of 200 feet to Kananook Creek, where there is a three feet right-ofway along the bank of the stream. Mr Short has cut his block in two, reserving the rear portion – 100 x 100 ft – as a residential area for himself, his frontage being the creek. The front part, which has a rightof-way on both sides, be subdivided into three parts, each having frontage of 30 feet, and a depth of 100 feet. The auctioneer, Mr W. P. Mason, had completed reading the conditions of sale, when Mr J.D. Jennings stepped forwarded, and asked several questions relating to the survey. He received information confirming the fact that the three front allotments ran into a dead end, and that the only frontage possessed by the rear allotment – reserved by Mr Short – was the three feet right-of-way along the creek. Mr Jennings then entered a vigorous protest against the action of the Shire Council in permitting what he termed “the creation of a slum area” in such a favored locality. He contended in connection with the rear block that the granting of a frontage to a 3ft right-of-way was most improper, and he hoped the peo-

ple of Frankston would not be slow to disapprove of the whole thing. Mr Mason drew attention to the fact that the plans of sub-division bore the seal of the Shire Council and proceeded with the sale. The corner block, nearest the hotel, was first offered, the purchaser having the option of taking the other two. Bidding started at £10 per foot and increased by 5s bids to £10 15s, at which it was passed in. It is stated that the vendors reserve was something like £15 per foot. *** Local Soldiers Ignored AT the conclusion of the Soldiers’ Memorial committee meeting, Mr H. Vicars referred to the advertised fact that Lieutenants Parer and McIntosh were to be entertained at Frankston. As president of the local branch of the Returned Soldiers’ Association he could say that members deeply resented the manner in which they had been ignored in the matter. They were anxious to co-operate, but had never been consulted by the two or three individuals who had taken upon themselves the responsibility of acting on behalf of the people of Frankston. Cr Oates said the Council had written to Mr Parer senr., over a month ago concerning the matter of giving a public welcome to Lieut. Parer, and the Council was still waiting a reply. He promised that enquiry would be made. Mr Morrison took exception to the high price fixed for admission. In the past ls had been deemed sufficient

charge to welcome home socials to returned soldiers. Mr McMurtrie: Did the Returned Soldiers’ make any move towards organising a welcome? Mr Vicars: We were waiting on the Council. Our branch is nearly 100 strong, and we expect to be consulted. *** “Digger’s” Doings – A Day at the Races and a trip to the seaside THE escapades of three “diggers” named Arthur Hall, Charles Newman and Stanley James (inmates of the Caulfield Military Hospital) occupied the attention of Messrs C, G. V. Williams (chairman), C. W. Grant, and W. J. Oates, J’s.P. at the Frankston Police Court on Monday last, when Newman and James were charged with stealing between £20 and £30 from their comrade, Hall. Detective Ethell, in outlining the case, said that on Saturday, Sept 25th Hall invited Newman to accompany him to the city, where Hall collected £22. They were joined later by James, and proceeded to the Moonee Valley races. They consumed a good deal of drink during the day, and finally found themselves at the Carrum Hotel, where they secured accommodation for the night. When Hall was awakened on Sunday morning, he found his companions of the previous day had taken their departure. He also discovered his empty wallet near the bed, but no trace of the £27 it had contained when he retired to rest. Hall informed the police, with the result that Newman and James were

interviewed at the Caulfield Hospital. At first they denied all knowledge of the money, but after being confronted with the motor driver, whom they engaged on the Sunday to take them to Mordialloc, and the manager of the Mordialloc Hotel, where they changed a £5 note, they made certain admissions to the police. Arthur Hall, a young soldier, with one arm, gave evidence detailing the day’s doings. He said he backed winners. He had 30/- on Pimpara at 7 to 1, and he gave James £1 to put on Earl Simon, and received £3 in return. After the races. He, with Newman and James, engaged a motor car and arrived at the Carrum Hotel at about 10 o’clock at night, where they went to bed. James did not undress. Witness had about £27 in his wallet, which he carried in the pocket of his jacket. The money consisted of four £5 notes and seven. £1 notes. Witness paid all the expenses of the trip. He thought Newman had about £11 on Saturday morning, when they set out for the races. James had no money. They all had drinks during the day, and were just “nice and merry” when they got to Carrum. Newman: You told us you got 7 to 2 Pimpara. Hall: No, 7 to 1. James denied the statement that he went to bed fully dressed. John Crosby, motor driver, and Raymond Broomhall manager Mordialloc Hotel, gave evidence relating to the doings of the accused on Sunday, Sept

26th. Constable McDonald read the statements made by Newman and James. They admitted having taken a couple of £5 notes, which, they said, they found lying on the floor near Hall’s bed at Carrum. The accused pleaded guilty, and asked to be dealt with at once. Newman: This would never have happened had we not been drinking. I had three year’s active service, and was never in trouble before. If you give us a chance, we will make amends, and pay back the money to Hall. James, who was on crutches, also promised amendment. Detective Ethell: It looks like a drunken spree! The Bench said that consideration would be given to what the men had suffered in the war. This trouble seemed to have resulted from their drunken condition. They would be sentenced to three months imprisonment, sentence to be suspended on them entering into a bond of £25 to be of good behavior for 12 months. *** A MEETING of the Peninsula’s Cricket Association was held at Hastings on Saturday last, when delegates were present from Tyabb, Hastings, Crib Point, French Island and the Naval Unit attached to the Flinders Naval Base. *** FROM the pages of the Mornington Standard, 8 October 1920

Achieving your best retirement lifestyle NOT every retirement community is created equal, as the expression goes. Aviva Communities Officer is simply your best retirement lifestyle and we understand what our homeowners are searching for. Aviva Communities is a team of people committed to providing the best solution that there is ,and we know how overwhelming researching to find that option can be. You want the best quality that your budget can provide, and we understand that. That is why at Aviva we believe in giving you control over your financial future and also flexibility in managing your ongoing costs while living at Aviva Communities Officer. We want you to enjoy your freed-up capital to enjoy the things you deserve to be doing without having to worry. You can achieve all of the below and more: Choose a weekly site fee adjusted annually or fix your weekly site fee for life Your weekly site fee is reviewed annually against CPI or every two years based on a market review If you would prefer to know what your weekly site fee will be not only on the year that you move into the community but also 10 years down the track, you can choose to fix your fee for the life of your residency – You will love this. No More power bills WOW – At Aviva Communities Officer we want our homeowners to stay cool in summer and warm in winter. To avoid ongoing bill creep and remove the stress that comes with rising utility

costs, you will not get a power or gas bill at Aviva (subject to fair use policy) Pay No Stamp duty Unlike freehold homes, you do not pay any stamp duty on the purchase of your home, again saving you thousands. Pay no council rates Because you lease the land on which your home sits, you no longer have to pay costly council rates each year, again more lifestyle for you to enjoy. A Fairer Deferred Management Fee A Deferred management fee is payable when you decide to move out of the community. Unlike other land lease communities that charge a Deferred management fee on the price at which you sell your home, at Aviva the deferred management fee is set on the price you paid for your home when you moved in. The benefits of this are if the value of your home increases, you get to keep all the capital gain You will know exactly the amount that your deferred management fee will be from day one. Our luxury lodge complex, bringing 5-star resort style living to Officer, will be open in the next few months and now is perfect timing to explore the home options near this stunning location. Our New Home specialist Andrew is available by phone 0455 245 438 or email mailto:andrewm@avivacommunities.com.au Frankston Times