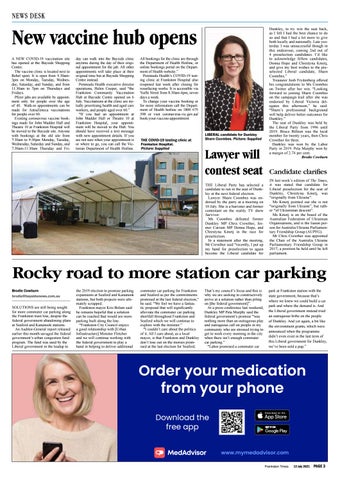 New vaccine hub opens A NEW COVID-19 vaccination site has opened at the Bayside Shopping Centre. The vaccine clinic is located next to Rebel sport. It is open from 9.30am5pm on Monday, Tuesday, Wednesday, Saturday, and Sunday, and from 11.30am to 7pm on Thursdays and Fridays. Pfizer jabs are available by appointment only for people over the age of 40. Walk-in appointments can be made for AstraZeneca vaccinations for people over 60. Existing coronavirus vaccine bookings made for John Madder Hall and Theatre 10 at Frankston Hospital will be moved to the Bayside site. Anyone with bookings at the old site from 7:30am to 9:30pm Monday, Tuesday, Wednesday, Saturday and Sunday, and 7:30am-11:30am Thursday and Fri-

day can walk into the Bayside clinic anytime during the day of their original appointment for the jab. All other appointments will take place at their original time but at Bayside Shopping Centre instead. Peninsula Health executive director operations, Helen Cooper, said “the Frankston Community Vaccination Hub at Bayside Centre opened on 6 July. Vaccinations at the clinic are initially prioritising health and aged care workers, and people aged over 60.” “If you had an appointment at John Madder Hall or Theatre 10 at Frankston Hospital, your appointment will be moved to the Hub. You should have received a text message with new appointment details. If you are not sure when your appointment is or where to go, you can call the Victorian Department of Health Hotline.

Lawyer will contest seat THE Liberal Party has selected a candidate to run in the seat of Dunkley at the next federal election. Lawyer Sharn Coombes was endorsed by the party at a meeting on 10 July. She is a barrister and former contestant on the reality TV show Survivor. Ms Coombes defeated former Dunkley MP Chris Crewther, former Carrum MP Donna Hope, and Chrestyna Kmetj in the race for preselection. In a statement after the meeting, Mr Crewther said “recently, I put up my hand for preselection to again become the Liberal candidate for

Dunkley, to try win the seat back, as I felt I had the best chance to do so and that I had a lot more to give both locally and nationally. Late yesterday I was unsuccessful though in this endeavour, coming 2nd out of 4 preselection candidates. I’d like to acknowledge fellow candidates, Donna Hope and Chrestyna Kmetj, and give my best wishes to the preselected Liberal candidate, Sharn Coombes.” Treasurer Josh Frydenberg offered his congratulations to Ms Coombes on Twitter after her win. “Looking forward to joining Sharn Coombes on the campaign trail after she was endorsed by Liberal Victoria delegates this afternoon,” he said. “Sharn’s professional background will help deliver better outcomes for Dunkley.” The seat of Dunkley was held by the Liberal Party from 1996 until 2019. Bruce Billson was the local member for twenty years, then Chris Crewther for three. Dunkley was won by the Labor Party in 2019. Peta Murphy won by a margin of 2.74 per cent. Brodie Cowburn

Candidate clarifies IN last week’s edition of The Times, it was stated that candidate for Liberal preselection for the seat of Dunkley, Chrestyna Kmetj, was “originally from Ukraine”. Ms Kmetj pointed out she is not “originally from Ukraine”, but rather “of Ukraininan descent”. Ms Kmetj is on the board of the Australian Federation of Ukrainian Organisations, and is the liason person for Australia Ukraine Parliamentary Friendship Group (AUPFG). Mr Chris Crewther was appointed the Chair of the Australia Ukraine Parliamentary Friendship Group in 2017, a position he held until he left parliament.

the 2019 election to promise parking expansions at Seaford and Kananook stations, but both projects were ultimately scrapped. Frankston mayor Kris Bolam said he remains hopeful that a solution can be reached that would see more parking built along the line. “Frankston City Council enjoys a good relationship with [Urban Infrastructure] Minister Fletcher and we will continue working with the federal government to play a hand in helping to deliver additional

commuter car parking for Frankston and Seaford as per the commitments promised at the last federal election,” he said. “We feel we have a fantastic proposal that will significantly alleviate the commuter car parking shortfall throughout Frankston and Seaford which we will continue to explore with the minister.” “I couldn’t care about the politics of it. All I care about, as a local mayor, is that Frankston and Dunkley don’t lose out on the monies promised at the last election for Seaford.

That’s my council’s focus and this is why we are seeking to constructively arrive at a solution rather than piling on [the federal government]”. At a press conference last weekend, Dunkley MP Peta Murphy said the federal government’s promise “was nothing more than an outrageous play and outrageous call on people in my community who are stressed trying to get to work every morning in the city when there isn’t enough commuter car parking.” “Labor promised a commuter car

park at Frankston station with the state government, because that’s where we knew we could build a car park and where the demand is. And the Liberal government instead tried an outrageous bribe on the people of Dunkley. And yet again, a bit like the environment grants, which were announced when the programme didn’t even exist in the last term of this Liberal government for Dunkley, we’ve been sold a pup.”

Order your medication from your phone Download the free app www.mymedadvisor.com Frankston Times