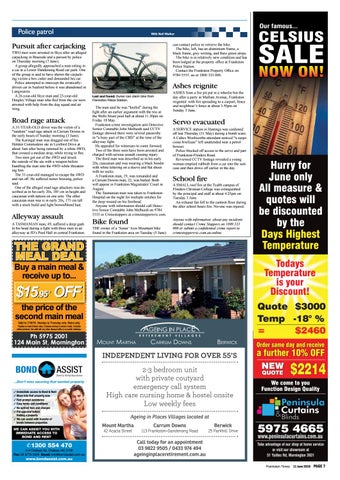 TWO men were arrested in Skye after an alleged carjacking in Braeside and a pursuit by police on Thursday morning (7 June). A group allegedly approached a man sitting in a car at a Lower Dandenong Road car park. One of the group is said to have shown the carjacking victim a box cutter and demanded his car. Police attempted to intercept the erraticallydriven car in Seaford before it was abandoned in Langwarrin. A 26-year-old Skye man and 25-year-old Dingley Village man who fled from the car were arrested with help from the dog squad and air wing.

A 31-YEAR-OLD driver was the victim of a “random” road rage attack in Carrum Downs in the early hours of Sunday morning (3 June). The Karingal man was dragged out of his Holden Commodore ute in Lyrebird Drive at about 3am after being rammed by a white 4WD, that crossed a median strip, while trying to flee. Two men got out of the 4WD and struck the outside of the ute with a weapon before bundling the man into the 4WD while threatening him The 31-year-old managed to escape the 4WD and ran off. He suffered minor bruising, police said. One of the alleged road rage attackers was described as in his early 20s, 185 cm in height and caucasian with tattoos on one arm. The other caucasian man was is in early 20s, 175 cm tall with a stock build and light brown/blond hair.

Alleyway assault A TASMANIAN man, 49, suffered a deep gash to his head during a fight with three men in an alleyway at JD’s Pool Hall in central Frankston.

can contact police to retrieve the bike. The bike, left, has an aluminium frame, a black frame, grey writing, and fluro green strips. The bike is in relatively new condition and has been lodged at the property office at Frankston Police Station. Contact the Frankston Property Office on 9784 5555. au or 1800 333 000.

The man said he was “knifed” during the fight after an earlier argument with the trio at the Wells Street pool hall at about 11.30pm on Friday 18 May. Frankston crime investigation unit Detective Senior Constable John Melhuish said CCTV footage showed there were several passersby in “a busy part of the CBD” at the time of the alleyway fight. He appealed for witnesses to come forward. Two of the three men have been arrested and charged with serious assault causing injury. The third man was described as in his early 20s, caucasian and was wearing a black hoodie with white lettering on a sleeve and flat shoes with no socks. A Frankston man, 19, was remanded and a Carrum Downs man, 22, was bailed. Both will appear in Frankston Magistrates’ Court in August. The Tasmanian man was taken to Frankston Hospital on the night for multiple stitches for the deep wound on his forehead. Anyone with information should call Detective Senior Constable John Melhuish on 9784 5555 or Crimestoppers at crimestoppersvic.com.

ASHES from a fire pit put in a wheelie bin the day after a party in Mallum Avenue, Frankston reignited with fire spreading to a carport, fence and neighbour’s fence at about 3.50pm on Sunday 3 June.

Servo evacuated A SERVICE station in Hastings was cordoned off last Thursday (31 May) during a bomb scare. A Caltex Woolworths attendant noticed “a suspicious briefcase” left unattended near a petrol bowser. Police blocked off access to the servo and part of Frankston-Flinders Road. Reviewed CCTV footage revealed a young woman emptied rubbish from a car into the suitcase and then drove off earlier in the day.

A SMALL roof fire at the Tyabb campus of Flinders Christian College was extinguished by the principal and staff at about 4.25pm on Tuesday 5 June. An exhaust fan fell to the canteen floor during the after school hours fire. No-one was injured. Anyone with information about any incidents should contact Crime Stoppers on 1800 333 000 or submit a confidential crime report to crimestoppersvic.com.au online.

Hurry for June only All measure &amp; quotes will be discounted by the Days Highest Temperature

Todays Temperature is your Discount!

the price of the second main meal

Ageing in Places Villages located at

Take advantage of our shop at home service or visit our showroom at 51 Yuilles Rd, Mornington 3931 Frankston Times