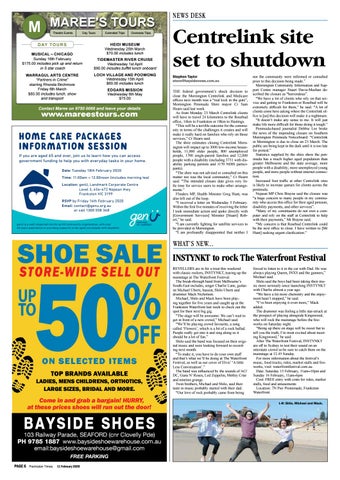 genU is a well respected not-for-profit community organisation, with over 65 years experience in providing supports to the aged and people with disability.

Come in and grab a bargain! HURRY, at these prices shoes will run out the door!

Centrelink site set to shutdown Stephen Taylor steve@baysidenews.com.au THE federal government’s shock decision to close the Mornington Centrelink and Medicare offices next month was a “real kick in the guts”, Mornington Peninsula Shire mayor Cr Sam Hearn said last week. As from Monday 23 March Centrelink clients will have to travel 24 kilometres to the Rosebud office, 14km to Frankston or 18km to Hastings. “This will be a terrible outcome for the community in terms of the challenges it creates and will make it really hard on families who rely on those services,” Cr Hearn said. The shire estimates closing Centrelink Mornington will impact up to 3000 low-income households, 11,000 older people, 800 unemployed people, 1700 single-parent families and 12,000 people with a disability (including 3731 with disability parking permits and 1170 NDIS participants). “The shire was not advised or consulted on this matter nor was the local community,” Cr Hearn said. “The intended closure date gives very little time for service users to make other arrangements.” Flinders MP, Health Minister Greg Hunt, was also left out of the loop. “I received a letter on Wednesday 5 February. Within the first five minutes of receiving the letter I took immediate action and spoke directly with [Government Services] Minister [Stuart] Robert,” he said. “I am currently fighting for satellite services to be provided in Mornington. “I am profoundly disappointed that neither I

nor the community were informed or consulted prior to this decision being made.” Mornington Community Information and Support Centre manager Stuart Davis-Meehan described the closure as “horrendous”. “We have a lot of clients who rely on that service and getting to Frankston or Rosebud will be extremely difficult for them,” he said. “A lot of clients come here asking where the Centrelink office is [so] this decision will make it a nightmare. “It doesn’t make any sense to me. It will just make life more difficult for those doing it tough.” Peninsula-based journalist Debbie Lee broke the news of the impending closure on Southern Mornington Peninsula Noticeboard: “Centrelink in Mornington is due to close on 23 March. The public are being kept in the dark until it is too late for protest.” Statistics supplied by the shire show the peninsula has a much higher aged population than greater Melbourne and the state average; more people with a disability; more unemployed young people, and more people without internet connection. Increased foot traffic at other Centrelink sites is likely to increase queues for clients across the peninsula. Nepean MP Chris Brayne said the closure was “a huge concern to many people in my community who access this office for their aged pension, disability payments, and other services”. “Many of my constituents do not own a computer and rely on the staff at Centrelink to help with their payments,” Mr Brayne said. “My concern is that Rosebud Centrelink could be the next office to close. I have written to [Mr Hunt] seeking urgent clarification.”

INSTYNKT to rock The Waterfront Festival REVELLERS are in for a treat this weekend with classic rockers, INSTYNKT, tearing up the mainstage at The Waterfront Festival. The break-through band from Melbourne’s South-East includes, singer Charlie Lane, guitarist Michael Uberti, bassist, Shilo Uberti and drummer Mack Nicholson. Michael, Shilo and Mack have been playing together for five years and caught up at the Frankston Waterfront last week to check out the spot for their next big gig. “The stage will be awesome. We can’t wait to get in front of a new crowd,” Michael said. “We’ll be playing crowd favourite, a song called ‘Flowers’, which is a bit of a rock ballad. People really get into it and sing along so it should be a lot of fun.” Shilo said the band was focused on their original music and were looking forward to recording next month. “To make it, you have to do your own stuff and that’s what we’ll be doing at The Waterfront Festival, as well as our cover of Elvis’ ‘A little Less Conversation’.” The band was influenced by the sounds of AC/ DC, Guns N’ Roses, Led Zeppelin, Mötley Crüe and nineties grunge. Twin brothers, Michael and Shilo, said their taste in music probably started with their dad. “Our love of rock probably came from being

forced to listen to it in the car with Dad. He was always playing Queen, INXS and the gunners,” Michael said. Shilo said the boys had been taking their music more seriously since launching INSTYNKT with Charlie almost a year ago. “We have a lot more chemistry and the enjoyment hasn’t stopped,” he said. “I’ve been enjoying it even more,” Mack added. The drummer was feeling a little star-struck at the prospect of playing alongside Kingswood, who will rock the mainstage before the fireworks on Saturday night. “Being up there on stage will be sweet but to tell you the truth, I’m most excited about meeting Kingswood,” he said. After The Waterfront Festival, INSTYNKT are off to Sydney to test their sound on an interstate crowd so be sure to catch them on the mainstage at 12.45 Sunday. For more information about the festival’s music, food trucks, rides, market stalls and fireworks, visit: waterfrontfestival.com.au Date: Saturday 15 February, 11am–10pm and Sunday 16 February, 11am–6pm Cost: FREE entry with costs for rides, market stalls, food and amusements Location: 7N Pier Promenade, Frankston Waterfront L-R: Shilo, Michael and Mack.