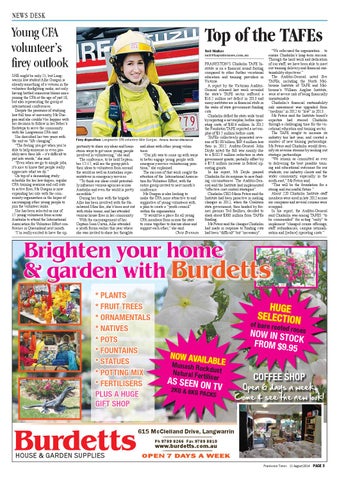 Top of the TAFEs

Young CFA volunteer’s firey outlook SHE might be only 21, but Langwarrin law student Allie Guegan is already something of a veteran in the volunteer firefighting ranks, not only having battled numerous blazes since joining the CFA at the age of just 18, but also representing the group at international conferences. Despite the pressures of studying law full time at university, Ms Guegan said she couldn’t be happier with her decision to follow in her father’s footsteps to serve the community with the Langwarrin CFA unit. She described her two years with the unit as “life changing”. “The feeling you get when you’re able to help someone or even possibly save their life – it’s difficult to put into words,” she said. “Even when we go to simple jobs, it’s nice to know that people really appreciate what we do.” On top of a demanding study schedule for her law degree, regular CFA training sessions and call outs to active fires, Ms Guegan is now expanding her role with the community organisation in the hopes of encouraging other young people to join the volunteer ranks. She has been selected as one of 15 young volunteers from across Australia to attend the International Association for Volunteer Effort conference in Queensland next month. “I’m really excited to have the op-

portunity to share my ideas and brainstorm ways to get more young people involved in volunteering,” she said. The conference, to be held September 15-17, will see the group pitch their ideas to volunteers from around the world as well as Australian representatives in emergency services. “To think our ideas could potentially influence various agencies across Australia and even the world is pretty incredible.” During her time with the brigade Allie has been involved with the Hazelwood Mine fire; she’s been sent out with strike teams; and has attended various house fires in her community. With the encouragement of her Captain Sean Curtin, Allie attended a youth forum earlier this year where she was invited to share her thoughts

and ideas with other young volunteers. “Our job was to come up with ways to better engage young people with emergency service volunteering positions,” she explained. The success of that work caught the attention of the International Association for Volunteer Effort, with the entire group invited to next month’s conference. Ms Guegan is also looking to make the CFA more attractive to and supportive of young volunteers with a plan to create a “youth council” within the organisation. “It would be a place for all young CFA members from across the state to come together to discuss ideas and support each other,” she said. Chris Brennan

FRANKSTON’S Chisholm TAFE Institute is on a financial sound footing compared to other further vocational education and training providers in Victoria. A report by the Victorian AuditorGeneral released last week revealed the state’s TAFE sector suffered a $16.2 million net deficit in 2013 and many institutes are in financial strife in the wake of state government funding cuts. Chisholm defied the state-wide trend by reporting a net surplus, before operating costs, of $30.6 million. In 2012 the Frankston TAFE reported a net surplus of $3.5 million before costs. TAFEs collectively generated revenue of $1.08 billion, $89.4 million less than in 2012. Auditor-General John Doyle noted the fall was mainly due to a $102.9 million reduction in state government grants, partially offset by a $7.8 million increase in federal operating grants. In his report, Mr Doyle praised Chisholm for its response to new funding circumstances. The Auditor-General said the Institute had implemented “effective cost control strategies”. Chisholm CEO Maria Peters said the Institute had been proactive in making changes in 2012, when the Coalition state government, then headed by former premier Ted Baillieu, decided to slash about $300 million from TAFEs funding. Ms Peters said the changes Chisholm had made in response to funding cuts had been “difficult” but “necessary”.

“We refocused the organisation… to ensure Chisholm’s long-term success. Through the hard work and dedication of our staff, we have been able to meet out training delivery and financial sustainability objectives.” The Auditor-General noted five TAFEs, including the North Melbourne Institute of TAFE and Melbourne’s William Angliss Institute, were at severe risk of being financially unsustainable. Chisholm’s financial sustainability risk assessment was upgraded from “medium” in 2012 to “low” in 2013. Ms Peters said the Institute board’s expertise had steered Chisholm through a challenging time for the vocational education and training sector. The TAFE sought to increase its industry ties last year, and created a number of new training partnerships. Ms Peters said Chisholm would diversify its revenue streams by seeking out strategic partnerships. “We remain as committed as ever to delivering the best possible training and educational outcomes for our students, our industry clients and the wider community, especially in the south-east,” Ms Peters said. “This will be the foundation for a strong and successful future.” About 220 Chisholm Institute staff members were axed in late 2012 across six campuses and several courses were scrapped. In his report, the Auditor-General said Chisholm was among TAFES “to be commended” for acting “early” to implement “changed course offerings, staff redundancies, campus rationalisation and [reduce] operating costs.”