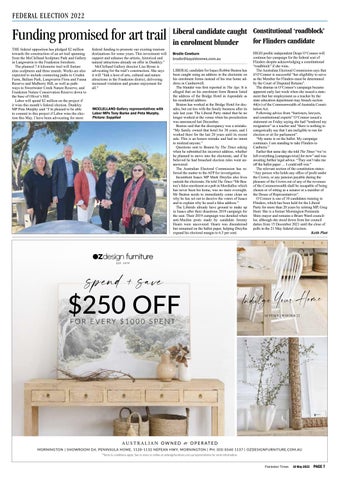 Funding promised for art trail THE federal opposition has pledged $2 million towards the construction of an art trail spanning from the McClelland Sculpture Park and Gallery in Langwarrin to the Frankston foreshore. The planned 7.4 kilometre trail will feature nine sculptures and three murals. Works are also expected to include connecting paths to Cruden Farm, Ballam Park, Langwarrin Flora and Fauna Reserve and Mulberry Hill, as well as pathways to Sweetwater Creek Nature Reserve, and Frankston Nature Conservation Reserve down to the base of Oliver’s Hill. Labor will spend $2 million on the project if it wins this month’s federal election. Dunkley MP Peta Murphy said “I’m pleased to be able to commit to this project if Labor wins the election this May. I have been advocating for more

federal funding to promote our existing tourism destinations for some years. This investment will support and enhance the artistic, historical and natural attractions already on offer in Dunkley.” McClelland Gallery director Lisa Byrne is advocating for the trail’s construction. She says it will “link a host of arts, cultural and nature attractions in the Frankston district, delivering increased visitation and greater enjoyment for all.”

Liberal candidate caught Constitutional ‘roadblock’ for Flinders candidate in enrolment blunder Brodie Cowburn brodie@baysidenews.com.au LIBERAL candidate for Isaacs Robbie Beaton has been caught using an address in the electorate on his enrolment forms instead of his true home address in Camberwell. The blunder was first reported in The Age. It is alleged that on his enrolment form Beaton listed the address of the Bridge Hotel in Aspendale as his residential address. Beaton has worked at the Bridge Hotel for decades, but cut ties with the family business after its sale last year. The Liberal Party stated that he no longer worked at the venue when his preselection was announced last December. Beaton said that the discrepancy was a mistake. “My family owned that hotel for 38 years, and I worked there for the last 20 years until its recent sale. This is an honest mistake and had no intent to mislead anyone.” Questions sent to Beaton by The Times asking when he submitted his incorrect address, whether he planned to move into the electorate, and if he believed he had breached election rules went unanswered. The Australian Electoral Commission has referred the matter to the AFP for investigation. Incumbent Isaacs MP Mark Dreyfus also lives outside the electorate. He told The Times “Mr Beaton’s false enrolment at a pub in Mordialloc which has never been his home, was no mere oversight. Mr Beaton needs to immediately come clean on why he has set out to deceive the voters of Isaacs and to explain why he used a false address.” The Liberals already have ground to make up in Isaacs after their disastrous 2019 campaign for the seat. Their 2019 campaign was derailed when anti-Muslim posts made by candidate Jeremy Hearn were uncovered. Hearn was disendorsed but remained on the ballot paper, helping Dreyfus expand his electoral margin to 6.5 per cent.

HIGH profile independent Despi O’Connor will continue her campaign for the federal seat of Flinders despite acknowledging a constitutional “roadblock” if she wins. The Australian Electoral Commission says that if O’Connor is successful “her eligibility to serve as the Member for Flinders must be determined by the Court of Disputed Returns”. The dramas in O’Connor’s campaign became apparent early last week when she issued a statement that her employment as a teacher by the state education department may breach section 44(iv) of the Commonwealth of Australia Constitution Act. Following advice from “barristers, lawyers, and constitutional experts” O’Connor issued a statement on Friday saying she had “tendered my resignation” as a teacher and ”there is nothing to categorically say that I am ineligible to run for election or sit for parliament”. “My name is on the ballot. My campaign continues. I am standing to take Flinders to Canberra.” Earlier that same day she told The Times “we’ve left everything [campaign-wise] for now” and was awaiting further legal advice. “They can’t take me off the ballot paper … I could still win.” The relevant section of the constitution states: “Any person who holds any office of profit under the Crown, or any pension payable during the pleasure of the Crown out of any of the revenues of the Commonwealth shall be incapable of being chosen or of sitting as a senator or a member of the House of Representatives”. O’Connor is one of 10 candidates running in Flinders, which has been held for the Liberal Party for more than 20 years by retiring MP, Greg Hunt. She is a former Mornington Peninsula Shire mayor and remains a Briars Ward councillor, although she stood down from her council duties from 15 December 2021 until the close of polls in the 21 May federal election. Keith Platt