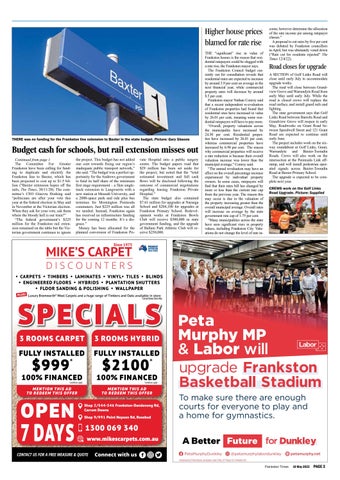 THERE was no funding for the Frankston line extension to Baxter in the state budget. Picture: Gary Sissons

Budget cash for schools, but rail extension misses out Continued from page 1 The Committee For Greater Frankston have been calling for funding to duplicate and electrify the Frankston line to Baxter, which has been projected to cost up to $1.5 billion (“Baxter extension hopes off the rails, The Times, 30/11/20). The committee’s CEO Ginevra Hosking said “politicians are after your vote this year at the federal election in May and in November at the Victorian election. When they ask for your vote, ask them where the bloody hell is our train?” “The federal government’s $225 million for the Frankston rail extension remained on the table but the Victorian government continues to ignore

the project. This budget has not added one cent towards fixing our region’s inadequate public transport network,” she said. “The budget was a perfect opportunity for the Andrews government to fund its half share of the minimum first stage requirement – a 5km singletrack extension to Langwarrin with a new station at Monash University, and a 2000-space park and ride plus bus terminus for Mornington Peninsula commuters. Just $225 million was all we needed. Instead, Frankston again has received no infrastructure funding for the coming 12 months. It’s a disgrace.” Money has been allocated for the planned conversion of Frankston Pri-

vate Hospital into a public surgery centre. The budget papers read that $29 million has been set aside for the project, but noted that the “total estimated investment and full cash flows will be disclosed following the outcome of commercial negotiations regarding leasing Frankston Private Hospital.” The state budget also contained $7.61 million for upgrades at Naranga School and $204,100 for upgrades at Frankston Primary School. Redevelopment works at Frankston Bowls Club will receive $500,000 in state government funding, and the upgrade of Ballam Park Athletic Club will receive $250,000.

THE “significant” rise in value of Frankston homes is the reason that residential ratepayers could be slugged with a rate rise, the Frankston mayor says. The Frankston Council budget currently out for consultation reveals that residential rates are expected to increase by around 3.9 per cent on average in the next financial year, while commercial property rates will decrease by around 8.5 per cent. Frankston mayor Nathan Conroy said that a recent independent re-evaluation of Frankston properties had found that residential sites have increased in value by 26.01 per cent, meaning some residential ratepayers will have to pay more. “Overall, property valuations across the municipality have increased by 24.30 per cent. Residential properties have increased by 26.01 per cent, whereas commercial properties have increased by 6.98 per cent. The reason why commercial properties will receive a rate reduction is because their overall valuation increase was lower than the municipal average,” Conroy said. “The annual revaluation may have an effect on the overall percentage increase experienced by individual property owners. In some cases, ratepayers will find that their rates bill has changed by more or less than the current rate cap from the previous year. The reason this may occur is due to the valuation of the property increasing greater than the overall municipal average. Overall rates will increase on average by the state government rate cap of 1.75 per cent. “Many municipalities across the state have seen significant rises in property values, including Frankston City. Valuations do not change the level of rate in-

come; however determine the allocation of the rate income pie among ratepayer classes.” A proposal to cut rates by five per cent was debated by Frankston councillors in April, but was ultimately voted down (“Rate cut for residents rejected” The Times 12/4/22).

Road closes for upgrade A SECTION of Golf Links Road will close until early July to accommodate upgrade works. The road will close between Grandview Grove and Warrandyte Road from early May until early July. While the road is closed crews will replace the road surface, and install guard rails and lighting. The state government says that Golf Links Road between Barretts Road and Grandview Grove will reopen in early May. Roadworks on Grant Road between Speedwell Street and 121 Grant Road are expected to continue until early June. The project includes work on the sixway roundabout at Golf Links, Grant, Warrandyte and Baxter-Tooradin Roads. Crews will also work on the intersection at the Peninsula Link offramp, and will install pedestrian operated signals across Baxter-Tooradin Road at Baxter Primary School. The upgrade is expected to be complete next year. CREWS work on the Golf Links Road Upgrade. Picture: Supplied

Peta Murphy MP &amp; Labor will upgrade Frankston Basketball Stadium To make sure there are enough courts for everyone to play and a home for gymnastics.