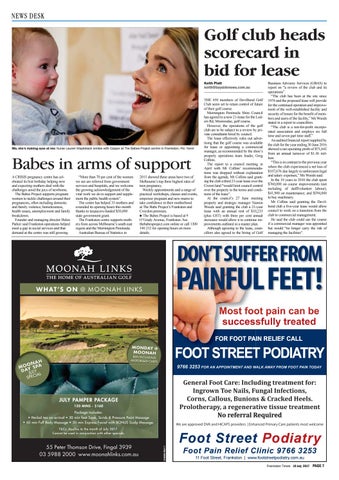 Babes in arms of support A CRISIS pregnancy centre has celebrated its first birthday helping new and expecting mothers deal with the challenges amid the joys of newborns. The Babes Project supports pregnant women to tackle challenges around their pregnancies, often including domestic and family violence, homelessness, health issues, unemployment and family breakdown. Founder and managing director Helen Parker said Frankston operations helped meet a gap in social services and that demand at the centre was still growing.

â&#x20AC;&#x153;More than 70 per cent of the women we see are referred from government services and hospitals, and we welcome the growing acknowledgement of the vital work we do to support and supplement the public health systemâ&#x20AC;?. The centre has helped 33 mothers and extended its opening hours this month thanks to taxpayers-funded $50,000 state government grant. The Frankston centre supports mothers from across Melbourneâ&#x20AC;&#x2122;s south east region and the Mornington Peninsula. Australian Bureau of Statistics in

2015 showed these areas have two of Melbourneâ&#x20AC;&#x2122;s top three highest rates of teen pregnancy. Weekly appointments and a range of practical workshops, classes and events, empower pregnant and new mums to take confidence in their motherhood at The Babe Projectâ&#x20AC;&#x2122;s Frankston and Croydon premises. ď Ž The Babes Project is based at 9 Oâ&#x20AC;&#x2122;Grady Avenue, Frankston. See thebabesproject.com online or call 1300 140 212 for opening hours on more details. ď&#x20AC;

THE 450 members of Devilbend Golf Club seem set to retain control of future of their golf course. Mornington Peninsula Shire Council has agreed to a new 21-lease for the Loders Rd, Moorooduc, golf course. However, the operations of the golf club are to be subject to a review by private consultants hired by council. The lease effectively rules out advertising that the golf course was available for lease or appointing a commercial manager, as recommended by the shireâ&#x20AC;&#x2122;s property operations team leader, Greg Collins. The report to a council meeting in April with Mr Collinsâ&#x20AC;&#x2122; recommendations was dropped without explanation from the agenda. Mr Collins said granting the club a third 21-year lease over the Crown land â&#x20AC;&#x153;would limit council control over the property to the terms and conditions of the leaseâ&#x20AC;?. At the councilâ&#x20AC;&#x2122;s 27 June meeting property and strategic manager Yasmin Woods said granting the club a 21-year lease with an annual rent of $10,233 (plus GST) with three per cent annual increases would allow it to continue improvements outlined in a master plan. Although agreeing to the lease, councillors also agreed to the hiring of Golf

Business Advisory Services (GBAS) to report on â&#x20AC;&#x153;a review of the club and its operationsâ&#x20AC;?. â&#x20AC;&#x153;The club has been at the site since 1974 and the proposed lease will provide for the continued operation and improvement of the well-established facility and security of tenure for the benefit of members and users of the facility,â&#x20AC;? Ms Woods stated in a report to councillors. â&#x20AC;&#x153;The club is a not-for-profit incorporated association and employs six full time and seven part time staff.â&#x20AC;? An audited financial report supplied by the club for the year ending 30 June 2016 showed a net operating profit of $71,642 from an annual turnover of $1.36 million. â&#x20AC;&#x153;This is in contrast to the previous year where the club experienced a net loss of $107,676 due largely to unforeseen legal and salary expenses,â&#x20AC;? Ms Woods said. In the 10 years to 2016 the club spent $760,000 on course improvements (not including of staff/volunteer labour); $41,900 on maintenance; and $594,000 to buy machinery. Mr Collins said granting the Devilbend club a five-year lease would allow council to work on a transition from the club to commercial management. He said the club could use the course if a commercial manager was appointed but would â&#x20AC;&#x153;no longer carry the risk of managing the facilitiesâ&#x20AC;?.