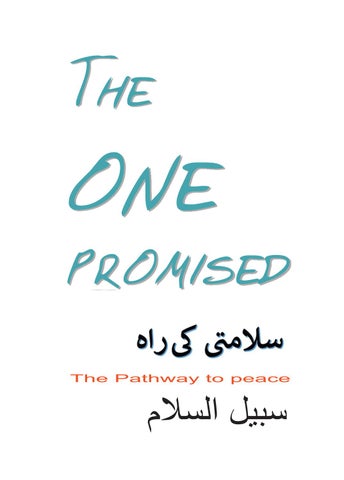 promised The Pathway to peace

Starting in the right place > Abraham What do you believe?

“I believe in the prophets”

Yes we read in Sura 2:87 “We gave Moses the Book and followed him up with a succession of Apostles; We gave Jesus the son of Mary clear (signs) and strengthened him with the holy spirit.” Jesus appears 25 times in the Quran, far more than anyone else

“If the Quran is true = the Bible is true” Did you know that the Quran makes; the Law (Torah), the Injil, and the Quran as equally authorative?

Sura 5:46 “But why do they come to thee for decision, when they have (their own) law before them?- therein is the (plain) command of God; ”; Sura 5:47 “It was We who revealed the Law (to Moses), therein was guidance and light...”; Sura 5:49 “We sent Jesus...confirming the law that had come before him; we sent him the Gospel therein is guidance and light, and confirmation of the Law.”'

“...But hasn’t the Bible been changed?” Sura 4:136 “...Believe in God and His Apostle, and the scripture which He hath sent to His Apostle and the scripture which He sent to those before (him).”; Sura 10:94 “If thou wert in doubt as to what We have revealed unto thee, then ask those who have been reading the Book from before thee: the Truth hath indeed come to thee from thy Lord.”; Sura 15:9 “We have, without doubt, sent down the Message; and We will assuredly guard it (from corruption).”; Sura 6:34 “there is none that can alter the words (and decrees) of God.”; Sura 10:64 “no change can there be in the words of God.” The Quran confirms that at that time, the Bible is God's Word and has not been changed... So was the Bible changed after the Quran had came?

written by 40 authors in different places over over 1500 years.

So let’s start at the beginning...

“What did Moses say?” The first five books (Torah) were written and compiled by Moses. They contain the account of God’s perfect creation and especially Adam and Eve, moral beings made in God’s image. When they sinned against God they were immediately banished from the garden. Selfishness and the resulting separation from God, suffering and death had come into the world. Yet at that time God promised Adam and Eve that he would one day send someone who would put things right. This promised one would make it possible for men and women to be forgiven, be at peace with God, and receive everlasting life. In the meantime God gave a picture of how that would happen. He called Abraham, that great man of faith, and told him to sacrifice his only son. God gave many pictures and symbols to show how a sinful man can approach a Holy God. Leviticus 10:3 Moses said: “This is what the LORD said: ‘Among those who approach me I will show myself holy’”. Through the Law (the writings of Moses and the prophets) God spoke of the only way God and Man can be at peace... That is through the sacrifice of an animal.

“How can I find peace with God?” What can I do to receive God’s favour and blessing?

Through prayers? Or fasting? What are you bringing? God says that the only thing that is acceptable to him is a perfect life. But who can bring that? So God told them instead to bring a perfect animal such as a lamb. The altar stood on the way in to the tabernacle, the tent symbolising God’s presence, the place where they could meet with God. His holiness and purity meant that no-one could come to him except through the altar of sacrifice, and that must be done in the right way. To come any other way would not be acceptable. God’s anger would remain on them, instead of the animal being burned up, they would be. (See Leviticus Chapters 9:24-10:2.) Moses described God as a consuming fire. Substitution - God averts the punishment due to the lawbreaker by directing it instead to the one being sacrificed as a substitute. Just as lightning might be averted onto someone else so the person is saved, at the expense of the other who dies.

“Without the shedding of blood there is no forgiveness”

All this was a picture until the promised one came.

They all point to one person only.

Speaking of Abraham we read in the book of Acts (13:23) “from this man’s descendants God has brought... the saviour Jesus as he promised”.

When the last prophet John saw Jesus he said: “look the lamb (sacrifice) of God who takes away sin”.

Rejected by those around, spat upon and beaten nearly to death, he was then cruelly put to death on the cross along with two criminals. The Bible speaks much of love, a God of love. Love always does what is best for the other person. Jesus willingly, gladly took on the role of the substitute and suffered giving up/sacrificing his life for others. After his burial, he was raised to life again. “He is not here; he has risen, just as he said. Come and see the place where he lay.” (Matthew 28:6)

Jesus’ resurrection from the dead confirms the work at the cross was completed and accepted. Now at last there is a way to be forgiven. That great enemy death and judgment has been conquered and the way to heaven open for all who trust in him. No more animal sacrifice!

Christ’s resurrection proves that we can trust the Bible, we can trust Jesus’s words. He is the one promised, he is God made man and therefore the most important person in the universe! He will return as Judge and condemn all who have not sought him for forgiveness but take freely to heaven all who have repented from their sins, deny themselves, and follow him.

One man’s story - As a Bangladeshi I was religious but my mind was not at rest, I was searching for peace and truth. I needed to find out more so I went back to my Christian friend. I listened to the good news of Jesus and started to see that what was wrong was my sinful heart. I Iearned of all that he had done for me and that he who had led a sinless life gave up that life to be punished so I don’t have to be at Judgment day. As I learned about these things I realised that my heart was not right with God, and therefore I was heading for God's punishment after I die. I had been told about God's solution, which is available for everyone. I knew that I needed to receive it for myself. I went to my house and prayed to Jesus that he would forgive me for my sins through his death on the cross. After I prayed I felt something of God's presence come into my heart, which satisfied the longings in my soul, and I had a sense of assurance that God had accepted and forgiven me. Since then I have continued to have this sense of assurance that I am right with God. He is now the Lord of my life. Will you turn to Christ and declare Him Lord of Jesus your life?... and follow millions who have done just that?

$ Thank you for reading this leaflet. If you would like to know more or receive the free ‘Life of Jesus’ booklet please email: Findingmore@fw1.co.uk. : Visit Islamexplained.com and Now-Ask.com è All Quran references are from the A.Yusuf Ali translation (including notes in brackets) è All Bible references are from the NIV (New International Version translation) $ *For a list of Bibles in the British Museum that precede the Quran, email: museums@fw1.co.uk. A good way to find out why all the prophets point to Jesus as the one God promised to come into this world to save sinners.

A good way to find out why all the prophets point to Jesus as the one God promised to come into this world to save sinners.