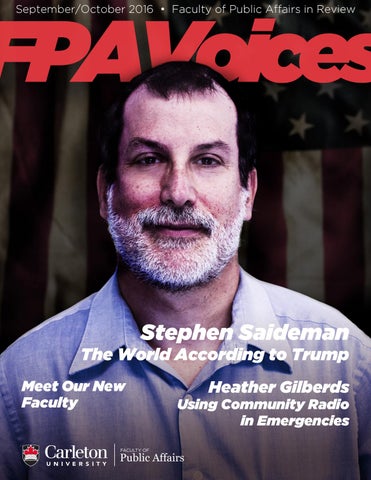 Stephen Saideman The World According to Trump Meet Our New Faculty

Message from our Dean

A university campus needs two important ingredients to thrive: students who are excited about learning and faculty members who are passionate about their subject matter. The Faculty of Public Affairs has both of these ingredients in abundance. Not only are our hallways and classrooms buzzing with the energy of students, we are welcoming fifteen new faculty members this year who are studying everything from finances for retirees to international human rights law (You can learn more on page 7.). These new colleagues will contribute to the thriving learning environment at FPA, which reflects our mission to improve governance and public policy, build better democracy and better societies, foster informed citizenship, and address regional and global challenges. At the same time, we’ve also revamped a number of academic programs, including the Bachelor of Communication and Media Studies. This reimagined degree blends the traditional critical analysis of media and communication with a more assertive emphasis on the development of analytical

across the university to propose solutions to a pressing environmental problem.

Lastly, I would like to say thank you to Leo Solano, who has been the creative force behind this e-magazine’s design since its inception. Leo will soon be taking on new challenges with a new position. Luckily, he will continue to apply his creativity to other projects here at Carleton University.

Paloma Raggo, School of Public Policy and Administration Alex Wilner, Norman Paterson School of International Affairs We are thrilled about the opportunities this funding offers both the researchers and the students who work with them and learn from them. Speaking of opportunities, students are currently being recruited to join the CU75POPS: Water competition, which will bring together teams of students from

"Thatâ&#x20AC;&#x2122;s the worst-case scenario from an international perspective."

What’s your greatest concern about the Trump campaign?

His praise for Russian President Vladimir Putin. Putin is a force for instability and Trump doesn’t seem to think that’s a problem, which is most worrying. Putin has been one of the major sources of threat to peace and security in Europe and in the Middle East. So countries around the world are trying to figure out what the American stance is going to be in the future.

The U.S. presidential debates between Hillary Clinton and Donald Trump were watched by millions of people around the world. Among them was Professor Stephen Saideman, who holds the Norman Paterson Chair in International Affairs at Carleton University’s Norman Paterson School of International Affairs (NPSIA). An expert on NATO and civil-military relations, Professor Saideman has been following the U.S. presidential campaign with keen interest.

This may affect world markets and it will certainly affect countries as they try to plan their defence spending. They have to figure out if the United States is reliable when one of the two major competitors is thoroughly unreliable.

What if Donald Trump wins?

After the first presidential debate, a member of the German Parliament was quoted as saying that Trump’s unpredictability posed “a great risk” to the trans-Atlantic alliance. As someone who studies these alliances, what’s your position? Trump is creating uncertainty. With that comes less stability and less security. I’ve had conversations with people around the world and they’re very concerned about a Trump presidency because they fear it would lead to the fraying of all the international institutions that Americans spent generations building.

That’s the worst-case scenario from an international perspective because he’s promised to default on the debt—or force the Chinese to renegotiate the debt—and he’s threatened to pull out of NATO and NAFTA. The other worse-case scenario is we see Russia on the march, taking over the Baltics because the NATO threat will no longer exist—because NATO will no longer exist.

Why do you see a Donald Trump victory as a threat to NATO? I think NATO would cease to exist because the United States would no longer be making credible promises to

defend Europe. For example, Donald Trump has talked about not supporting NATO countries if they were attacked, unless they pay their “fair share”. That is wildly ignorant because the Baltic countries bled in Afghanistan for the Americans, not for their own interests. No one in NATO cared about Afghanistan itself, but they went there in the aftermath of 9/11.

as more hawkish than Obama. Although the lesson of the last few wars is that we don’t do state building very well. But you might see a lot more gratitude in the world for the United States if she wins. The key is that the United States is a pivotal player and who leads it matters a lot. If we dodge Trump, everyone will breathe a sigh of relief.

"Hillary Clinton is running essentially on being the third term of the Obama presidency." How would Canada fare under a Trump presidency? It would be catastrophic. American credit would be unreliable which could lead to a shake-up in the world economy and a deep recession. So both the financial ramifications and the protectionist walls that Trump would put up would be very harmful to the Canadian economy.

What would you expect from a Clinton presidency from an international standpoint? Hillary Clinton is running essentially on being the third term of the Obama presidency. I think it would be more of the same, except she presents herself

Our New Faculty Liam Young, School of Journalism and Communication. Specializes in media history and theory, and the way human societies communicate.

Minjoon Lee, Department of Economics. Focuses on retirement income and the distributional effects of government policies.

Phillip Kaisary, Department of Law and Legal Studies. Studies legal and literary texts that have been generated by resistance and revolutions.

Hayden King, School of Public Policy and Administration. Specializes in land and resource management as well as Anishinaabe relations.

Nimo Bokore, School of Social Work. Working with female survivors of wars and the challenges of resettlement.

Other faculty not included in the photo:

Rebecca Bromwich, Department of Law and Legal Studies. Focuses on the treatment of women in the criminal justice system.

From the Foreign Service to foreign correspondents, FPA alumni lead fascinating and inspiring lives. In honour of Carleton University’s 75th anniversary in 2017, we’re profiling 75 of the Faculty of Public Affairs’ most inspiring alumni over the next year. We’ll release five new ones each month until June 2017.

Heather Gilberds, PhD student in the School of Journalism and Communication.

In 2012, Heather Gilberds was working for Farm Radio International in Malawi and Tanzania. The Canadian nongovernmental organization works with more than 500 radio partners in 38 African countries to meet the needs of small-scale farmers in rural communities. While Gilberds was working at Farm Radio International, the first Ebola outbreak was erupting in Liberia, where poor communication between the aid organizations and the local populace was exacerbating the situation. Gilberds wondered: Could Farm Radio International’s approach to communication be used in an emergency? “I talked to the executive director and we thought our method of training broadcasters, who are trusted local voices in communities, could be really useful in these countries if it was rapidly deployed,” recalls Gilberds. The idea inspired her to make that question the focus of her research for a PhD in Communication. “Specifically, I am now looking at how organizations involved in humanitarian response and reconstruction incorporate information technologies, communication methodologies, and feedback processes to mobilize citizens,” she explains.

Gilberds says the Ebola outbreak in Liberia exposed the limitations of a communications response that doesn’t easily collect and incorporate feedback or participation from the community. “It was prepackaged information that was blasted out at them,” she recalls. “There were a lot of rumors and the community was slow to mobilize. They didn’t trust the information.” Gilberds is currently in Liberia studying the communications breakdown that occurred during the crisis, with support from the International Development Research Centre of Canada. She advocates the idea of working with local radio stations to get ongoing feedback from the community about the challenges they’re facing, and the different and often conflicting things they are hearing. “North American frameworks don’t translate well in a post-conflict like Liberia, where there is a lot of mistrust in the government and the aid community” says Gilberds. “The biggest struggle to effectively communicate during a crisis is changing the mindset of those in the aid community who are committed to the traditional, top-down approach.”

Open Book The Book: Trapped in America’s Safety Net: One Family’s Struggle by Andrea Louise Campbell The Reviewer: Andrea Chandler, Professor in the Department of Political Science The author of this gripping work documents the recent experience of her sister-in-law, Marcella. Seriously injured in a car accident, Marcella suddenly needed medical and personal support services, which she will likely have to rely on permanently. Marcella and her husband find themselves trying to make sense of a baffling labyrinth of social welfare programs, each of which has daunting conditions for access. Since many of the programs the author’s sisterin-law needs are means-tested, it became virtually impossible for her family to earn even a moderate income without losing benefits. I found that this book told a very powerful personal story about how poorly-designed state policies can let down their citizens. The author, an expert on US social policy, describes how humbled she felt when she learned firsthand how confusing and demoralizing the system was to its clients. I appreciated the author’s candidness; having expertise about a problem does not automatically give one the ability to fix it. On the other hand, this story reminds us that emotions can motivate us to write the books that will inspire positive change.