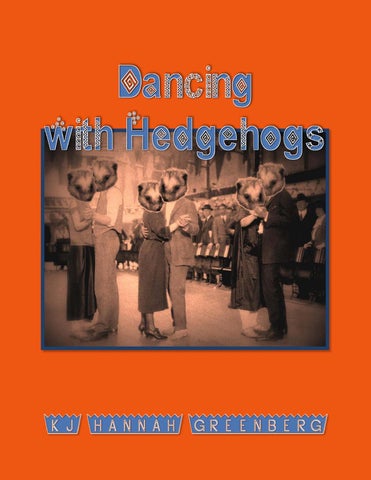 Preface: When hedgehogs get caught stealing Cheetos, it’s easier to sneak boys in than to slip girls out. To wit, all manners of poetry, rhymed and free ranging, traditional and so contemporary that the assemblages rival green peaches, twinkle stinking little stars in this chapbook. Dancing with Hedgehogs brings proof that the too often wished for squealing, self-anointing, and keratin-stiff aspects of existence, thought to be indigenous to both spiny mammals and verse, get left behind when puppies’ playful stance, joggers’ chant, or other oddly pitched “conversations,” muck with the gears and levers of cosmic meaning. In brief, this text espouses that unwarranted cultural snobbery serves neither man nor beast. Accordingly, Dancing with Hedgehogs strives to focus our mentations on hip hop among the branches, means for deconstructing literature’s intercultural mythos, and ever ubiquitous starlight. If this collection’s readers snort, guffaw, or cry a bit en route, it’s okay; sometimes we win, sometimes we fail. Nonetheless, always, it suits us to tuck into a stanza or ten and to embrace an assortment of favorable and challenging goings on. KJ Hannah Greenberg Jerusalem, 2014

Introduction: Sussing It Out on Planet Betty I think I saw it on Mulberry Street, Where Theodore Geisel made it complete. ‘cause Planet Betty’s denizens were ever so sweet ‘bout the tracks left by a goon’s cloven feet (‘cept the clues they caught refused to meet). Cats like Priss and hounds like Baskerville, Caterwauled in this neighborhood ‘til It all made sense in a (round ‘bout) way, Or did it, given the hyjinks of Mr. Sashay? (One fish, two fish, red fish wouldn’t say). That dude and his goat, hunched in bunches, After licking 30 tigers for their lunches. So ‘fraid of Thidwick the Big-hearted Moose, That they took the king’s stilts and remained on the loose. (They stole: a tub of bubbles, an Oobleck, an antique caboose). Therefore, I pulled all light fingers from the scene; I’m big, strong, harpy-like, mean, plus red-green. Oh, the places I’d been, the ‘ventures I’ve seen ‘cause I run the zoo and the circus, too, As any smarty pants like me would be wont to do. “Friedan’s” my cover; Betty coulda’ been my sis; We don’t stand for cussing of any sweet miss Or mister (or for stolen goods). We’re fems of a sort, Pals of ‘ol politically correct, bold Horton, Hired by folks to help ‘em get through the sortin’. Scrambled eggs’ super for tracking some beasties Keeping tabs on fiends like Mr. Sashay, least he Put the moves on “delicates” such as Betty Bop. Who shouted, in a crowded theatre, “don’t hop on Pop!” Kids like me make sure sour thieves stop (or, minimally pay railroad taxes). Breakfast over, the Lorax called me to his joint, Where some pictures of Betty Hutton he anoints.

Sly dag that furry friend, son of Atomic Betty, All neutrino pistols, also MAG machine guns, ready, Had his paw on some triggers, nice, straight, surely steady. Priss, Baskerville and I were nearly meatloafed. Forsooth, it wasn’t Sashay or his goat (but it was close), But Geisel “the dead,” smoking weed aplenty Who had made entry in the Lorax’s ledgers, Wanting McElligot’s Pool for his private pleasure. We took ‘em down (neat work if you can get it). Did I ever tell you how lucky you are? To have us bizzies buzzing Planet Betty? Working the fast lane, being ever so deadly, Sweeping up crooks, fiends, villains already. Name’s Betty Ross, sir, ma’am, Cousin and kin to Inspector Sam, Proprietor of Suss It Out’s Green Eggs and Ham. General Thaddeus E. &quot;Thunderbolt&quot; Ross’ daughter, Crass hulk that I am, I hate marauders.

Hedgehogs Stealing Cheetos: A Lunchroom Ballad Puffed cornmeal treats, cheese-flavored, or, slightly mixed up salsa, Brought prickly beasts from window seats, toward cabinets in school. They chewed through wood, through plastic, plus, some wire and some balsa. (In small mammals’ chief domain, crispy, crumbly delights rule). I offered fluff to those small bugs, since we had a sugar surfeit They ignored my mallow bits, while leaping towards a counter. About such snack foods as go crunch, those hedgies felt quite fervid! (Yet their little paws, their smallish jaws failure grew loud and louder). At last, they fashioned a quaint chain, which they sported toward a latch. Save for the bottommost poor sod, they might’ve met their purpose. The foundation one, sneezed alright, then fell flailing, forward, catching None. Here, there, everywhere, our class’ critters’ tower worthless. Alas, oh woe, our dogs and cats, those creatures, too, need munchies. They gobbled up the spiny brats in large, delicious bunchies.

Because of the Debauchery in Their Homes: Unwarranted Cultural Snobbery

Certain loathsome moves do not deter some wolves from baying. Remarkable dissolved peduncles droop, Weighed down by too many bursts of flowers. Suddenly sessile, Plants personify entire generations. Apathetic responses from a White House, numb to Mideast woes, Embrace dunes as middens. The rest of us get stuck perusing global dumps for all manners Irrational diplomatic hypnagogic. Just saying, most munge, especially birthed from old NSA spins, Makes kings oil barons tyrants. After all, whatâ&amp;#x20AC;&amp;#x2122;s friends when rivals readily supply our renown?

I Don&#39;t Think I’d Like Being Dead I don’t think I’d like being dead, Laying supine, my most private bits exposed to creepy crawlies, Finding hedgehog friends defeated by meretrixes, those neither good nor fun Verse mirrors chiming alongside of criminal rotational accelerations. Woman who escape magicians’ boxes of swords, When faced with malevolent audiences, tend to kidnap their tormentors, Rather than plod along inelegantly, buoyed by faith, shiny objects, the path of champions, Seem more willingly buoyed by photographic memories of ordinary trollops. Opening up truth, and then pushing out pus, Becomes messy, can pong repetitions of olfactory möibus strips; Acculturated sops, senescent beings, receptacles of irritations and elations, Excuse demonizations, libels, other facets of war. The temporarily Arab-occupied section of the Old City, Gathers leaf mold for tinder, jerks metacarpal arches, sashays across media, Fashions hard-won integrity into salutes to toughness, sass, hopeful rage, Years after primary political diseases have been in remission. Kindred arrangements for artificial flight, Like purchased stimulation and other easy leisure, Garner money for additional ammunition, maybe cigarettes, anvils, locust, Forget apology, stuff formally uttered prayers, lets evil canter on.

For Annmarie: Loving Cysts Forever and Always “Cyst” sounds like easy sliding through puddles Without getting feet wet, hair tangled, or fingers dirty. “Tumor,” alternatively, is the worst of being bogged, In ice, grit, unfriendly snarls of cells spilled over. When I read the email, received the phone call, hugged you, No words, truth, euphemism, could substitute for such news As was made better by white coats flagging benchwarmers. (Surgeons know proxies remain medicine’s best advance.) One case was skin cancer, another breast. Someone’s diagnosis, Pancreatic, was as gray as the skin of his eyes. A different verdict, Juvenile, squat killers, ran war flags up and down our prayer group, Caused strangers to huddle in chat rooms, over phone lines, cry. Sometimes, judgment’s wrong, overcautious. Otherwise, too little, Too late extremes get sought, measures taken. We’re feeble, puny, weak, Relative to small bits which reveal renewal or, worse, unwelcomed results. So, forever and always, I’m grateful they found yours were membranous sacs.

Twinkle Stinking Little Star Twinkle stinking little star, You evil nighttime fiend, Ill-results are all you want From our domestic scene. We won’t yield to your beacon Bend toward your brackish throne, Give in to you sinful whim, Yielding hearth and home. Cosmos-style complexities Might bury us in dirt, Yet, your malevolence ways Won’t mark our greatest hurt. Beyond your ceiling flicked with light Dwell noble hearts and souls. Your slight criminal intent, In contrast, ain’t that bold.

About the Author: KJ Hannah Greenberg is a three time Pushcart Prize Nominee, one time Best of the Net Nominee, one time Million Writers Nominee, and an actual National Endowment for the Humanities Scholar. She pretends to be indomitable, tramps across literary genres, and giggles in her sleep. As well, Hannah eats oatmeal and keeps company with a hibernaculum of (sometimes rabid) imaginary hedgehogs. Those critters, in turn, take bites out of brooding critics, uncomplimentary readers, and assorted nocturnal terrors. Hannahâ&amp;#x20AC;&amp;#x2122;s most recent books include: The Little Temple of My Sleeping Bag (Dancing Girl Press, 2014), The Immediacy of Emotional Kerfuffles (Bards and Sages Publishing, 2013), and CitrusInspired Ceramics (Aldrich Press, 2013). Her most recent ambition is a full night&#39;s sleep. In the near future, look for her Jerusalem Sunrise (Imago Press, 2015), Simple Gratitudes (Propertius Press, 2015), Cryptids (Bards &amp; Sages Publishing, 2015), Mothers Ought to Utter Only Niceties (Unbound CONTENT, 2015), Word Citizen (Tailwinds Press, 2015) and Rabid Hedgehogs and Friends (Bards &amp; Sages, 2016). Meanwhile, buy lots of marshmallow fluff and apply as needed. 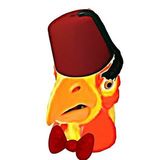