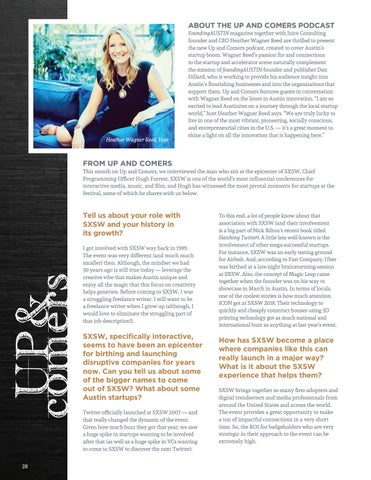 ABOUT THE UP AND COMERS PODCAST

FoundingAUSTIN magazine together with Juice Consulting founder and CEO Heather Wagner Reed are thrilled to present the new Up and Comers podcast, created to cover Austin’s startup boom. Wagner Reed’s passion for and connections to the startup and accelerator scene naturally complement the mission of foundingAUSTIN founder and publisher Dan Dillard, who is working to provide his audience insight into Austin’s flourishing businesses and into the organizations that support them. Up and Comers features guests in conversation with Wagner Reed on the latest in Austin innovation. “I am so excited to lead Austinites on a journey through the local startup world,” host Heather Wagner Reed says. “We are truly lucky to live in one of the most vibrant, pioneering, socially conscious, and entrepreneurial cities in the U.S. — it’s a great moment to shine a light on all the innovation that is happening here.”

FROM UP AND COMERS This month on Up and Comers, we interviewed the man who sits at the epicenter of SXSW, Chief Programming Officer Hugh Forrest. SXSW is one of the world’s most influential conferences for interactive media, music, and film, and Hugh has witnessed the most pivotal moments for startups at the festival, some of which he shares with us below.

Tell us about your role with SXSW and your history in its growth?

I got involved with SXSW way back in 1989. The event was very different (and much much smaller) then. Although, the mindset we had 30 years ago is still true today — leverage the creative vibe that makes Austin unique and enjoy all the magic that this focus on creativity helps generate. Before coming to SXSW, I was a struggling freelance writer. I still want to be a freelance writer when I grow up (although, I would love to eliminate the struggling part of that job description!).

SXSW, specifically interactive, seems to have been an epicenter for birthing and launching disruptive companies for years now. Can you tell us about some of the bigger names to come out of SXSW? What about some Austin startups? Twitter officially launched at SXSW 2007 — and that really changed the dynamic of the event. Given how much buzz they got that year, we saw a huge spike in startups wanting to be involved after that (as well as a huge spike in VCs wanting to come to SXSW to discover the next Twitter).

To this end, a lot of people know about that association with SXSW (and their involvement is a big part of Nick Bilton’s recent book titled Hatching Twitter). A little less well-known is the involvement of other mega-successful startups. For instance, SXSW was an early testing ground for Airbnb. And, according to Fast Company, Uber was birthed at a late-night brainstorming session at SXSW. Also, the concept of Magic Leap came together when the founder was on his way to showcase in March in Austin. In terms of locals, one of the coolest stories is how much attention ICON got at SXSW 2018. Their technology to quickly and cheaply construct houses using 3D printing technology got as much national and international buzz as anything at last year’s event.

How has SXSW become a place where companies like this can really launch in a major way? What is it about the SXSW experience that helps them? SXSW brings together so many first-adopters and digital trendsetters and media professionals from around the United States and across the world. The event provides a great opportunity to make a ton of impactful connections in a very short time. So, the ROI for badgeholders who are very strategic in their approach to the event can be extremely high.

Our cover features Louis Black, the Austin legend through SXSW and The Austin Chronicle. 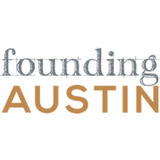