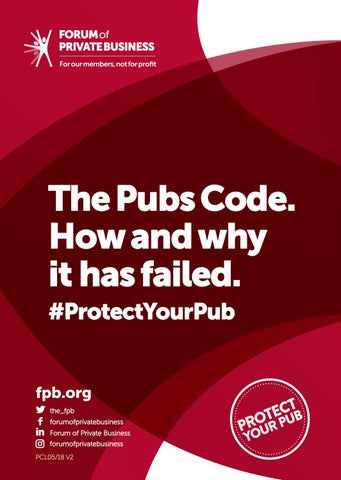 The Pubs Code. How and why it has failed. #ProtectYourPub

BACKGROUND A previous Conservative government passed the beer orders which had unforeseen impacts, the largest being that some brewers closed their breweries and decided to capitalise on their large pub estates, thus becoming landlords and retailers. This in effect led to the growth of both Enterprise Inns and Punch Taverns. As a result of these changes we saw a change from brewers with an estate of pubs, which were the brewersâ&#x20AC;&#x2122; shop windows, to property owning companies that used the power of their tie and the size of their estate to leverage their buying power with suppliers, other brewers and distillers. They also used the power of the tie to squeeze more value out of the pubs and tenants. Unfortunately, this kind of behaviour became the norm with a number of brewers, particularly the larger ones, following these unfair business practices.

â&#x20AC;&#x153;As a Conservative, I do not favour crony capitalism. That oligopolistic behaviour of the pubcos needed tackling, and it is to the credit of the previous government that they tackled it.â&#x20AC;? Stewart Jackson MP

As a result of this kind of behaviour, a number of government reviews took place and, following the trade’s failure to self-regulate, the government finally recognised the pub companies’ inability to willingly change. As a result, the Pub Code was brought in. The key principles of the Pub Code are to: 1. Remove unfair business practice from the sector. 2. Make pub operating business tenants no worse off than if they were free-of-tie. The financial crash in 2008 meant that a change in pub company behaviour was even more unlikely and a Pub Code Adjudicator (PCA) was appointed with the objectives of ensuring that unfair business practices were removed and that the tenants were no worse off than if they were freeof-tie. This would be achieved by means of a simple Market Rent Only (MRO) option that would be available to them.

“The Market Rent Only option is the central plank of the Pubs Code. It is a fundamental change for the industry and, I believe, a powerful new tool for tenants.” Lord Baroness Neville Rolfe

THE PUB CODE AND THE ADJUDICATOR HAVE FAILED! Since the implementation of the Pub Code, we believe that only a handful of tenants have achieved a true Market Rent Only option, through an agreement with their pub operating company and thousands have lost out. The pub companies continue to complicate the issue, confuse landlords, take excessive time in negotiations, deliberately mislead, hold back information, use tactics aimed at avoiding the Code and generally game the Code to their advantage. The gaming of the Code goes against its two main principals of removing unfair practices and ensuring that the pub tenants are no worse off than the free-of-tie. These unfair practices are being used to achieve compromise agreements which are not true MRO agreements as set out in the Code. While doing this, the pub companies are able to explore other pub operating models, such as growing their managed estate, franchise style agreements, change of use and selling off poorly performing pubs.

WHY HAS THE CODE FAILED? There was an assumption that the pub operating businesses would engage positively with the need to change. They have not and, if anything, the situation is worse than it was before the Pub Code came in. The government has failed to listen and act on what they were told by the people actually running the pubs on a day-to-day basis. The consequence being that these pub owners are now faced with many issues they don’t know how to deal with. There are a number of common tactics pub companies use to game the code which can be seen on our website www.fpb. org/getbritaintrading/protect-your-pub. The Adjudicator can only arbitrate, meaning each individual case is heard separately and the result confidential. This means that: 1. No one knows if a true MRO agreement is reached. 2. The Adjudicator’s decision has no memory and can’t set precedent. 3. If the PubCo, with its large resources, appeals the decision it goes to the High Court. The tenant is then faced with the costs in both money and time, so will avoid going down this path. This is key because a simple and cheap solution for pub tenants becomes anything but.

4. The Adjudicator was not trusted by tenants or their representative bodies from square one, because of perceived conflict of interests from the Adjudicator’s previous role in Fluerets. 5. The Adjudicator is unable to adjudicate and seems content with compromises between tenants and pub operators rather than following the true stated aim of the Code. He also seems content to let the High Court make decisions rather than improving the Code himself and ensuring that he has the power to make it work.

“After the crash of 2008, even if they became nice people over night, the Pubco’s couldn’t afford to behave any differently” Simon Clarke

WHY IS THIS IMPORTANT? We feel that we are witnessing the complete demise of the tenanted pub sector and this would be a tragedy. Itâ&#x20AC;&#x2122;s the only low cost route that many entrepreneurial operators have to get a foothold in the industry and to learn the trade. Many pub tenants are losing their livelihoods or living on less than the living wage. Many are ex-service people and public servants who have discovered that their dream career is a nightmare. The tenanted pub model is being tarnished by the behaviour of some of the bigger companies to the detriment of smaller regional brewers who run the model well. We are seeing the closure of pubs, a decline in quality and service, fewer truly professional landlords and an unwelcome change in the culture of the industry. On the other hand, we see ex-pub company pubs, which were claimed to be failing, sold as free-trade pubs and rising like a phoenix from the ashes.

WHAT DO WE WANT TO HAPPEN? The Protect Your Pub campaign wants to work with the Pub Code and the Adjudicator to make sure the code works as intended. To do this, we ask that the following six steps happen: 1. The Adjudicator has a review with the minister before the scheduled date of March 2019 to highlight the issues and to assess the powers he needs to ensure the aims of the code are being met. 2. The Pub Code Adjudicator needs to be able to adjudicate in line with his title. To achieve this, common gaming practices should be removed and the results of the arbitrationâ&#x20AC;&#x2122;s presented so that they are out in the open and transparent. It will also remove the High Court as the final arbiter. 3. There needs to be a simple process put in place with clear steps, actions and timescales for both tenant and pub operating business when an MRO application is triggered.

4. The Adjudicator needs to work with tenant bodies and the Pub Operating Business to create an education and training process for all new pub tenants along with suggestions to modernise the tenanted pub operating model so that it works for both sides. 5. A review needs to look at the role of the Adjudicator himself. If someone with another skill set is more suitable for the role the current Adjudicator needs to step down and a replacement appointed. 6. A future labour government needs to commit to a full and detailed review of the current tenant situation and, if appropriate, to remove the tie from nonbrewing pub operators.

Making Business Better For more information on how we can help your business simply contact our helpline team on 01565 626001, visit our website www.fpb.org or email us info@fpb.org.

Download the Forum app from the App Store and Google Play Store. Search for “My Advisor” and use passcode “Forum2018”. The Pubs Code: How and why it has failed - Labour Government

The Pubs Code: How and why it has failed - Labour Government