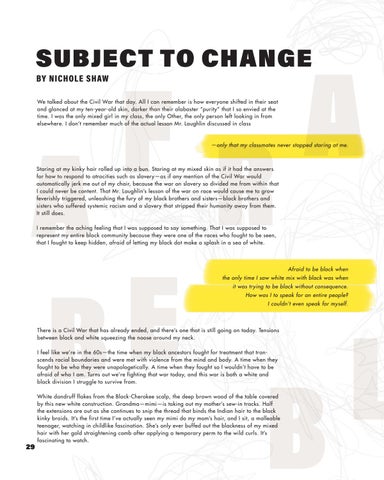 FR A E B L B BY NICHOLE SHAW

We talked about the Civil War that day. All I can remember is how everyone shifted in their seat and glanced at my ten-year-old skin, darker than their alabaster “purity” that I so envied at the time. I was the only mixed girl in my class, the only Other, the only person left looking in from elsewhere. I don’t remember much of the actual lesson Mr. Laughlin discussed in class

—only that my classmates never stopped staring at me.

Staring at my kinky hair rolled up into a bun. Staring at my mixed skin as if it had the answers for how to respond to atrocities such as slavery—as if any mention of the Civil War would automatically jerk me out of my chair, because the war on slavery so divided me from within that I could never be content. That Mr. Laughlin’s lesson of the war on race would cause me to grow feverishly triggered, unleashing the fury of my black brothers and sisters—black brothers and sisters who suffered systemic racism and a slavery that stripped their humanity away from them. It still does. I remember the aching feeling that I was supposed to say something. That I was supposed to represent my entire black community because they were one of the races who fought to be seen, that I fought to keep hidden, afraid of letting my black dot make a splash in a sea of white.

Afraid to be black when

the only time I saw white mix with black was when it was trying to be black without consequence. How was I to speak for an entire people? I couldn’t even speak for myself.

There is a Civil War that has already ended, and there’s one that is still going on today. Tensions between black and white squeezing the noose around my neck. I feel like we’re in the 60s—the time when my black ancestors fought for treatment that transcends racial boundaries and were met with violence from the mind and body. A time when they fought to be who they were unapologetically. A time when they fought so I wouldn’t have to be afraid of who I am. Turns out we’re fighting that war today, and this war is both a white and black division I struggle to survive from.

White dandruff flakes from the Black-Cherokee scalp, the deep brown wood of the table covered by this new white construction. Grandma—mimi—is taking out my mother’s sew-in tracks. Half the extensions are out as she continues to snip the thread that binds the Indian hair to the black kinky braids. It’s the first time I’ve actually seen my mimi do my mom’s hair, and I sit, a malleable teenager, watching in childlike fascination. She’s only ever buffed out the blackness of my mixed hair with her gold straightening comb after applying a temporary perm to the wild curls. It’s fascinating to watch. 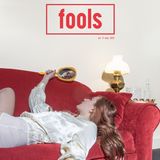