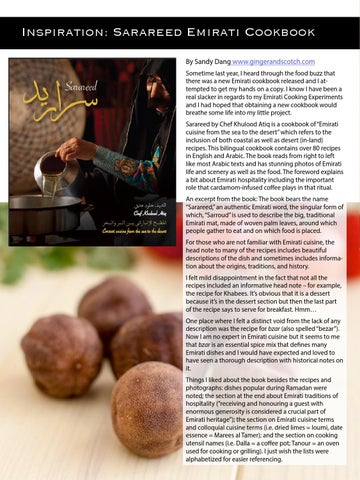 Inspiration: Sarareed Emirati Cookbook By Sandy Dang www.gingerandscotch.com Sometime last year, I heard through the food buzz that there was a new Emirati cookbook released and I attempted to get my hands on a copy. I know I have been a real slacker in regards to my Emirati Cooking Experiments and I had hoped that obtaining a new cookbook would breathe some life into my little project. Sarareed by Chef Khulood Atiq is a cookbook of “Emirati cuisine from the sea to the desert” which refers to the inclusion of both coastal as well as desert (in-land) recipes. This bilingual cookbook contains over 80 recipes in English and Arabic. The book reads from right to left like most Arabic texts and has stunning photos of Emirati life and scenery as well as the food. The foreword explains a bit about Emirati hospitality including the important role that cardamom-infused coffee plays in that ritual. An excerpt from the book: The book bears the name “Sarareed,” an authentic Emirati word, the singular form of which, “Sarroud” is used to describe the big, traditional Emirati mat, made of woven palm leaves, around which people gather to eat and on which food is placed. For those who are not familiar with Emirati cuisine, the head note to many of the recipes includes beautiful descriptions of the dish and sometimes includes information about the origins, traditions, and history. I felt mild disappointment in the fact that not all the recipes included an informative head note – for example, the recipe for Khabees. It’s obvious that it is a dessert because it’s in the dessert section but then the last part of the recipe says to serve for breakfast. Hmm… One place where I felt a distinct void from the lack of any description was the recipe for bzar (also spelled “bezar”). Now I am no expert in Emirati cuisine but it seems to me that bzar is an essential spice mix that defines many Emirati dishes and I would have expected and loved to have seen a thorough description with historical notes on it. Things I liked about the book besides the recipes and photographs: dishes popular during Ramadan were noted; the section at the end about Emirati traditions of hospitality (“receiving and honouring a guest with enormous generosity is considered a crucial part of Emirati heritage”); the section on Emirati cuisine terms and colloquial cuisine terms (i.e. dried limes = loumi, date essence = Marees al Tamer); and the section on cooking utensil names (i.e. Dalla = a coffee pot; Tanour = an oven used for cooking or grilling). I just wish the lists were alphabetized for easier referencing. 8 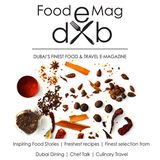