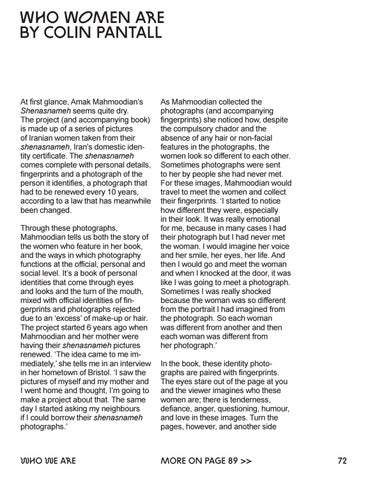 wHo wOmen aRe By COLIN PANTALL

At first glance, Amak Mahmoodian’s Shenasnameh seems quite dry. The project (and accompanying book) is made up of a series of pictures of Iranian women taken from their shenasnameh, Iran’s domestic identity certificate. The shenasnameh comes complete with personal details, fingerprints and a photograph of the person it identifies, a photograph that had to be renewed every 10 years, according to a law that has meanwhile been changed. Through these photographs, Mahmoodian tells us both the story of the women who feature in her book, and the ways in which photography functions at the official, personal and social level. It’s a book of personal identities that come through eyes and looks and the turn of the mouth, mixed with official identities of fingerprints and photographs rejected due to an ‘excess’ of make-up or hair. The project started 6 years ago when Mahmoodian and her mother were having their shenasnameh pictures renewed. ‘The idea came to me immediately,’ she tells me in an interview in her hometown of Bristol. ‘I saw the pictures of myself and my mother and I went home and thought, I’m going to make a project about that. The same day I started asking my neighbours if I could borrow their shenasnameh photographs.’

As Mahmoodian collected the photographs (and accompanying fingerprints) she noticed how, despite the compulsory chador and the absence of any hair or non-facial features in the photographs, the women look so different to each other. Sometimes photographs were sent to her by people she had never met. For these images, Mahmoodian would travel to meet the women and collect their fingerprints. ‘I started to notice how different they were, especially in their look. It was really emotional for me, because in many cases I had their photograph but I had never met the woman. I would imagine her voice and her smile, her eyes, her life. And then I would go and meet the woman and when I knocked at the door, it was like I was going to meet a photograph. Sometimes I was really shocked because the woman was so different from the portrait I had imagined from the photograph. So each woman was different from another and then each woman was different from her photograph.’ In the book, these identity photographs are paired with fingerprints. The eyes stare out of the page at you and the viewer imagines who these women are; there is tenderness, defiance, anger, questioning, humour, and love in these images. Turn the pages, however, and another side 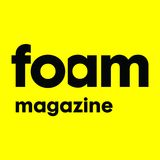 PREVIEW Foam Magazine #46, Who We Are

Want the full issue? Go to shop.foam.org. Who are you? At first glance, it appears to be a straightforward question, and one that - in most...

PREVIEW Foam Magazine #46, Who We Are

Want the full issue? Go to shop.foam.org. Who are you? At first glance, it appears to be a straightforward question, and one that - in most...