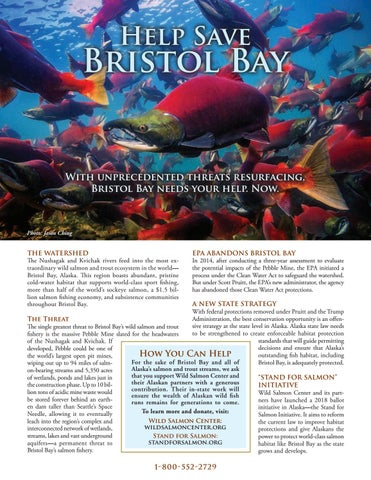 THE WATERSHED The Nushagak and Kvichak rivers feed into the most extraordinary wild salmon and trout ecosystem in the world— Bristol Bay, Alaska. This region boasts abundant, pristine cold-water habitat that supports world-class sport fishing, more than half of the world’s sockeye salmon, a $1.5 billion salmon fishing economy, and subsistence communities throughout Bristol Bay.

EPA ABANDONS BRISTOL BAY In 2014, after conducting a three-year assessment to evaluate the potential impacts of the Pebble Mine, the EPA initiated a process under the Clean Water Act to safeguard the watershed. But under Scott Pruitt, the EPA’s new administrator, the agency has abandoned those Clean Water Act protections.

A NEW STATE STRATEGY With federal protections removed under Pruitt and the Trump Administration, the best conservation opportunity is an offenThe Threat sive strategy at the state level in Alaska. Alaska state law needs The single greatest threat to Bristol Bay’s wild salmon and trout to be strengthened to create enforceable habitat protection fishery is the massive Pebble Mine slated for the headwaters standards that will guide permitting of the Nushagak and Kvichak. If decisions and ensure that Alaska’s developed, Pebble could be one of How You Can Help outstanding fish habitat, including the world’s largest open pit mines, For the sake of Bristol Bay and all of Bristol Bay, is adequately protected. wiping out up to 94 miles of salmAlaska’s salmon and trout streams, we ask on-bearing streams and 5,350 acres that you support Wild Salmon Center and of wetlands, ponds and lakes just in “STAND FOR SALMON” their Alaskan partners with a generous the construction phase. Up to 10 bilINITIATIVE contribution. Their in-state work will lion tons of acidic mine waste would Wild Salmon Center and its partensure the wealth of Alaskan wild fish be stored forever behind an earthners have launched a 2018 ballot runs remains for generations to come. en dam taller than Seattle’s Space initiative in Alaska—the Stand for To learn more and donate, visit: Needle, allowing it to eventually Salmon Initiative. It aims to reform Wild Salmon Center: leach into the region’s complex and the current law to improve habitat wildsalmoncenter.org interconnected network of wetlands, protections and give Alaskans the streams, lakes and vast underground Stand for Salmon: power to protect world-class salmon standforsalmon.org aquifers—a permanent threat to habitat like Bristol Bay as the state Bristol Bay’s salmon fishery. grows and develops.

The Nushagak and Kvichak rivers feed into the most extraordinary wild salmon and trout ecosystem in the world— Bristol Bay, Alaska. This reg...

The Nushagak and Kvichak rivers feed into the most extraordinary wild salmon and trout ecosystem in the world— Bristol Bay, Alaska. This reg...