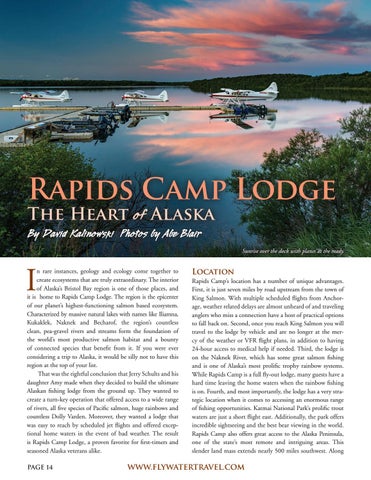 Rapids Camp Lodge The Heart of Alaska By David Kalinowski Photos by Abe Blair Sunrise over the dock with planes at the ready.

n rare instances, geology and ecology come together to create ecosystems that are truly extraordinary. The interior of Alaska’s Bristol Bay region is one of those places, and it is home to Rapids Camp Lodge. The region is the epicenter of our planet’s highest-functioning salmon based ecosystem. Characterized by massive natural lakes with names like Iliamna, Kukaklek, Naknek and Becharof, the region’s countless clean, pea-gravel rivers and streams form the foundation of the world’s most productive salmon habitat and a bounty of connected species that benefit from it. If you were ever considering a trip to Alaska, it would be silly not to have this region at the top of your list. That was the rightful conclusion that Jerry Schults and his daughter Amy made when they decided to build the ultimate Alaskan fishing lodge from the ground up. They wanted to create a turn-key operation that offered access to a wide range of rivers, all five species of Pacific salmon, huge rainbows and countless Dolly Varden. Moreover, they wanted a lodge that was easy to reach by scheduled jet flights and offered exceptional home waters in the event of bad weather. The result is Rapids Camp Lodge, a proven favorite for first-timers and seasoned Alaska veterans alike. PAGE 14

Location Rapids Camp’s location has a number of unique advantages. First, it is just seven miles by road upstream from the town of King Salmon. With multiple scheduled flights from Anchorage, weather related delays are almost unheard of and traveling anglers who miss a connection have a host of practical options to fall back on. Second, once you reach King Salmon you will travel to the lodge by vehicle and are no longer at the mercy of the weather or VFR flight plans, in addition to having 24-hour access to medical help if needed. Third, the lodge is on the Naknek River, which has some great salmon fishing and is one of Alaska’s most prolific trophy rainbow systems. While Rapids Camp is a full fly-out lodge, many guests have a hard time leaving the home waters when the rainbow fishing is on. Fourth, and most importantly, the lodge has a very strategic location when it comes to accessing an enormous range of fishing opportunities. Katmai National Park’s prolific trout waters are just a short flight east. Additionally, the park offers incredible sightseeing and the best bear viewing in the world. Rapids Camp also offers great access to the Alaska Peninsula, one of the state’s most remote and intriguing areas. This slender land mass extends nearly 500 miles southwest. Along

RAPIDS CAMP LODGE its westerly course, snowcapped volcanoes rise upwards from sea level, and in their shadow anglers find some of the least-visited Pacific salmon, large char and trophy grayling fisheries in the state.

The Fisheries By and large fly anglers flock to the greater Bristol Bay area for abundant rainbow trout, arctic char and Dolly Varden. This is not to say that king salmon and silver salmon as well as the other Pacific salmon are not a key component to the sports fishery, yet were it not for the tens of millions of sockeye salmon that return to these rivers each season, these coveted trout fisheries would not exist. The key to the entire region’s vibrancy, be it from the perspective of a brown bear, a rainbow trout or a fly angler, is the inland migration of ocean-fed salmon biomass that essentially feeds and fertilizes the entire Bristol Bay interior. The following is an overview of some of Rapids Camp’s favorite and most frequented systems.

Naknek River: Rapids Camp Lodge overlooks the remarkable Naknek River, which is one of Alaska’s sockeye superhighways. With annual returns of sockeye nearing 5 million fish, it supplies the greater Katmai Park region with

the biomass to support trout of epic proportions as well as some of the greatest brown bear densities on Earth. In addition to great king and silver fishing, the Naknek is a truly world-class rainbow fishery and produces some of the largest and strongest rainbows in the state. The rainbow fishing is particularly impressive during the early season when the big rainbows slash through schools of downstream migrating salmon smolt and again later in September when they are trying to put on a few extra pounds before winter sets in.

Kulik River: Kulik has long been one of the region’s most famous rivers, in large part due to the incredibly high catch rates it provides visiting anglers. It is a short, broad, easy-to-wade system that is loaded with trout and bears and fully deserves its reputation as a classic. Moraine Creek: The Moraine and its key tributary Funnel Creek are home to huge returns of sockeyes and as a result impressive numbers of large rainbows. Anglers typically fly into small lakes near the river and then hike to where their guides inflate rafts. Moraine can produce some really large fish as well as some super sight fishing opportunities. Battle Creek: Battle Creek is an easily waded, low gradient tributary of Kukaklek Lake. While it is a small system by Alaskan standards, the fish here are anything but.

RAPIDS CAMP LODGE With gin-clear waters and fantastic sight fishing opportunities it’s easy to see why this river continues to be a staple.

the river through large windows. Guests can connect to the outside world through their high speed internet and enjoy a large bar with complimentary house wines and tap beer. The Little Ku: The Little Ku is another Kukaklek tributary lodge also has a liquor license so let them know in advance if that has easy walk-in access and great opportunities to sight there is something special you would like. After angling, enterfish to rainbow trout and Dollies. It is also a great place to get up close and personal with big brown bears. tainment includes shuffleboard, foosball and darts. There is also a flat screen television behind the Remote Small Streams: For anglers bar for big games or breaking news. The lodge with strong walking legs and a sense of advenalso has a smoking room for cigars, a sauna, ture, Rapids Camp offers a handful of rainhot tub and fulltime masseuse on staff. bow and char systems that are too small and Morrish Meals are an equally serious affair with special to be named. For the right folks, these systems Sc u l pin can be a real highlight. two professional chefs responsible for hearty breakfast buffets and dinners featuring fresh local seafood, prime cuts of Smokey: For spey anglers wanting to experience the pull of meat and some great local Alaskan fare. All dinners are paired big king salmon, Rapids Camp offers a remote river they sewith thoughtfully selected bottled wines. cretively call “Smokey.” With no crowds, fantastic swing water, and lots of action from willing kings and chums, Smokey is a winner.

Nushagak River: The “Nush” is home to Alaska’s largest returns of king salmon. Guests of any skill level can fish these brutes with conventional gear and spey anglers also do well. Later in August, the Nushagak fills with thousands of fly-friendly silver salmon, making for great sport. The Lower Peninsula: With the exception of Rapids Camp, few lodges are located far enough west to take advantage of the bounty of the northern reaches of the Alaskan Peninsula. Rapids Camp not only fishes some incredible silver salmon and king systems, but they have several forgiving trophy char systems virtually to themselves.

Lodge Life Rapids Camp is a casual but well-appointed lodge that accommodates 16 guests in eight double occupancy rooms, all with private baths. They also have a two bedroom “house on the hill,” perfect for families, that can accommodate four guests for a maximum capacity of 20 guests per week. Their lounge area has comfortable couches overlooking

One of the great beauties of Rapids Camp is that you can essentially show up with a change of clothes and a toothbrush and not worry a bit about your fishing needs. From breathable waders and rubber soled boots, spey rods to spinning rods, they have it all and it is included. You are always welcome to bring your own gear and flies, but it is truly optional. Likewise, the lodge has one of the state’s most spectacular fleets of deHavilland aircrafts, with two Beavers and one turbine Otter. With the highest seat-to-guest ratio of any fly-out lodge in Alaska, this means guests wait only on weather and have the greatest possible number of angling options at their disposal. Last but not least, the lodge has an extensive fleet of jetboats stashed at various rivers, comfortable lodge-based boats for fishing the home waters and rafts that your guide can pack into small remote systems. Add to this included air charter service from Anchorage to the lodge and their commitment to personalized service, and we are confident you will be hard-pressed to find a better trip to Alaska!

Travel: Anglers fly to Anchorage. Guests who can arrive before 1pm can charter directly into the lodge, otherwise guests will overnight in Anchorage and take the private charter in the following day. Season: June through September Capacity: 20 maximum Essential Tackle: While the lodge can supply all the tackle, if we were to bring one rod it would be a 7-wt with a floating line 2017 Rate: $8,695 per person for a 7 night/6 day package

Top: Swing fishing for kings on the Peninsula, lodge manager Dan Herrig and the author with a Naknek double. Middle: The main lounge 1-800 PAGE 17 area at the lodge. Bottom: A small stream rainbow, halibut night,-552-2729 an aerial view of the lodge.

In rare instances, geology and ecology come together to create ecosystems that are truly extraordinary. The interior of Alaska’s Bristol Bay...

In rare instances, geology and ecology come together to create ecosystems that are truly extraordinary. The interior of Alaska’s Bristol Bay...