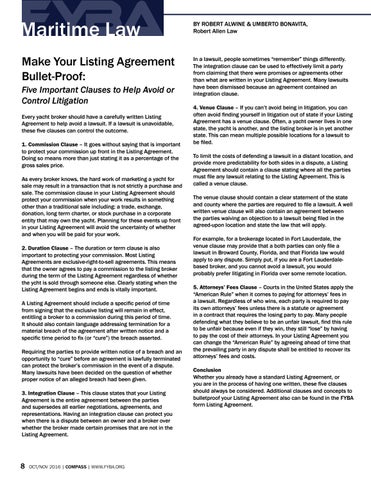 Maritime Law Make Your Listing Agreement Bullet-Proof: Five Important Clauses to Help Avoid or Control Litigation Every yacht broker should have a carefully written Listing Agreement to help avoid a lawsuit. If a lawsuit is unavoidable, these five clauses can control the outcome. 1. Commission Clause – It goes without saying that is important to protect your commission up front in the Listing Agreement. Doing so means more than just stating it as a percentage of the gross sales price. As every broker knows, the hard work of marketing a yacht for sale may result in a transaction that is not strictly a purchase and sale. The commission clause in your Listing Agreement should protect your commission when your work results in something other than a traditional sale including: a trade, exchange, donation, long term charter, or stock purchase in a corporate entity that may own the yacht. Planning for these events up front in your Listing Agreement will avoid the uncertainty of whether and when you will be paid for your work. 2. Duration Clause – The duration or term clause is also important to protecting your commission. Most Listing Agreements are exclusive-right-to-sell agreements. This means that the owner agrees to pay a commission to the listing broker during the term of the Listing Agreement regardless of whether the ycht is sold through someone else. Clearly stating when the Listing Agreement begins and ends is vitally important. A Listing Agreement should include a specific period of time from signing that the exclusive listing will remain in effect, entitling a broker to a commission during this period of time. It should also contain language addressing termination for a material breach of the agreement after written notice and a specific time period to fix (or “cure”) the breach asserted. Requiring the parties to provide written notice of a breach and an opportunity to “cure” before an agreement is lawfully terminated can protect the broker’s commission in the event of a dispute. Many lawsuits have been decided on the question of whether proper notice of an alleged breach had been given. 3. Integration Clause – This clause states that your Listing Agreement is the entire agreement between the parties and supersedes all earlier negotiations, agreements, and representations. Having an integration clause can protect you when there is a dispute between an owner and a broker over whether the broker made certain promises that are not in the Listing Agreement.

In a lawsuit, people sometimes “remember” things differently. The integration clause can be used to effectively limit a party from claiming that there were promises or agreements other than what are written in your Listing Agreement. Many lawsuits have been dismissed because an agreement contained an integration clause. 4. Venue Clause – If you can’t avoid being in litigation, you can often avoid finding yourself in litigation out of state if your Listing Agreement has a venue clause. Often, a yacht owner lives in one state, the yacht is another, and the listing broker is in yet another state. This can mean multiple possible locations for a lawsuit to be filed. To limit the costs of defending a lawsuit in a distant location, and provide more predictability for both sides in a dispute, a Listing Agreement should contain a clause stating where all the parties must file any lawsuit relating to the Listing Agreement. This is called a venue clause. The venue clause should contain a clear statement of the state and county where the parties are required to file a lawsuit. A well written venue clause will also contain an agreement between the parties waiving an objection to a lawsuit being filed in the agreed-upon location and state the law that will apply. For example, for a brokerage located in Fort Lauderdale, the venue clause may provide that a both parties can only file a lawsuit in Broward County, Florida, and that Florida law would apply to any dispute. Simply put, if you are a Fort Lauderdalebased broker, and you cannot avoid a lawsuit, you would probably prefer litigating in Florida over some remote location. 5. Attorneys’ Fees Clause – Courts in the United States apply the “American Rule” when it comes to paying for attorneys’ fees in a lawsuit. Regardless of who wins, each party is required to pay its own attorneys’ fees unless there is a statute or agreement in a contract that requires the losing party to pay. Many people defending what they believe to be an unfair lawsuit, find this rule to be unfair because even if they win, they still “lose” by having to pay the cost of their attorneys. In your Listing Agreement you can change the “American Rule” by agreeing ahead of time that the prevailing party in any dispute shall be entitled to recover its attorneys’ fees and costs. Conclusion Whether you already have a standard Listing Agreement, or you are in the process of having one written, these five clauses should always be considered. Additional clauses and concepts to bulletproof your Listing Agreement also can be found in the FYBA form Listing Agreement. 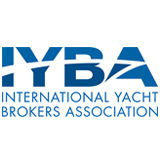