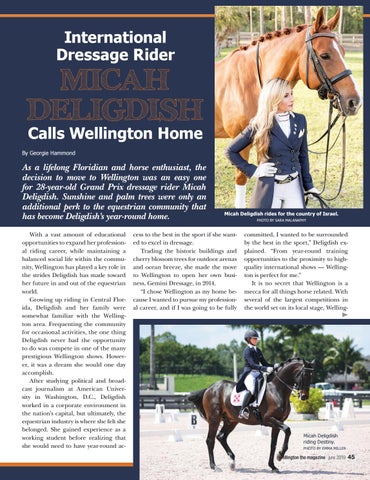 As a lifelong Floridian and horse enthusiast, the decision to move to Wellington was an easy one for 28-year-old Grand Prix dressage rider Micah Deligdish. Sunshine and palm trees were only an additional perk to the equestrian community that has become Deligdish’s year-round home. With a vast amount of educational opportunities to expand her professional riding career, while maintaining a balanced social life within the community, Wellington has played a key role in the strides Deligdish has made toward her future in and out of the equestrian world. Growing up riding in Central Florida, Deligdish and her family were somewhat familiar with the Wellington area. Frequenting the community for occasional activities, the one thing Deligdish never had the opportunity to do was compete in one of the many prestigious Wellington shows. However, it was a dream she would one day accomplish. After studying political and broadcast journalism at American University in Washington, D.C., Deligdish worked in a corporate environment in the nation’s capital, but ultimately, the equestrian industry is where she felt she belonged. She gained experience as a working student before realizing that she would need to have year-round ac-

Micah Deligdish rides for the country of Israel.

cess to the best in the sport if she wanted to excel in dressage. Trading the historic buildings and cherry blossom trees for outdoor arenas and ocean breeze, she made the move to Wellington to open her own business, Gemini Dressage, in 2014. “I chose Wellington as my home because I wanted to pursue my professional career, and if I was going to be fully

committed, I wanted to be surrounded by the best in the sport,” Deligdish explained. “From year-round training opportunities to the proximity to highquality international shows — Wellington is perfect for me.” It is no secret that Wellington is a mecca for all things horse related. With several of the largest competitions in the world set on its local stage, Welling-

June 2019 | ON THE COVER Francesca Herman and Sebastian Suarez, inaugural recipients of the Arle and Ken Adams Scholarship, photographed at...

June 2019 | ON THE COVER Francesca Herman and Sebastian Suarez, inaugural recipients of the Arle and Ken Adams Scholarship, photographed at...