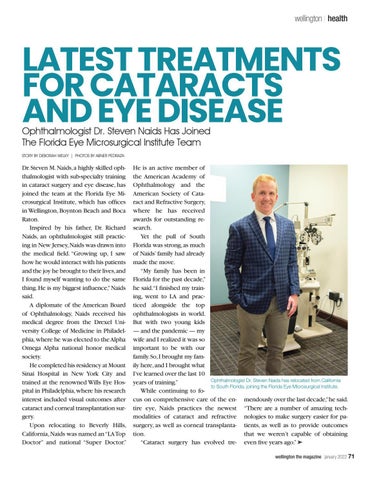 Dr. Steven M. Naids, a highly skilled ophthalmologist with sub-specialty training in cataract surgery and eye disease, has joined the team at the Florida Eye Microsurgical Institute, which has offices in Wellington, Boynton Beach and Boca Raton. Inspired by his father, Dr. Richard Naids, an ophthalmologist still practicing in New Jersey, Naids was drawn into the medical field. “Growing up, I saw how he would interact with his patients and the joy he brought to their lives, and I found myself wanting to do the same thing. He is my biggest influence,” Naids said. A diplomate of the American Board of Ophthalmology, Naids received his medical degree from the Drexel University College of Medicine in Philadelphia, where he was elected to the Alpha Omega Alpha national honor medical society. He completed his residency at Mount Sinai Hospital in New York City and trained at the renowned Wills Eye Hospital in Philadelphia, where his research interest included visual outcomes after cataract and corneal transplantation surgery. Upon relocating to Beverly Hills, California, Naids was named an “LA Top Doctor” and national “Super Doctor.”

He is an active member of the American Academy of Ophthalmology and the American Society of Cataract and Refractive Surgery, where he has received awards for outstanding research. Yet the pull of South Florida was strong, as much of Naids’ family had already made the move. “My family has been in Florida for the past decade,” he said.“I finished my training, went to LA and practiced alongside the top ophthalmologists in world. But with two young kids — and the pandemic — my wife and I realized it was so important to be with our family. So, I brought my family here, and I brought what I’ve learned over the last 10 Ophthalmologist Dr. Steven Naids has relocated from California years of training.” to South Florida, joining the Florida Eye Microsurgical Institute. While continuing to focus on comprehensive care of the en- mendously over the last decade,” he said. tire eye, Naids practices the newest “There are a number of amazing techmodalities of cataract and refractive nologies to make surgery easier for pasurgery, as well as corneal transplanta- tients, as well as to provide outcomes that we weren’t capable of obtaining tion. “Cataract surgery has evolved tre- even five years ago.” wellington the magazine | january 2022 71