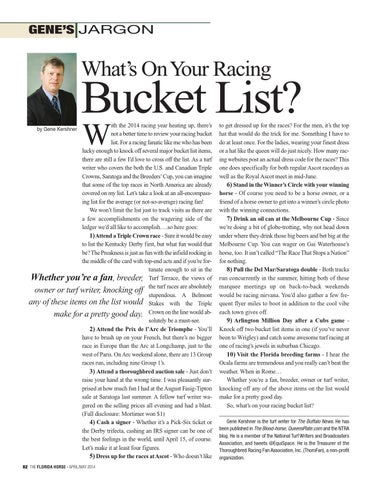 What’s On Your Racing by Gene Kershner

ith the 2014 racing year heating up, there’s not a better time to review your racing bucket list. For a racing fanatic like me who has been lucky enough to knock off several major bucket list items, there are still a few I’d love to cross off the list. As a turf writer who covers the both the U.S. and Canadian Triple Crowns, Saratoga and the Breeders’ Cup, you can imagine that some of the top races in North America are already covered on my list. Let’s take a look at an all-encompassing list for the average (or not-so-average) racing fan! We won’t limit the list just to track visits as there are a few accomplishments on the wagering side of the ledger we’d all like to accomplish….so here goes: 1) Attend a Triple Crown race - Sure it would be easy to list the Kentucky Derby first, but what fun would that be? The Preakness is just as fun with the infield rocking in the middle of the card with top-end acts and if you’re fortunate enough to sit in the , breeder, Turf Terrace, the views of owner or turf writer, knocking off the turf races are absolutely stupendous. A Belmont any of these items on the list would Stakes with the Triple make for a pretty good day. Crown on the line would absolutely be a must-see. 2) Attend the Prix de l’Arc de Triomphe - You’ll have to brush up on your French, but there’s no bigger race in Europe than the Arc at Longchamp, just to the west of Paris. On Arc weekend alone, there are 13 Group races run, including nine Group 1’s. 3) Attend a thoroughbred auction sale - Just don’t raise your hand at the wrong time. I was pleasantly surprised at how much fun I had at the August Fasig-Tipton sale at Saratoga last summer. A fellow turf writer wagered on the selling prices all evening and had a blast. (Full disclosure: Mortimer won $1) 4) Cash a signer - Whether it’s a Pick-Six ticket or the Derby trifecta, cashing an IRS signer can be one of the best feelings in the world, until April 15, of course. Let’s make it at least four figures. 5) Dress up for the races at Ascot - Who doesn’t like

Whether you’re a fan

to get dressed up for the races? For the men, it’s the top hat that would do the trick for me. Something I have to do at least once. For the ladies, wearing your finest dress or a hat like the queen will do just nicely. How many racing websites post an actual dress code for the races? This one does specifically for both regular Ascot racedays as well as the Royal Ascot meet in mid-June. 6) Stand in the Winner’s Circle with your winning horse - Of course you need to be a horse owner, or a friend of a horse owner to get into a winner’s circle photo with the winning connections. 7) Drink an oil can at the Melbourne Cup - Since we’re doing a bit of globe-trotting, why not head down under where they drink those big beers and bet big at the Melbourne Cup. You can wager on Gai Waterhouse’s horse, too. It isn’t called “The Race That Stops a Nation” for nothing. 8) Pull the Del Mar/Saratoga double - Both tracks run concurrently in the summer, hitting both of these marquee meetings up on back-to-back weekends would be racing nirvana. You’d also gather a few frequent flyer miles to boot in addition to the cool vibe each town gives off. 9) Arlington Million Day after a Cubs game Knock off two bucket list items in one (if you’ve never been to Wrigley) and catch some awesome turf racing at one of racing’s jewels in suburban Chicago. 10) Visit the Florida breeding farms - I hear the Ocala farms are tremendous and you really can’t beat the weather. When in Rome… Whether you’re a fan, breeder, owner or turf writer, knocking off any of the above items on the list would make for a pretty good day. So, what’s on your racing bucket list? Gene Kershner is the turf writer for The Buffalo News. He has been published in The Blood-horse, QueensPlate.com and the NTRA blog. He is a member of the National Turf Writers and Broadcasters Association, and tweets @EquiSpace. He is the Treasurer of the Thoroughbred Racing Fan Association, Inc. (ThoroFan), a non-profit organization.