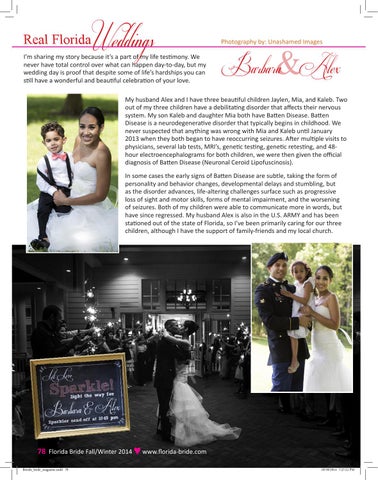 I’m sharing my story because it’s a part of my life testimony. We never have total control over what can happen day-to-day, but my wedding day is proof that despite some of life’s hardships you can still have a wonderful and beautiful celebration of your love.

My husband Alex and I have three beautiful children Jaylen, Mia, and Kaleb. Two out of my three children have a debilitating disorder that affects their nervous system. My son Kaleb and daughter Mia both have Batten Disease. Batten Disease is a neurodegenerative disorder that typically begins in childhood. We never suspected that anything was wrong with Mia and Kaleb until January 2013 when they both began to have reoccurring seizures. After multiple visits to physicians, several lab tests, MRI’s, genetic testing, genetic retesting, and 48hour electroencephalograms for both children, we were then given the official diagnosis of Batten Disease (Neuronal Ceroid Lipofuscinosis). In some cases the early signs of Batten Disease are subtle, taking the form of personality and behavior changes, developmental delays and stumbling, but as the disorder advances, life-altering challenges surface such as progressive loss of sight and motor skills, forms of mental impairment, and the worsening of seizures. Both of my children were able to communicate more in words, but have since regressed. My husband Alex is also in the U.S. ARMY and has been stationed out of the state of Florida, so I’ve been primarily caring for our three children, although I have the support of family-friends and my local church. 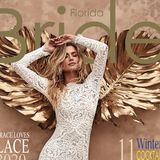