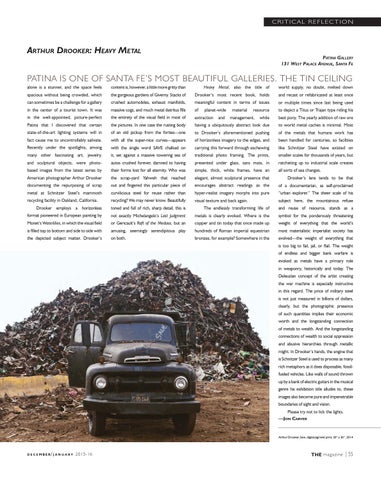 PATINA IS ONE OF SANTA FE’S MOST BEAUTIFUL GALLERIES. THE TIN CEILING alone is a stunner, and the space feels

Heavy Metal, also the title of

world supply, no doubt, melted down

spacious without being crowded, which

the gorgeous gardens of Giverny. Stacks of

and recast or refabricated at least once

can sometimes be a challenge for a gallery

or multiple times since last being used

in the center of a tourist town. It was

to depict a Titus or Trajan type riding his

in the well-appointed, picture-perfect

the entirety of the visual field in most of

Patina that I discovered that certain

the pictures. In one case the rusting body

having a ubiquitously abstract look due

to world metal caches is minimal. Most

state-of-the-art lighting systems will in

of an old pickup from the forties—one

of the metals that humans work has

fact cause me to uncontrollably salivate.

with all the super-nice curves—appears

of horizonless imagery to the edges, and

been handled for centuries, so facilities

Recently under the spotlights, among

with the single word SAVE chalked on

carrying this forward through eschewing

many other fascinating art, jewelry,

it, set against a massive towering sea of

smaller scales for thousands of years, but

and sculptural objects, were photo-

autos crushed forever, damned to having

presented under glass, sans mats, in

ratcheting up to industrial scale creates

based images from the latest series by

their forms lost for all eternity. Who was

simple, thick, white frames, have an

all sorts of sea changes.

the scrap-yard Yahweh that reached

Drooker’s lens tends to be that

documenting the repurposing of scrap

out and fingered this particular piece of

encourages abstract readings as the

of a documentarian, as self-proclaimed

curvilicious steel for reuse rather than

“urban explorer.” The sheer scale of his

recycling? We may never know. Beautifully

visual texture and back again.

toned and full of rich, sharp detail, this is

The endlessly transforming life of

and reuse of resource, stands as a

format pioneered in European painting by

metals is clearly evoked. Where is the

symbol for the ponderously threatening

Monet’s Waterlilies, in which the visual field

or Gericault’s Raft of the Medusa, but an

copper and tin today that once made up

weight of everything that the world’s

is filled top to bottom and side to side with

most materialistic imperialist society has

bronzes, for example? Somewhere in the

evolved—the weight of everything that is too big to fail, jail, or flail. The weight of endless and bigger bank warfare is evoked as metals have a primary role in weaponry, historically and today. The Deleuzian concept of the artist creating the war machine is especially instructive in this regard. The price of military steel is not just measured in billions of dollars, clearly, but the photographic presence of such quantities implies their economic worth and the longstanding connection of metals to wealth. And the longstanding connections of wealth to social oppression and abusive hierarchies through metallic might. In Drooker’s hands, the engine that is Schnitzer Steel is used to process as many rich metaphors as it does disposable, fossilfueled vehicles. Like walls of sound thrown up by a bank of electric guitars in the musical genre his exhibition title alludes to, these images also become pure and impenetrable boundaries of sight and vision. Please try not to lick the lights. —Jon Carver