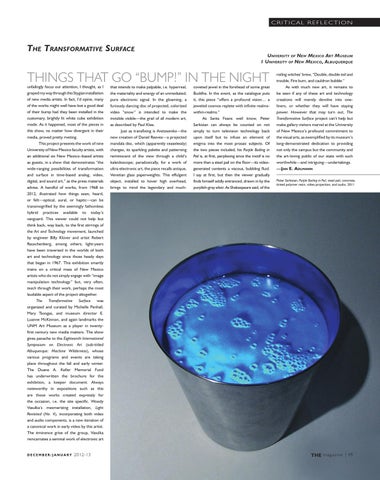 Things that go “bump!” in the night unfailingly focus our attention, I thought, as I groped my way through this Stygian installation of new media artists. In fact, I’d opine, many of the works might well have lost a good deal of their bump had they been installed in the customary, brightly lit white cube exhibition mode. As it happened, most of the pieces in this show, no matter how divergent in their media, proved pretty riveting. This project presents the work of nine University of New Mexico faculty artists, with an additional six New Mexico–based artists as guests, in a show that demonstrates “the wide-ranging possibilities of transformation and surface in time-based analog, video, digital, and sound art,” as the press materials advise. A handful of works, from 1968 to 2012, illustrated how things seen, heard, or felt—optical, aural, or haptic—can be transmogrified by the seemingly fathomless hybrid practices available to today’s vanguard. This viewer could not help but think back, way back, to the first stirrings of the Art and Technology movement, launched by engineer Billy Klüver and artist Robert Rauschenberg, among others; light-years have been traversed in the worlds of both art and technology since those heady days that began in 1967. This exhibition smartly trains on a critical mass of New Mexico artists who do not simply engage with “image manipulation technology” but, very often, teach through their work, perhaps the most laudable aspect of the project altogether. The Transformative Surface was organized and curated by Michelle Penhall, Mary Tsongas, and museum director E. Luanne McKinnon, and again landmarks the UNM Art Museum as a player in twentyfirst century new media matters. The show gives panache to the Eighteenth International Symposium on Electronic Art (sub-titled Albuquerque: Machine Wilderness), whose various programs and events are taking place throughout the fall and early winter. The Duane A. Keller Memorial Fund has underwritten the brochure for the exhibition, a keeper document. Always noteworthy in expositions such as this are those works created expressly for the occasion, i.e. the site specific. Woody Vasulka’s mesmerizing installation, Light Revisited (No. 4), incorporating both video and audio components, is a new iteration of a canonical work in early video by this artist. The éminence grise of the group, Vasulka reincarnates a seminal work of electronic art

that intends to make palpable, i.e. hyperreal, the materiality and energy of an unmediated, pure electronic signal. In the gloaming, a furiously dancing disc of projected, colorized video “snow” is intended to make the invisible visible—the grail of all modern art, as described by Paul Klee. Just as transfixing is Avatasamka—the new creation of Daniel Reeves—a projected mandala disc, which (apparently ceaselessly) changes, its sparkling palette and patterning reminiscent of the view through a child’s kaleidoscope; paradoxically, for a work of ultra-electronic art, the piece recalls antique, Venetian glass paperweights. This effulgent object, installed to hover high overhead, brings to mind the legendary and much-

coveted jewel in the forehead of some great Buddha. In the event, as the catalogue puts it, this piece “offers a profound vision… a jeweled cosmos replete with infinite realmswithin-realms.” As Santa Feans well know, Peter Sarkisian can always be counted on not simply to turn television technology back upon itself but to infuse an element of enigma into the most prosaic subjects. Of the two pieces included, his Purple Boiling in Pail is, at first, perplexing since the motif is no more than a steel pail on the floor—its videogenerated contents a viscous, bubbling fluid. I say at first, but then the viewer gradually finds himself oddly entranced, drawn in by the purplish-gray elixir. As Shakespeare said, of the

roiling witches’ brew, “Double, double toil and trouble, Fire burn, and cauldron bubble.” As with much new art, it remains to be seen if any of these art and technology creations will merely devolve into oneliners, or whether they will have staying power. However that may turn out, The Transformative Surface project can’t help but make gallery visitors marvel at the University of New Mexico’s profound commitment to the visual arts, as exemplified by its museum’s long-demonstrated dedication to providing not only the campus but the community and the art-loving public of our state with such worthwhile—and intriguing—undertakings. —Jan E. Adlmann Peter Sarkisian, Purple Boiling in Pail, steel pail, concrete, tinted polymer resin, video projection, and audio, 2011