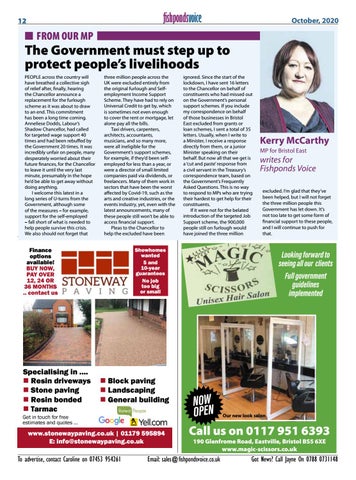 n FROM OUR MP

The Government must step up to protect people’s livelihoods PEOPLE across the country will have breathed a collective sigh of relief after, finally, hearing the Chancellor announce a replacement for the furlough scheme as it was about to draw to an end. This commitment has been a long time coming. Anneliese Dodds, Labour’s Shadow Chancellor, had called for targeted wage support 40 times and had been rebuffed by the Government 20 times. It was incredibly unfair on people, many desperately worried about their future finances, for the Chancellor to leave it until the very last minute, presumably in the hope he’d be able to get away without doing anything. I welcome this latest in a long series of U-turns from the Government, although some of the measures – for example, support for the self-employed – fall short of what is needed to help people survive this crisis. We also should not forget that

three million people across the UK were excluded entirely from the original furlough and Selfemployment Income Support Scheme. They have had to rely on Universal Credit to get by, which is sometimes not even enough to cover the rent or mortgage, let alone pay all the bills. Taxi drivers, carpenters, architects, accountants, musicians, and so many more, were all ineligible for the Government’s support schemes, for example, if they’d been selfemployed for less than a year, or were a director of small limited companies paid via dividends, or freelancers. Many of them work in sectors that have been the worst affected by Covid-19, such as the arts and creative industries, or the events industry, yet, even with the latest announcements, many of these people still won’t be able to access financial support. Pleas to the Chancellor to help the excluded have been

ignored. Since the start of the lockdown, I have sent 16 letters to the Chancellor on behalf of constituents who had missed out on the Government’s personal support schemes. If you include my correspondence on behalf of those businesses in Bristol East excluded from grants or loan schemes, I sent a total of 35 letters. Usually, when I write to a Minister, I receive a response directly from them, or a junior Minister speaking on their behalf. But now all that we get is a ‘cut and paste’ response from a civil servant in the Treasury’s correspondence team, based on the Government’s Frequently Asked Questions. This is no way to respond to MPs who are trying their hardest to get help for their constituents. If it were not for the belated introduction of the targeted Job Support scheme, the 900,000 people still on furlough would have joined the three million

writes for Fishponds Voice excluded. I’m glad that they’ve been helped, but I will not forget the three million people this Government has let down. It’s not too late to get some form of financial support to these people, and I will continue to push for that.

Get in touch for free estimates and quotes ...

Local newspaper packed with news, views and advertising for the residents and businesses of the Greater Fishponds area. This month, a road described as a rat run by residents could close to through traffic, a confirmed case of COVID-19 at a secondary school, and families are asked what new play equipment they would like to see in Eastville Park