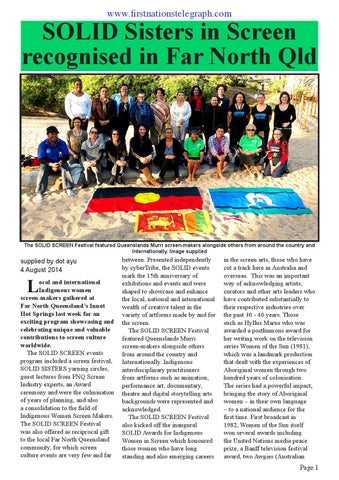 The SOLID SCREEN Festival featured Queenslands Murri screen-makers alongside others from around the country and Internationally. Image supplied

between. Presented independently by cyberTribe, the SOLID events mark the 15th anniversary of exhibitions and events and were shaped to showcase and enhance the local, national and international wealth of creative talent in the variety of artforms made by and for the screen. The SOLID SCREEN Festival featured Queenslands Murri screen-makers alongside others from around the country and Internationally. Indigenous interdisciplinary practitioners from artforms such as animation, performance art, documentary, theatre and digital storytelling arts backgrounds were represented and acknowledged. The SOLID SCREEN Festival also kicked off the inaugural SOLID Awards for Indigenous Women in Screen which honoured those women who have long standing and also emerging careers

in the screen arts, those who have cut a track here in Australia and overseas. This was an important way of acknowledging artists, curators and other arts leaders who have contributed substantially to their respective industries over the past 30 - 40 years. Those such as Hyllus Marus who was awarded a posthumous award for her writing work on the television series Women of the Sun (1981), which was a landmark production that dealt with the experiences of Aboriginal women through two hundred years of colonisation. The series had a powerful impact, bringing the story of Aboriginal women – in their own language – to a national audience for the first time. First broadcast in 1982, Women of the Sun itself won several awards including the United Nations media peace prize, a Banff television festival award, two Awgies (Australian

SOLID Screen Artist was awarded to r e a who was born in Coonabarabran, New South Wales, into the Gamilaraay/ Wailwan people and currently lives in Sydney.

Writers’ Guild) and five Penguin (Television Society of Australia) awards. Published as a script (1983) and novel (1985), it also featured widely in school curricula. Hyllus writing was integral to the series and she was one of very few Aboriginal voices in the industry at that time. The other award winners were Destiny Deacon for her decades of SOLID Contribution to Photo Media, SOLID Screen Storyteller Awards went to Darlene Johnson (AUS) and Michelle Derosier (CANADA) for their work in Documentary and Narrtive forms, The SOLID Screen Artist award went to Koori New Media artist r e a for her decades the field, The SOLID Screen Festival Director award went to Janina Harding for her work on one of Australias very few Indigenous Screen Festivals - Blak Nite Screen, which includes film alongside video artforms, The SOLID Arts Leadership awards went to Native Canadian performance artist and Tribe curator Lori Blondeau and Denise Bolduc (CANADA), The SOLID Contribution to Screen Arts awards went to Ariel Smith (CANADA), for her work with NIMAC, the National Indigenous

SOLID Screen Storytellers Michelle Derosier is an awardwinning filmmaker who brings her twelve years of experience as a front line social worker to film work.

Media Arts Coalition in Canada and also Maori Screen maker Hiona Henare, for her work in Indigenous festivals, organisation and events in New Zealand, and the SOLID Screen Curator award to Christine Peacock, for her work on the Colourise, the only Indigenous Film and Media Arts festival in Queensland. The SOLID SISTERS program focused on the professional development and cultural safety of women, and it was appropriate that it was held in July, to mark NAIDOC week and also celebrate the Seven Sisters Dreaming, the star formation that is in the sky at this time of the year. The Seven Sisters is a popular Aboriginal Dreaming story based on a constellation known to other cultures as well, like Matariki for Maori, Subaru in Japan, Pleiades to the Greeks and Madoo’asinug is the constellation of the seven sweating stones or “seven sisters” for Anishnawbe. This story reminds us that having a group of women who support and encourage, can help to persevere during times of stress. The gathering allowed the field of women to thank goodness for the sisterhood. SOLID Screen also included

a range of work from those screen queens participating in the forum event that reflect upon the discussions and dialogue that the Solid Ideas forum fleshed out. The screening, like the forum, responded to important transformations that have reconfigured opportunities for experimental arts, remix and media practice, internationally, in recent times. Within the programs streams of activity, we aim to deliver Indigenous specific screen components to allow opportunities for Indigenous screen artists and artsworkers to develop professionally, develop greater understanding of new media and inter-disciplinary practices, and gain critical feedback on personal projects. SOLID SCREEN Festival director Jenny Fraser says the Far North Queensland region has a prolific visual arts industry and great depth of Indigenous arts practice, and sees the SOLID events as a great opportunity for Indigenous practitioners to explore and nurture other mediums of expression. She says the event has also highlighted some pertinent issues for women screen-makers; “There are also a number of number

SOLID Contribution to Screen Arts awarded to Hiona Henare who has produced many high proﬁle events, television and recently ﬁlm.

of Murri screen-makers already with long histories of working in a variety of roles contributing to screen mediums, who have to date gone unacknowledged in our home state of Queensland”. “There are very few Indigenous Screen Festivals in Australia and Internationally, but we aspire to continue the legacies of colourise festival based out of Brisbane, Wairoa Maori Film Festival in New Zealand and the imagineNATIVE Film and Media Arts Festival in Canada” said Jenny Fraser. Those screening works on the Festival night included Queensland Visual artist Fiona Foley who showed her new short experimental screen work vexed, that was shot in a dry creek bed on location near Alice Springs in the Northern Territory. Theatre-maker Lily Shearer, photographer Michelle Blakeney, and new media artist r e a, from New South Wales also showed new short works. International screening guests, Michelle Derosier, Lori Blondeau and Ariel Smith from Canada and

Ariel Smith is a filmmaker, video artist and cultural worker currently based in Ottawa, Ontario Canada. She was awarded SOLID Contribution to Screen Arts.

Hiona Henare from New Zealand also spoke about their works on the night. Far North Queensland-based SOLID SCREEN Festival director Jenny Fraser offered a Queensland premiere of a new short documentary titled Madeline Hodge. Presented in the style of digital storytelling, it is the first in the new Good Medicine series about the healing arts. Senior visual artist Madeline Hodge was also in attendance from the Gold Coast to speak about the doco and her artwork. Along with Murri practitioners attending, other special guests included theatre-maker Lily Shearer, new media artists r e a, and Michelle Blakeney travelled from New South Wales, and writer Charmaine Green and artsworker Tracey Green, made the long journey from Geraldton in Western Australia. International screening guests include Michelle Derosier, Lori Blondeau and Ariel Smith from Canada and Hiona Henare from New Zealand.

The SOLID program began at Holloways Beach before travelling to Innot Hot Springs for the SOLID Screen Festival held on the 20th July 2014 which screened works by women artists, and was open for the public, welcoming men, women and children, gaining some insider perspectives, through the eyes of women screen artists from around the world. In a partnership with the Centre for Creative Arts at LaTrobe University in Melbourne, Native Canadian performance artist Lori Blondeau also presented a public lecture titled ‘Unpacking the Indigenous Female Body’ at the Australian Centre for the Moving Image at Federation Square on Tuesday 29th July 2014. Lori discussed the body of performance work she has created over the past 20 years. In her visual art and performances, Blondeau explores the influence of popular media and culture on indigenous self-identity, self-image, and selfdefinition.