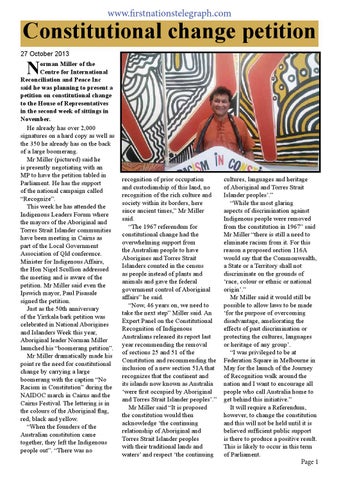 orman Miller of the Centre for International Reconciliation and Peace Inc said he was planning to present a petition on constitutional change to the House of Representatives in the second week of sittings in November. He already has over 2,000 signatures on a hard copy as well as the 350 he already has on the back of a large boomerang. Mr Miller (pictured) said he is presently negotiating with an MP to have the petition tabled in Parliament. He has the support of the national campaign called “Recognize”. This week he has attended the Indigenous Leaders Forum where the mayors of the Aboriginal and Torres Strait Islander communities have been meeting in Cairns as part of the Local Government Association of Qld conference. Minister for Indigenous Affairs, the Hon Nigel Scullion addressed the meeting and is aware of the petition. Mr Miller said even the Ipswich mayor, Paul Pisasale signed the petition. Just as the 50th anniversary of the Yirrkala bark petition was celebrated in National Aborigines and Islanders Week this year, Aboriginal leader Norman Miller launched his “boomerang petition”. Mr Miller dramatically made his point re the need for constitutional change by carrying a large boomerang with the caption “No Racism in Constitution” during the NAIDOC march in Cairns and the Cairns Festival. The lettering is in the colours of the Aboriginal flag, red, black and yellow. “When the founders of the Australian constitution came together, they left the Indigenous people out”. “There was no

recognition of prior occupation and custodianship of this land, no recognition of the rich culture and society within its borders, here since ancient times,” Mr Miller said. “The 1967 referendum for constitutional change had the overwhelming support from the Australian people to have Aborigines and Torres Strait Islanders counted in the census as people instead of plants and animals and gave the federal government control of Aboriginal affairs” he said. “Now, 46 years on, we need to take the next step” Miller said. An Expert Panel on the Constitutional Recognition of Indigenous Australians released its report last year recommending the removal of sections 25 and 51 of the Constitution and recommending the inclusion of a new section 51A that recognizes that the continent and its islands now known as Australia ‘were first occupied by Aboriginal and Torres Strait Islander peoples’.” Mr Miller said “It is proposed the constitution would then acknowledge ‘the continuing relationship of Aboriginal and Torres Strait Islander peoples with their traditional lands and waters’ and respect ‘the continuing

cultures, languages and heritage of Aboriginal and Torres Strait Islander peoples’.” “While the most glaring aspects of discrimination against Indigenous people were removed from the constitution in 1967” said Mr Miller “there is still a need to eliminate racism from it. For this reason a proposed section 116A would say that the Commonwealth, a State or a Territory shall not discriminate on the grounds of ‘race, colour or ethnic or national origin’.” Mr Miller said it would still be possible to allow laws to be made ‘for the purpose of overcoming disadvantage, ameliorating the effects of past discrimination or protecting the cultures, languages or heritage of any group’. “I was privileged to be at Federation Square in Melbourne in May for the launch of the Journey of Recognition walk around the nation and I want to encourage all people who call Australia home to get behind this initiative.” It will require a Referendum, however, to change the constitution and this will not be held until it is believed sufficient public support is there to produce a positive result. This is likely to occur in this term of Parliament. Page 1

Norman Miller of the Centre for International Reconciliation and Peace Inc said he was planning to present a petition on constitutional chan...

Norman Miller of the Centre for International Reconciliation and Peace Inc said he was planning to present a petition on constitutional chan...