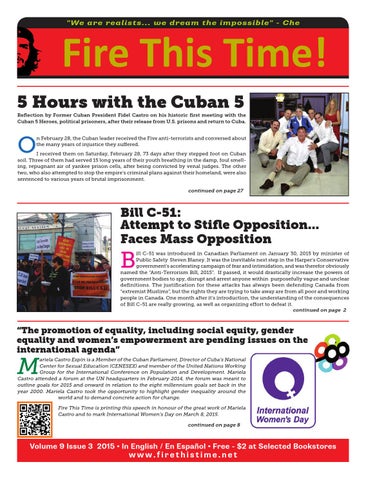 &quot;We are realists... we dream the impossible&quot; - Che

Fire This Time! 5 Hours with the Cuban 5 Reflection by Former Cuban President Fidel Castro on his historic first meeting with the Cuban 5 Heroes, political prisoners, after their release from U.S. prisons and return to Cuba.

n February 28, the Cuban leader received the Five anti-terrorists and conversed about the many years of injustice they suffered.

I received them on Saturday, February 28, 73 days after they stepped foot on Cuban soil. Three of them had served 15 long years of their youth breathing in the damp, foul smelling, repugnant air of yankee prison cells, after being convicted by venal judges. The other two, who also attempted to stop the empire’s criminal plans against their homeland, were also sentenced to various years of brutal imprisonment. continued on page 27

ill C-51 was introduced in Canadian Parliament on January 30, 2015 by minister of Public Safety Steven Blaney. It was the inevitable next step in the Harper&#39;s Conservative government&#39;s accelerating campaign of fear and intimidation, and was therefor obviously named the “Anti-Terrorism Bill, 2015”. If passed, it would drastically increase the powers of government bodies to spy, disrupt and arrest anyone within purposefully vague and unclear definitions. The justification for these attacks has always been defending Canada from “extremist Muslims”, but the rights they are trying to take away are from all poor and working people in Canada. One month after it&#39;s introduction, the understanding of the consequences of Bill C-51 are really growing, as well as organizing effort to defeat it. continued on page 2

“The promotion of equality, including social equity, gender equality and women’s empowerment are pending issues on the international agenda”

ariela Castro Espin is a Member of the Cuban Parliament, Director of Cuba’s National Center for Sexual Education (CENESEX) and member of the United Nations Working Group for the International Conference on Population and Development. Mariela Castro attended a forum at the UN headquarters in February 2014, the forum was meant to outline goals for 2015 and onward in relation to the eight millennium goals set back in the year 2000. Mariela Castro took the opportunity to highlight gender inequality around the world and to demand concrete action for change. Fire This Time is printing this speech in honour of the great work of Mariela Castro and to mark International Women’s Day on March 8, 2015. continued on page 8 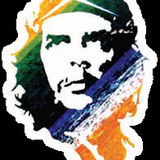