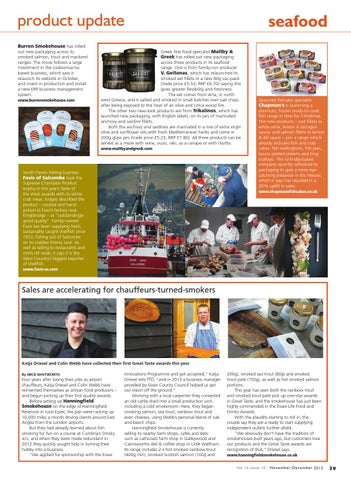 product update Burren Smokehouse has rolled out new packaging across its smoked salmon, trout and mackerel ranges. The move follows a large investment in the Lisdoonvarnabased business, which saw it relaunch its website in October, and invest in production and install a new ERP business management system. www.burrensmokehouse.com

Greek ﬁne food specialist Maltby &amp; Greek has rolled out new packaging across three products in its seafood range. One is from family-run producer V. Geitonas, which has relaunched its smoked eel ﬁllets in a new 80g vac-pack (trade price £5.53, RRP £6.70) saying this gives greater ﬂexibility and freshness. The eel comes from Arta, in north west Greece, and is salted and smoked in small batches over oak chips, after being exposed to the heat of an olive and citrus wood ﬁre. The other two new-look products are from Trikalinos, which has launched new packaging, with English labels, on its jars of marinated anchovy and sardine ﬁllets. Both the anchovy and sardines are marinated in a mix of extra virgin olive and sunﬂower oils with fresh Mediterranean herbs and come in 200g glass jars (trade price £5.23, RRP £7.80). All three products can be served as a meze with wine, ouzo, raki, as a canape or with risotto. www.maltbyandgreek.com

South Devon ﬁshing business Favis of Salcombe took the Supreme Champion Product trophy in this year’s Taste of the West awards with its white crab meat. Judges described the product – cooked and handpicked at Favis’s factory near Kingsbridge – as “outstandingly good quality”. Family-owned Favis has been supplying fresh, sustainably caught shellﬁsh since 1972, ﬁshing out of Salcombe on its crabber Emma Jane. As well as selling to restaurants and chefs UK-wide, it says it is the West Country’s biggest exporter of shellﬁsh.

Gourmet ﬁshcake specialist Chapman’s is launching a premium, frozen ready-to-cook ﬁsh range in time for Christmas. The new products – cod ﬁllets in white wine, lemon &amp; tarragon sauce, and salmon ﬁllets in lemon &amp; dill sauce – join a range which already includes ﬁsh and crab cakes, ﬁsh wellingtons, ﬁsh pies, luxury peeled prawns and king scallops. The Grimsby-based company recently refreshed its packaging to give a more eyecatching presence in the freezer, which it says has resulted in a 20% uplift in sales. www.chapmansﬁshcakes.co.uk

Sales are accelerating for chauffeurs-turned-smokers

Four years after losing their jobs as airport chauffeurs, Katja Driesel and Colin Webb have reinvented themselves as artisan food producers – and begun picking up their ﬁrst quality awards. Before setting up Hanningﬁeld Smokehouse on the edge of Hanningﬁeld Reservoir in rural Essex, the pair were racking up 10,000 miles a month driving clients around East Anglia from the London airports. But they had already learned about ﬁsh smoking for fun on a course at Cumbria’s Smoky Jo’s, and when they were made redundant in 2012 they quickly sought help in turning their hobby into a business. “We applied for sponsorship with the Essex

Innovations Programme and got accepted,” Katja Driesel tells FFD, “and in 2013 a business manager provided by Essex County Council helped us get our vision off the ground.” Working with a local carpenter they converted an old cattle shed into a small production unit, including a cold smokeroom. Here, they began smoking salmon, sea trout, rainbow trout and even cheeses, using Webb’s personal blend of oak and beech chips. Hanningﬁeld Smokehouse is currently selling to nearby farm shops, cafés and delis such as Lathcoats farm shop in Galleywood and Cairnsworths deli &amp; coffee shop in Little Waltham. Its range includes 2 x hot smoked rainbow trout (400g min), smoked Scottish salmon (100g and

200g), smoked sea trout (80g) and smoked trout paté (150g), as well as hot smoked salmon portions. This year has seen both the rainbow trout and smoked trout paté pick up one-star awards in Great Taste, and the smokehouse has just been highly commended in the Essex Life Food and Drinks Awards. With the plaudits starting to roll in, the couple say they are a ready to start supplying independent outlets further aﬁeld. “We obviously don’t have the tradition of smokehouses built years ago, but customers love our products and the Great Taste awards are recognition of that,” Driesel says. www.hanningﬁeldsmokehouse.co.uk