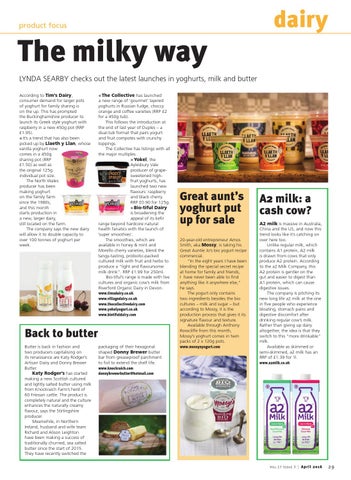 The milky way LYNDA SEARBY checks out the latest launches in yoghurts, milk and butter According to Tim’s Dairy, consumer demand for larger pots of yoghurt for family sharing is on the up. This has prompted the Buckinghamshire producer to launch its Greek style yoghurt with raspberry in a new 450g pot (RRP £1.95). l It’s a trend that has also been picked up by Llaeth y Llan, whose vanilla yoghurt now comes in a 450g sharing pot (RRP £1.50) as well as the original 125g individual pot size. The North Wales producer has been making yoghurt on the family farm since the 1980s, and this month starts production in a new, larger dairy, still located on the farm. The company says the new dairy will allow it to double capacity to over 100 tonnes of yoghurt per week.

Collective has launched a new range of ‘gourmet’ layered yoghurts in Russian fudge, choccy orange and coffee varieties (RRP £2 for a 450g tub). This follows the introduction at the end of last year of Duples – a dual-tub format that pairs yogurt and fruit compotes with crunchy toppings. The Collective has listings with all the major multiples. l Yokel, the Aylesbury Vale producer of grapesweetened highfruit yoghurts, has launched two new flavours: raspberry and black cherry. RRP £0.90 for 125g. l Bio-tiful Dairy is broadening the appeal of its kefir range beyond hardcore natural health fanatics with the launch of ‘super smoothies’. The smoothies, which are available in honey &amp; mint and Morello cherry varieties, blend the tangy-tasting, probiotic-packed cultured milk with fruit and herbs to produce a “light and flavoursome milk drink”. RRP £1.99 for 250ml. Bio-tiful’s range is made with live cultures and organic cow’s milk from Riverford Organic Dairy in Devon. www.timsdairy.co.uk www.villagedairy.co.uk www.thecollectivedairy.com www.yokelyogurt.co.uk www.biotifuldairy.com

Back to butter Butter is back in fashion and two producers capitalising on its renaissance are Katy Rodger’s Artisan Dairy and Donny Brewer Butter. Katy Rodger’s has started making a new Scottish cultured and lightly salted butter using milk from Knockraich Farm’s herd of 60 Friesian cattle. The product is completely natural and the culture enhances the naturally creamy flavour, says the Stirlingshire producer. Meanwhile, in Northern Ireland, husband and wife team Richard and Alison Leighton have been making a success of traditionally churned, sea salted butter since the start of 2015. They have recently switched the

packaging of their hexagonal shaped Donny Brewer butter bar from greaseproof parchment to foil to extend the shelf life.

Great aunt’s yoghurt put up for sale 20-year-old entrepreneur Amos Smith, aka Mossy, is taking his Great Auntie Jo’s bio yogurt recipe commercial. “In the eight years I have been blending the special secret recipe at home for family and friends, I have never been able to find anything like it anywhere else,” he says. The yogurt only contains two ingredients besides the bio cultures – milk and sugar – but according to Mossy, it is the production process that gives it its signature flavour and texture. Available through Anthony Rowcliffe from this month, Mossy’s yoghurt comes in twin packs of 2 x 120g pots. www.mossysyogurt.com

A2 milk: a cash cow? A2 milk is massive in Australia, China and the US, and now this trend looks like it’s catching on over here too. Unlike regular milk, which contains A1 protein, A2 milk is drawn from cows that only produce A2 protein. According to the a2 Milk Company, this A2 protein is gentler on the gut and easier to digest than A1 protein, which can cause digestive issues. The company is pitching its new long life a2 milk at the one in five people who experience bloating, stomach pains and digestive discomfort after drinking regular cow’s milk. Rather than giving up dairy altogether, the idea is that they switch to this “more drinkable” milk. Available as skimmed or semi-skimmed, a2 milk has an RRP of £1.39 for 1l. www.a2milk.co.uk