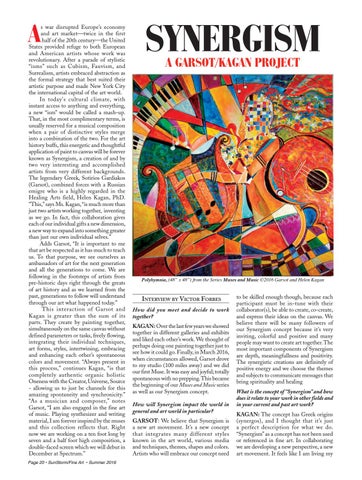 s war disrupted Europe’s economy and art market—twice in the first half of the 20th century—the United States provided refuge to both European and American artists whose work was revolutionary. After a parade of stylistic “isms” such as Cubism, Fauvism, and Surrealism, artists embraced abstraction as the formal strategy that best suited their artistic purpose and made New York City the international capital of the art world. In today&#39;s cultural climate, with instant access to anything and everything, a new “ism” would be called a mash-up. That, in the most complimentary terms, is usually reserved for a musical composition when a pair of distinctive styles merge into a combination of the two. For the art history buffs, this energetic and thoughtful application of paint to canvas will be forever known as Synergism, a creation of and by two very interesting and accomplished artists from very different backgrounds. The legendary Greek, Sotirios Gardiakos (Garsot), combined forces with a Russian emigre who is a highly regarded in the Healing Arts field, Helen Kagan, PhD. &quot;This,” says Ms. Kagan, “is much more than just two artists working together, inventing as we go. In fact, this collaboration gives each of our individual gifts a new dimension, a new way to expand into something greater than just our own individual selves.” Adds Garsot, “It is important to me that art be respected as it has much to teach us. To that purpose, we see ourselves as ambassadors of art for the next generation and all the generations to come. We are following in the footsteps of artists from pre-historic days right through the greats of art history and as we learned from the past, generations to follow will understand through our art what happened today.” This interaction of Garsot and Kagan is greater than the sum of its parts. They create by painting together, simultaneously on the same canvas without defined parameters or tasks, freely flowing, integrating their individual techniques, art forms, styles, intertwining, embracing and enhancing each other’s spontaneous colors and movement. “Always present in this process,” continues Kagan, “is that completely authentic organic holistic Oneness with the Creator, Universe, Source - allowing us to just be channels for this amazing spontaneity and synchronicity.” “As a musician and composer,” notes Garsot, “I am also engaged in the fine art of music. Playing synthesizer and writing material, I am forever inspired by the muses and this collection reflects that. Right now we are working on a ten foot long by seven and a half foot high composition, a double-faced screen which we will debut in December at Spectrum.” Page 20 • SunStorm/Fine Art • Summer 2016

Interview by Victor Forbes How did you meet and decide to work together? KAGAN: Over the last few years we showed together in different galleries and exhibits and liked each other’s work. We thought of perhaps doing one painting together just to see how it could go. Finally, in March 2016, when circumstances allowed, Garsot drove to my studio (100 miles away) and we did our first Muse. It was easy and joyful; totally spontaneous with no prepping. This became the beginning of our Muses and Music series as well as our Synergism concept. How will Synergism impact the world in general and art world in particular? GARSOT: We believe that Synergism is a new art movement. It’s a new concept that integrates many different styles known in the art world, various media and techniques, themes, shapes and colors. Artists who will embrace our concept need

to be skilled enough though, because each participant must be in-tune with their collaborator(s), be able to create, co-create, and express their ideas on the canvas. We believe there will be many followers of our Synergism concept because it’s very inviting, colorful and positive and many people may want to create art together. The most important components of Synergism are depth, meaningfullness and positivity. The synergistic creations are definitely of positive energy and we choose the themes and subjects to communicate messages that bring spirituality and healing What is the concept of “Synergism” and how does it relate to your work in other fields and in your current and past art work? KAGAN: The concept has Greek origins (synergos), and I thought that it’s just a perfect description for what we do. “Synergism” as a concept has not been used or referenced in fine art. In collaborating we are developing a new perspective, a new art movement. It feels like I am living my 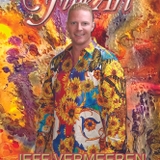