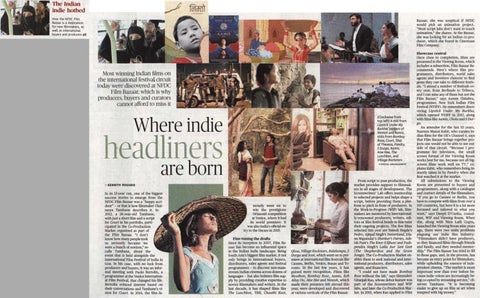 Khan, Made In Bangladesh by Rubaiyat Hossain, Mayar Jonjal (Debris Of Desire) by Indranil Roychowdhury, Nonajoler Kabbo (The Salt In Our Waters) by Rezwan Shahriar Sumit, Dahokaal (Burning Time) by Dhrubo Hasan, Manusher Bagaan (People Of The Garden) by Nurul Alam Atique, No Dorai (Dare To Surf) by Taneem Rahman, Rickshaw Girl by Amitabh Reza Chowdhury and Shongram by Munsur Ali.

Hasina: A Daughter&#39;s Tale by Piplu Khan, Made In Bangladesh by Rubaiyat Hossain, Mayar Jonjal (Debris Of Desire) by Indranil Roychowdhury and Nonajoler Kabbo (The Salt In Our Waters) by Rezwan Shahriar Sumit were selected in the Film Bazaar Recommends (FBR) list, a specially curated list of 25 film projects among the 219 films selected in the Viewing Room 2019 segment. The film-makers selected in the segment&#39;s FBR list pitched their films to potential international investors, producers, sales agents, distributors, and festival programmers in an open pitching session at the four-day-long event held at the Goa Marriott Resort &amp; Spa.

Eka (Solo) by Suman Sen and Sand City by Mahde Hasan have been selected in the Co-Production Market 2019 segment of the event. These film-makers will be pitching their projects to a curated audience of Indian and international producers, distributors, festival programmers, financiers and sales agents. Sand City is directed by renowned Bangladeshi film-maker Mahde Hasan and his producers are Rubaiyat Hossain (Khona Talkies), Aadnan Imtiaz Ahmed (Cinema Cocoon), and Francois D’artemare (Les Films de l’Apres-Midi). Mahde told the Dhaka Tribune’s Showtime: &quot;We have already done one on one meetings with the sales agents from the Netherlands, France, North America, Hong Kong and China, and had meetings with producers from Canada and India. “Let&#39;s see what happens. Hopefully we will start to submit our film projects for more production grants from next year onwards,&quot; he added.

Sand City was part of co-productions platforms like Open Doors Locarno 2018, Products Au Sud 2018, and La Fabrique Les Cinémas Du Monde 2019 at Cannes. Indian film-maker Suman Sen’s Eka is a co-production between Bangladesh, France, and India. The film’s lead producers will be renowned Bangladeshi film-makers Bijon Imtiaz and Arifur Rahman, and their production company Goopy Bagha Productions Limited. Bijon told the Dhaka Tribune’s Showtime: “Suman is a promising Indian film-maker and I am cowriting the film’s screenplay with him. Based in Kolkata,the film revolves around a former leftist leader who is struggling in his career with all the corruption around him. The storyline explains how the protagonist’s whole world is falling apart, his financial struggles, and how his wife is about to leave him. “We are very close to the final draft of the script and here [Goa] to raise more funding for the project. The whole film will be shot in Kolkata and we will start the first phase of the production very soon. We are really enjoying the whole vibe here this year with all the fellow Bangladeshi film-makers.” Mayar Jonjal (Debris Of Desire) directed by Indranil Roychowdhury is being produced by Bangladeshi producer Josim Ahmed. He told Dhaka Tribune&#39;s Showtime: &quot;The film is a Bangladesh (Views), India (Flipbook) co-production and will feature Bangladeshi actor Aupee Karim and West Bengal actor Ritwick Chakraborty in the lead roles.&quot; &quot;The project was also the first approved India, Bangladesh co-production after the new regulation came into effect,&quot; Josim added. The hyped and soon to release film No Dorai (Dare to Surf) was featured in this year’s Viewing Room 2019 list at Film Bazaar. The film’s director Taneem Rahman told the Dhaka Tribune’s Showtime: “Back in 2017, we went to Film Bazaar for financing No Dorai as we were selected for the CoProduction Market segment that year. This year the film made it to their Viewing Room 2019. “I couldn&#39;t manage to go this year because currently I&#39;m very busy with the upcoming local release. So my producer went there to attend the events and meetings,” he added. Star Cineplex Chairman Mahboob Rahman is the producer of No Dorai , the first surfing film of the country. It is scheduled to release in local theatres on November 29. Home

Connect With Us 

buying and selling film content over the years, has opened here on the sidelines of the golden jubilee edition of the International Film Festival of India. Information and Broadcasting Minister Prakash Javadekar on Wednesday inaugurated the film market which is being organised by the National Film Development Corporation.

The minister, in his remarks at the event, spoke about

Preparation in full swing for International Film Festival of India

Rajinikanth to be honoured at IFFI, French actor Isabelle Huppert to get Lifetime Achievement Award

how Indian films are being accepted globally.

ideas and take them to the world, he said. &#39;Film Bazaar&#39; is held every year at the Marriott Resort in Goa between November 20 and 24. The Film Bazaar encourages creative and financial collaboration between the South Asian and International film communities, an official statement said. Over the years, films such as Lunch Box, Margarita With A Straw, Chauthi Koot, Qissa, Ship of Theseus, Titli, Court, Anhe Ghode Da Daan, Miss Lovely, Dum Lagake Haisha, Liar&#39;s Dice and Thithi have been through one or more programmes of the Bazaar, it said.

Superstars Amitabh Bachchan and Rajinikanth came together for the opening of the golden jubilee edition of the IFFI here at a ceremony steeped in glamour, nostalgia and entertainment. (This story has not been edited by Business Standard staff and is auto-generated from a syndicated feed.) First Published: Thu, November 21 2019. 15:45 IST READ MORE ON

A still from 1956, Central Travancore.

The global spotlight will shine once again on city-based filmmaker Don Palathara and his latest film 1956, Central Travancore. It has become one of the two Malayalam films to earn a place in the &#39;Film Bazaar Recommends&#39; section held along side the 50th International Film Festival of India in Goa later this month. The 94-minute-long black and white film, written, directed and edited by Mr. Palathara, and involving a small crew of 25 persons, is one among 26 feature films recommended for screening at Film Bazaar. The film, recommended from out of 200 submissions, will be shown to international film festival programmers and world sales agents – a viewing that Mr. Palathara hopes will take the film to other festivals and pave the way for collaboration with international producers, cast and crew members. While the filmmaker’s earlier works, Shavam and Vith, were acclaimed but not released commercially, Mr. Palathara will submit 1956, Central Travancore for the Censor Board’s certification and release it in theatres. Mr. Palathara, known to work with shoestring budgets and new actors, shot most of the period film in Idukki earlier this year over 16 days. But the film deviates from his earlier works since parts of it were shot on set and this was the first time that Mr. Palathara worked with a producer, Abhilash S. Kumar. It is set in the period that preceded the land reform bills, against the backdrop of migrations to Idukki’s forested land from parts of Central Travancore. Mr. Palathara calls it an “anthropological film” that documents the trials of migration, and the relationship between two brothers, who along with four others, set off on a hunting trip. The filmmaker, who is from Idukki, drew from stories that his grandparents told him of life in the 1950s. Why you should pay for quality journalism - Click to know more

TRENDING ON OUR GROUP SITES

Got a News Tip?

Incentive schemes for international co-productions shooting in India will soon be operational, Variety has exclusively learned.The schemes that were teased during the 2018 edition of Film Bazaar are now ready and an o icial announcement from the Government of India is expected in early 2020. India’s ministry of commerce and industry has chosen the audiovisual industry as one of its champion service sectors and has zeroed in on the establishment of several initiatives. First up, the language used in the co-production treaties India has with various countries will be re-examined and simpli ied. Next, as India currently does not have a public fund that partner countries can access, a fund that can be accessed under the terms of the existing treaties will be announced.India currently has treaties with Bangladesh, Brazil, Canada, China, France, Germany, Italy, Israel, Korea, New Zealand, Poland, Spain and the U.K. Incentivising international productions to come to India, projects will be supported to up to 30% of their in country spend, with a cap on the maximum amount disbursed. India is severely under-supplied with cinema screens, with operational cinema screens now having shrunk to less than 9,000. The ministry will set up a cinema building fund to redress this issue. The budget for these initiatives is likely to be INR 5 billion ($70 million) initially, spread over 24 to 30 months from introduction. India is also setting up a media and entertainment economic summit. “The Prime Minister spoke about this, work has already begun,” Kulmeet Makkar, CEO of the Producers Guild of India, told Variety. “We are very keen to create an economic summit, like Davos, only speci ically focusing on media and entertainment, to take place every year in Mumbai. We’ll get a lot of people from around the world to come to India for the summit.” The initiative will extend beyond ilm and cover technology, innovation and content across platforms. The government will facilitate collaborations and partnerships. The Film Bazaar is an annual industry conclave and content market in Goa organised by India’s National Film Development Corporation.

HAVE A TIP? LET US KNOW