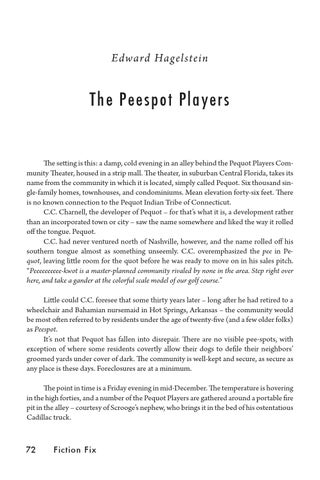 The setting is this: a damp, cold evening in an alley behind the Pequot Players Community Theater, housed in a strip mall. The theater, in suburban Central Florida, takes its name from the community in which it is located, simply called Pequot. Six thousand single-family homes, townhouses, and condominiums. Mean elevation forty-six feet. There is no known connection to the Pequot Indian Tribe of Connecticut. C.C. Charnell, the developer of Pequot – for that’s what it is, a development rather than an incorporated town or city – saw the name somewhere and liked the way it rolled off the tongue. Pequot. C.C. had never ventured north of Nashville, however, and the name rolled off his southern tongue almost as something unseemly. C.C. overemphasized the pee in Pequot, leaving little room for the quot before he was ready to move on in his sales pitch. “Peeeeeeeeee-kwot is a master-planned community rivaled by none in the area. Step right over here, and take a gander at the colorful scale model of our golf course.” Little could C.C. foresee that some thirty years later – long after he had retired to a wheelchair and Bahamian nursemaid in Hot Springs, Arkansas – the community would be most often referred to by residents under the age of twenty-five (and a few older folks) as Peespot. It’s not that Pequot has fallen into disrepair. There are no visible pee-spots, with exception of where some residents covertly allow their dogs to defile their neighbors’ groomed yards under cover of dark. The community is well-kept and secure, as secure as any place is these days. Foreclosures are at a minimum. The point in time is a Friday evening in mid-December. The temperature is hovering in the high forties, and a number of the Pequot Players are gathered around a portable fire pit in the alley – courtesy of Scrooge’s nephew, who brings it in the bed of his ostentatious Cadillac truck. 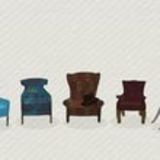