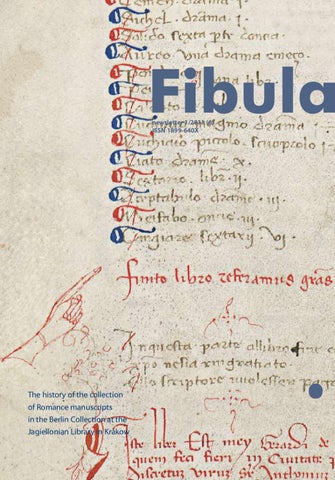 Watermarks in Romance-language manuscripts from the Berlin Collection at the Jagiellonian Library in Cracow – Part 4 Watermarks that we reproduce on the following pages come from Ro­mancelanguage manuscripts from the Berlin collection presently held at the Jagiellonian Library in Cracow. This collection is not an archive. The cases in which we can precisely determine the date and the place of a manuscript’s execution, thus also about the paper on which the manuscript is made, are not numerous. Among the oldest paper manuscripts, there are a dozen or so in which the watermarks are identical to the reproductions available in the Briquet and Piccard repertories. We were also able to find some of the later watermarks in other repertories (Nostitz Papers, Churchill, Austro-Hungarian Watermarks, Heawood). We do not reproduce here those watermarks that already have been identified and dated in other collections. The references will be listed in the final version of the particular manuscript descriptions on which we are currently working. As we lack comparative tools, especially when it corners to the papers dated after the 16th century, we decided to progres­sively publish in Fibula examples of Italian, Spanish and French watermarks that we were able to date. If the collection were an archive, it would make it possible to prepare a precious repertory of papers. However, the watermarks we dated are not numerous, although we believe that they may be helpful in work with other manuscripts. The collection still is being studied and many of the reproduced watermarks are only a sample of the watermarks from the Berlin collection. In the third issue of our newsletter, we published some examples from the French manuscripts, next we moved to the Italian (Fibula 4) and Spanish ones (Fibula 5). In the present issue, we publish the last portion of the French manuscripts. The reproductions will be listed according to their catalogue number. To make searching easier, an index of motifs appearing in the watermarks will be provided, with references to the relevant cata­logue numbers.