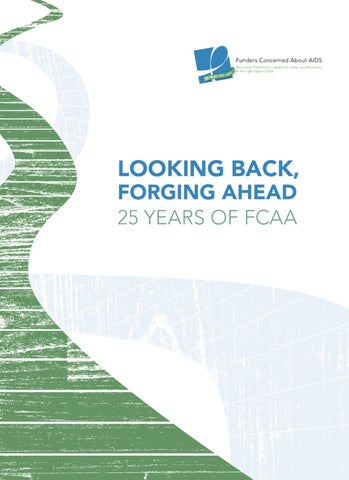 LOOKING BACK, FORGINGBACK, AHEAD LOOKING 25 YEARS OF FCAA FORGING AHEAD FCAA’S FIRST 25 YEARS

“In order to shape and to understand progress, it is necessary to know not only where one is, but also where one has been.” - Philanthropy and AIDS: Assessing the Past, Shaping the Future. A report on a FCAA/Gallup. 1998.

This year marks the 25th anniversary of Funders Concerned About AIDS’ work to mobilize philanthropic leadership, ideas, and resources in the fight against AIDS. We are using this occasion to remember, recommit and reinvigorate. We remember the lives lost to the disease, and the catalytic influence of the philanthropic sector in achieving successes to date. We recommit to our work of convening the sector, providing timely and relevant information to enlighten your grantmaking, and providing the important time and space for funder networking and exploration of collaborative approaches to current challenges. Finally, we will use this quarter century mark to reinvigorate the philanthropic sector—seeking to re-engage those funders who’ve moved on from AIDS, as well as reaching out to those working in adjacent areas of health, human rights, and social justice to highlight the important intersections in our work. Divided into four distinct eras—1981–1986 (Pre-FCAA), 1987–1996 (Founding and Establishment of FCAA), 1997–2005 (Momentum Builds), and 2005–Present (At the Crossroads)—this timeline aims to document the history of FCAA and the AIDS philanthropic sector alongside key milestones from the global AIDS response in effort to highlight our sector’s signature role in driving innovation, focusing on marginalized populations, and holding governments accountable. This information is not meant to be exhaustive, and as possible, we offer links to further resources (such as the updated publication archive on our website, or the terrific Global HIV/AIDS Timeline from the Kaiser Family Foundation). But more importantly, this recounting of the past is intended to strengthen our collective resolve to ensure the investments of the last three decades were not made in vain. After years of scaling up both public and private investment in HIV research, prevention, care, treatment and human rights protections, we now find ourselves in an era of diminishing resources—at precisely the time when sustained investment offers the greatest promise of achieving an AIDS-free generation. When FCAA was founded in 1987, we were just discovering what caused AIDS and how it was transmitted. Now, more than ever, we have the ability to prevent new infections, keep those already infected healthy, and protect the human rights of those living with and at highest risk for HIV. As FCAA continues to update this timeline, we hope that we will be able to document that, when we found ourselves at the crossroads of great promise and tremendous challenge, the philanthropic sector continued to drive the response to HIV/AIDS and achieving the dream of ending AIDS. Thank you to our past and current staff and Board, and an inspirational community of funders whose prolific work made this possible. Warmest Regards,

PRE-FCAA (PRE–1987) FUNDERS CONCERNED ABOUT AIDS  A  ffinity groups (AGs), a new form of philanthropic infrastructure support, come into existence in the 1970s and early 80s. By 1987 there are 10–12 AGs.  E  arliest meetings of what was to become the founders group of FCAA take place (1983).  R  ead more about this early era: Meeting the Challenge: Foundation Responses to Acquired Immune Deficiency Syndrome (Michael Seltzer, 1987).

In 1982 the Levi Strauss & Co. and the Levi Strauss Foundation (LSF) become one of the first corporations to get involved in HIV/AIDS through volunteerism, fundraising, and matching employee contributions. In 1985 LSF makes its first direct AIDS grant. Visit a timeline of LSF’s response to fighting AIDS. The American Foundation for AIDS Research (amfAR) is founded in 1985 to encourage and support AIDS research. In addition to pioneering AIDS fundraising, amfAR focuses on public education and public policy efforts.

 David Ho named Time magazine’s man of the year in 1996 for his discovery of highly active anti-retroviral therapy (HAART).  By 1996, 18 million people worldwide are infected with HIV; AIDS is leading cause of death in U.S. for all 25–44 year olds.

PHILANTHROPIC RESPONSES  In response to rising rates of HIV infection among youth, PBS airs the special Sex and other Matters of Life and Death in 1997 to raise awareness on HIV and teen pregnancy. Many funders support the effort, including: The New York Community Trust, Abbott Laboratories, John M. Lloyd Foundation, and the H. van Ameringen Foundation (among others).  In 2000, U.S. philanthropic funding for HIV/AIDS increases from $76.1 million in 1999 to at least $312.4 million in 2000, due in large part to one funder—the Gates Foundation.  T  wo major corporate funding initiatives begin in this era: Secure the Future® (Bristol-Myers Squibb, 1999), and the African Comprehensive HIV/AIDS Partnership (a partnership between Merck, the Gates Foundation, and the government of Botswana, 2002).  The Kaiser Family Foundation and UNAIDS launch the Global AIDS Media Initiative (2004).  U  .S.-based philanthropy takes more of a leadership role in addressing the global epidemic. In 2000 just over 16% of all HIV/AIDS grantmaking is directed outside of the U.S.; by 2005 that share increases to 66%.

In July 2010 AIDS United receives a $3.6 million Social Innovation Fund (SIF) grant to expand its Access to Care (A2C) initiative. This grant represents the “single largest award for HIV/AIDS made in decades by the federal government from new and non-AIDS-specific funds.” “Every new infection is on us.” In the era of “treatment as prevention,” this quote from Anu Gupta, Director of Corporate Contributions at Johnson & Johnson, sparks new urgency among the funding audience at FCAA’s 2011 AIDS Philanthropy Summit.

 F  CAA and EFG convene first-ever joint reception at the XVIII IAC in Vienna, featuring Bill Gates and Annie Lennox.  F  CAA strengthens ties and strategic programming with Grantmakers in Health in 2012 to reach broader health funders about the need to re-emphasize the importance of medical interventions in both the treatment and prevention of HIV.  F  CAA commemorates 25th anniversary in 2012, and enters into 2013–2015 strategic planning process.

PHILANTHROPIC RESPONSES  T  he HIV/AIDS philanthropic sector experiences another dramatic expansion between 2005 and 2006—an estimated total commitment of $979 million— due mainly to increased funding by the world’s now largest private funder of HIV/AIDS, the Gates Foundation.  A  new specialist HIV company—ViiV Healthcare—launches from GlaxoSmithKline and Pfizer (2009), and by 2010 ranks among the top 10 private HIV/AIDS funders in the U.S. and Europe.  H  IV Young Leaders Fund is established to enable new leadership in the HIV response among young people most affected by HIV (2009).  T  he field of HIV/AIDS-related philanthropy continues to remain highly concentrated; the top 10 funders annually represent around 80% of total funding. The Gates Foundation alone accounts for 47% of all disbursements in 2010.  A  t least 20 former major HIV/AIDS funders shift away from HIV/AIDS as a funding focus from 2007 to 2010.

In 2007 the Open Society Foundation’s Improving Outcomes: Blueprint for a National AIDS Plan for the United States became a focal point for AIDS advocates and grantmakers, leading to the formation of the Coalition for a National AIDS Strategy (CNAS). Funded in part by Broadway Cares/Equity Fights AIDS and the M•A•C AIDS Fund, the CNAS and other advocates kept the idea of a national strategy in the forefront of the 2008 presidential campaign, resulting in both major candidates promising a national strategy should they be elected.

HIV/AIDS  B  y 2012 there have been 30 million AIDS-related deaths, and 34 million people are living with HIV.  T  here are currently 1.2 million PLWHA in the United States, where the largest number of new HIV infections continue to occur among gay and bisexual men and other men who have sex with men.  Globally women comprise half of all adults living with HIV.  In 2009, President Obama launches the Global Health Initiative; lifts 22-yr old HIV travel ban.  The ban prohibiting federal support for needle-exchange programs is lifted in 2009, and reinstated in 2012.  Obama Administration announces the first U.S. National HIV/AIDS Strategy (2010).  International AIDS assistance from donor governments totals $6.9 billion in 2010, a 10% decrease from 2009, after years of steady and significant growth from 2002–2008.  June 5, 2011 marks 30 years since the first reported AIDS case.  Secretary of State Clinton calls for a “AIDS-Free Generation,” (2011).  In 2011, UNAIDS estimates gap of $7 billion annually between available resources and what is needed to achieve universal access by 2015.  G  lobal Fund cancels new grantmaking in its 10th year due to lack of funding (January 2012).  The FDA grants approval to first drug developed to prevent HIV infection (May 2012).  X  IX IAC to take place in Washington, DC (July 2012), first time on U.S. soil in over 20 years.

The FCAA toolkit: A Funders’ Guide to the National HIV/AIDS Strategy (NHAS) launches in December 2011. “At this ‘all-hands-on-deck’ moment, we must work in new ways, across disciplines and organizations, to make lasting progress on the American HIV/ AIDS epidemic-especially in terms of reducing HIV-related health disparities. The new online toolkit is an important step in advancing the contributions of the nation’s vital philanthropic sector to achieving the vision of the NHAS.” Ronald Valdiserri, M.D., M.P.H., Deputy Assistant Secretary for Health, Infectious Diseases, and Director, Office of HIV/AIDS Policy, U.S. Department of Health and Human Services, AIDS.gov blog (Dec. 2011). Looking Back, Forging Ahead: 25 Years of FCAA

Looking Back, Forging Ahead: 25 Years of FCAA