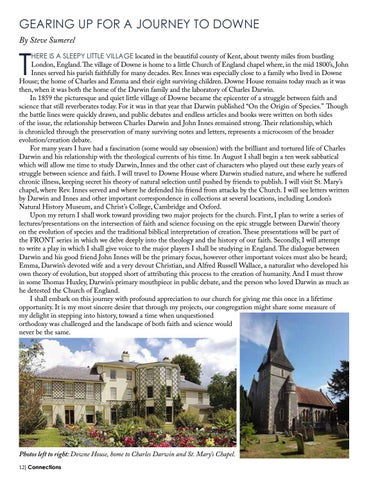 GEARING UP FOR A JOURNEY TO DOWNE By Steve Sumerel

HERE IS A SLEEPY LITTLE VILLAGE located in the beautiful county of Kent, about twenty miles from bustling London, England. The village of Downe is home to a little Church of England chapel where, in the mid 1800’s, John Innes served his parish faithfully for many decades. Rev. Innes was especially close to a family who lived in Downe House; the home of Charles and Emma and their eight surviving children. Downe House remains today much as it was then, when it was both the home of the Darwin family and the laboratory of Charles Darwin. In 1859 the picturesque and quiet little village of Downe became the epicenter of a struggle between faith and science that still reverberates today. For it was in that year that Darwin published “On the Origin of Species.” Though the battle lines were quickly drawn, and public debates and endless articles and books were written on both sides of the issue, the relationship between Charles Darwin and John Innes remained strong. Their relationship, which is chronicled through the preservation of many surviving notes and letters, represents a microcosm of the broader evolution/creation debate. For many years I have had a fascination (some would say obsession) with the brilliant and tortured life of Charles Darwin and his relationship with the theological currents of his time. In August I shall begin a ten week sabbatical which will allow me time to study Darwin, Innes and the other cast of characters who played out these early years of struggle between science and faith. I will travel to Downe House where Darwin studied nature, and where he suffered chronic illness, keeping secret his theory of natural selection until pushed by friends to publish. I will visit St. Mary’s chapel, where Rev. Innes served and where he defended his friend from attacks by the Church. I will see letters written by Darwin and Innes and other important correspondence in collections at several locations, including London’s Natural History Museum, and Christ’s College, Cambridge and Oxford. Upon my return I shall work toward providing two major projects for the church. First, I plan to write a series of lectures/presentations on the intersection of faith and science focusing on the epic struggle between Darwin’ theory on the evolution of species and the traditional biblical interpretation of creation. These presentations will be part of the FRONT series in which we delve deeply into the theology and the history of our faith. Secondly, I will attempt to write a play in which I shall give voice to the major players I shall be studying in England. The dialogue between Darwin and his good friend John Innes will be the primary focus, however other important voices must also be heard; Emma, Darwin’s devoted wife and a very devout Christian, and Alfred Russell Wallace, a naturalist who developed his own theory of evolution, but stopped short of attributing this process to the creation of humanity. And I must throw in some Thomas Huxley, Darwin’s primary mouthpiece in public debate, and the person who loved Darwin as much as he detested the Church of England. I shall embark on this journey with profound appreciation to our church for giving me this once in a lifetime opportunity. It is my most sincere desire that through my projects, our congregation might share some measure of my delight in stepping into history, toward a time when unquestioned orthodoxy was challenged and the landscape of both faith and science would never be the same. 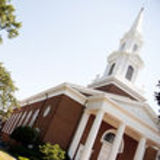