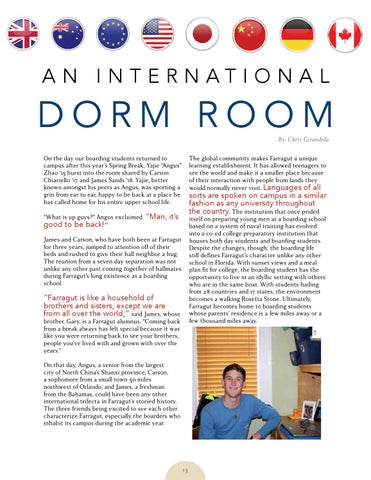 On the day our boarding students returned to campus after this year’s Spring Break, Yajie “Angus” Zhao ‘15 burst into the room shared by Carson Chiariello ‘17 and James Sands ‘18. Yajie, better known amongst his peers as Angus, was sporting a grin from ear to ear, happy to be back at a place he has called home for his entire upper school life.

The global community makes Farragut a unique learning establishment. It has allowed teenagers to see the world and make it a smaller place because of their interaction with people from lands they would normally never visit. Languages of all

sorts are spoken on campus in a similar fashion as any university throughout the country. The institution that once prided

itself on preparing young men at a boarding school based on a system of naval training has evolved into a co-ed college preparatory institution that houses both day students and boarding students. Despite the changes, though, the boarding life still defines Farragut’s character unlike any other school in Florida. With sunset views and a meal plan fit for college, the boarding student has the opportunity to live in an idyllic setting with others who are in the same boat. With students hailing from 28 countries and 17 states, the environment becomes a walking Rosetta Stone. Ultimately, Farragut becomes home to boarding students whose parents’ residence is a few miles away or a few thousand miles away.

good to be back!”

James and Carson, who have both been at Farragut for three years, jumped to attention off of their beds and rushed to give their hall neighbor a hug. The reunion from a seven day separation was not unlike any other past coming together of hallmates during Farragut’s long existence as a boarding school.

“Farragut is like a household of brothers and sisters, except we are from all over the world,” said James, whose brother, Gary, is a Farragut alumnus. “Coming back from a break always has felt special because it was like you were returning back to see your brothers, people you’ve lived with and grown with over the years.”

On that day, Angus, a senior from the largest city of North China’s Shanxi province, Carson, a sophomore from a small town 50 miles northwest of Orlando, and James, a freshman from the Bahamas, could have been any other international trifecta in Farragut’s storied history. The three friends being excited to see each other characterize Farragut, especially the boarders who inhabit its campus during the academic year. 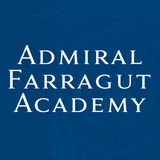 Publication about Admiral Farragut Academy, its current and past students, faculty and staff, and all the interesting things that have happe...

Publication about Admiral Farragut Academy, its current and past students, faculty and staff, and all the interesting things that have happe...