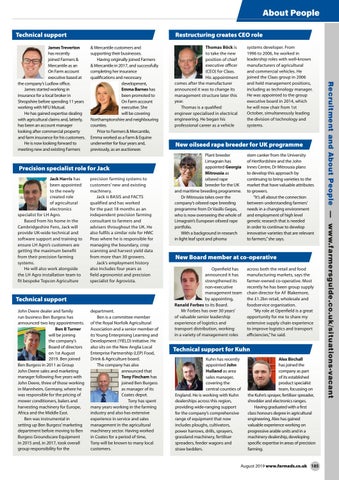 About People Technical support & Mercantile customers and supporting their businesses. Having originally joined Farmers & Mercantile in 2017, and successfully completing her insurance qualifications and necessary development, Emma Barnes has been promoted to On Farm account executive. She will be covering Northamptonshire and neighbouring counties. Prior to Farmers & Mercantile, Emma worked as a Farm & Equine underwriter for four years and, previously, as an auctioneer.

Precision specialist role for Jack Jack Harris has been appointed to the newly created role of agricultural electronics specialist for LH Agro. Based from his home in the Cambridgeshire Fens, Jack will provide UK-wide technical and software support and training to ensure LH Agro’s customers are getting the maximum benefit from their precision farming systems. He will also work alongside the LH Agro installation team to fit bespoke Topcon Agriculture

precision farming systems to customers’ new and existing machinery. Jack is BASIS and FACTS qualified and has worked for the past 18 months as an independent precision farming consultant to farmers and advisers throughout the UK. He also fulfils a similar role for HMC Peas where he is responsible for managing the boundary, crop scanning and harvest yield data from more than 30 growers. Jack’s employment history also includes four years as field agronomist and precision specialist for Agrovista.

Technical support John Deere dealer and family run business Ben Burgess has announced two key appointments. Ben B Turner will be joining the company’s Board of directors on 1st August 2019. Ben joined Ben Burgess in 2011 as Group John Deere sales and marketing manager following five years with John Deere, three of those working in Mannheim, Germany, where he was responsible for the pricing of mower conditioners, balers and harvesting machinery for Europe, Africa and the Middle East. Ben was instrumental in setting up Ben Burgess’ marketing department before moving to Ben Burgess Groundscare Equipment in 2015 and, in 2017, took overall group responsibility for the

department. Ben is a committee member of the Royal Norfolk Agricultural Association and a senior member of its Young Enterprising Learning and Development (YIELD) initiative. He also sits on the New Anglia Local Enterprise Partnership (LEP) Food, Drink & Agriculture board. The company has also announced that Tony Fincham has joined Ben Burgess as manager of its Coates depot. Tony has spent many years working in the farming industry and also has extensive experience in service and sales management in the agricultural machinery sector. Having worked in Coates for a period of time, Tony will be known to many local customers.

Thomas Böck is to take the new position of chief executive officer (CEO) for Claas. His appointment comes after the manufacturer announced it was to change its management structure later this year. Thomas is a qualified engineer specialised in electrical engineering. He began his professional career as a vehicle

systems developer. From 1996 to 2006, he worked in leadership roles with well-known manufacturers of agricultural and commercial vehicles. He joined the Claas group in 2006 and held management positions, including as technology manager. He was appointed to the group executive board in 2014, which he will now chair from 1st October, simultaneously leading the division of technology and systems.

stem canker from the University of Hertfordshire and the John Innes Centre, Dr Mitrousia plans to develop this approach by continuing to bring varieties to the market that have valuable attributes to growers. “It’s all about the connection between understanding farmers’ needs in a changing environment and employment of high level genetic research that is needed in order to continue to develop innovative varieties that are relevant to farmers,” she says.

New Board member at co-operative Openfield has announced it has strengthened its non-executive management team by appointing, Ranald Forbes to its Board. Mr Forbes has over 30 years’ of valuable senior leadership experience of logistics and transport distribution, working in a variety of management roles

across both the retail and food manufacturing markets, says the farmer-owned co-operative. Most recently he has been group supply chain director for AF Blakemore, the £1.2bn retail, wholesale and foodservice organisation. “My role at Openfield is a great opportunity for me to share my extensive supply chain experience to improve logistics and transport efficiencies,” he said.

Alex Birchall has joined the company as part of its established product specialist team, focussing on the Kuhn’s sprayer, fertiliser spreader, shredder and electronics ranges. Having graduated with a first class honours degree in agricultural engineering, Alex has gained valuable experience working on progressive arable units and in a machinery dealership, developing specific expertise in areas of precision farming.

Recruitment and About People — www.farmersguide.co.uk/situations-vacant

James Treverton has recently joined Farmers & Mercantile as an On Farm account executive based at the company’s Ludlow office. James started working in insurance for a local broker in Shropshire before spending 11 years working with NFU Mutual. He has gained expertise dealing with agricultural claims and, latterly, has been an account manager looking after commercial property and farm insurance for his customers. He is now looking forward to meeting new and existing Farmers