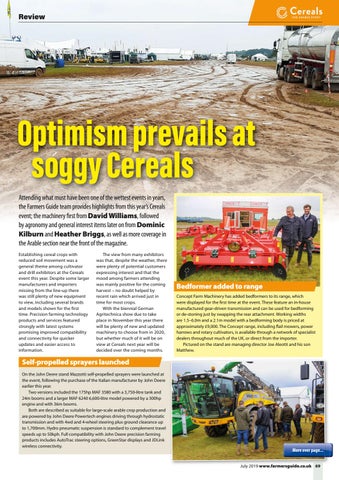 Optimism prevails at soggy Cereals Attending what must have been one of the wettest events in years, the Farmers Guide team provides highlights from this year’s Cereals event; the machinery first from David Williams, followed by agronomy and general interest items later on from Dominic Kilburn and Heather Briggs, as well as more coverage in the Arable section near the front of the magazine. Establishing cereal crops with reduced soil movement was a general theme among cultivator and drill exhibitors at the Cereals event this year. Despite some larger manufacturers and importers missing from the line-up there was still plenty of new equipment to view, including several brands and models shown for the first time. Precision farming technology products and services featured strongly with latest systems promising improved compatibility and connectivity for quicker updates and easier access to information.

The view from many exhibitors was that, despite the weather, there were plenty of potential customers expressing interest and that the mood among farmers attending was mainly positive for the coming harvest – no doubt helped by recent rain which arrived just in time for most crops. With the biennial German Agritechnica show due to take place in November this year there will be plenty of new and updated machinery to choose from in 2020, but whether much of it will be on view at Cereals next year will be decided over the coming months.

Bedformer added to range Concept Farm Machinery has added bedformers to its range, which were displayed for the first time at the event. These feature an in-house manufactured gear-driven transmission and can be used for bedforming or de-stoning just by swapping the rear attachment. Working widths are 1.5–6.0m and a 2.1m model with a bedforming body is priced at approximately £9,000. The Concept range, including flail mowers, power harrows and rotary cultivators, is available through a network of specialist dealers throughout much of the UK, or direct from the importer. Pictured on the stand are managing director Joe Aleotti and his son Matthew.

Self-propelled sprayers launched On the John Deere stand Mazzotti self-propelled sprayers were launched at the event, following the purchase of the Italian manufacturer by John Deere earlier this year. Two versions included the 175hp MAF 3580 with a 3,750-litre tank and 24m booms and a larger MAF 6240 6,600-litre model powered by a 300hp engine and with 36m booms. Both are described as suitable for large-scale arable crop production and are powered by John Deere Powertech engines driving through hydrostatic transmission and with 4wd and 4-wheel steering plus ground clearance up to 1,700mm. Hydro pneumatic suspension is standard to complement travel speeds up to 50kph. Full compatibility with John Deere precision farming products includes AutoTrac steering options, GreenStar displays and JDLink wireless connectivity.