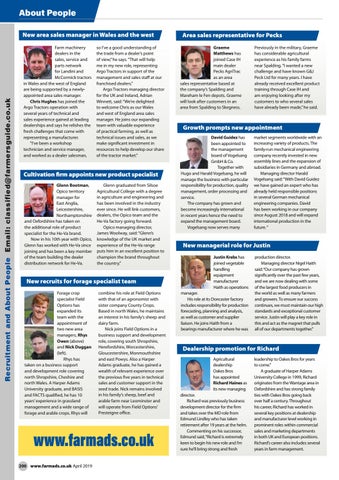 New area sales manager in Wales and the west Farm machinery dealers in the sales, service and parts network for Landini and McCormick tractors in Wales and the west of England are being supported by a newlyappointed area sales manager. Chris Hughes has joined the Argo Tractors operation with several years of technical and sales experience gained at leading dealerships and says he relishes the fresh challenges that come with representing a manufacturer. “I’ve been a workshop technician and service manager, and worked as a dealer salesman,

so I’ve a good understanding of the trade from a dealer’s point of view,” he says. “That will help me in my new role, representing Argo Tractors in support of the management and sales staff at our franchised dealers.” Argo Tractors managing director for the UK and Ireland, Adrian Winnett, said: “We’re delighted to welcome Chris as our Wales and west of England area sales manager. He joins our expanding team with valuable experience of practical farming, as well as technical issues and sales, as we make significant investment in resources to help develop our share of the tractor market.”

Cultivation firm appoints new product specialist Glenn Bootman, Opico territory manager for East Anglia, Leicestershire, Northamptonshire and Oxfordshire has taken on the additional role of product specialist for the He-Va brand. Now in his 10th year with Opico, Glenn has worked with He-Va since joining and has been a key member of the team building the dealer distribution network for He-Va.

Glenn graduated from Silsoe Agricultural College with a degree in agriculture and engineering and has been involved in the industry ever since. He will link customers, dealers, the Opico team and the He-Va factory going forward. Opico managing director, James Woolway, said: “Glenn’s knowledge of the UK market and experience of the He-Va range puts him in an excellent position to champion the brand throughout the country.”

New recruits for forage specialist team Forage crop specialist Field Options has expanded its team with the appointment of two new area managers, Rhys Owen (above) and Nick Duggan (left). Rhys has taken on a business support and development role covering north Shropshire, Cheshire and north Wales. A Harper Adams University graduate, and BASIS and FACTS qualified, he has 10 years’ experience in grassland management and a wide range of forage and arable crops. Rhys will

combine his role at Field Options with that of an agronomist with sister company County Crops. Based in north Wales, he maintains an interest in his family’s sheep and dairy farm. Nick joins Field Options in a business support and development role, covering south Shropshire, Herefordshire, Worcestershire, Gloucestershire, Monmouthshire and east Powys. Also a Harper Adams graduate, he has gained a wealth of relevant experience over the previous five years in technical sales and customer support in the seed trade. Nick remains involved in his family’s sheep, beef and arable farm near Leominster and will operate from Field Options’ Presteigne office.

Previously in the military, Graeme has considerable agricultural experience as his family farms near Spalding. “I wanted a new challenge and have known G&J Peck Ltd for many years. I have already received excellent product training through Case IH and am enjoying looking after my customers to who several sales have already been made,” he said.

Growth prompts new appointment David Guidez has been appointed to the management board of Vogelsang GmbH & Co. Together with Hugo and Harald Vogelsang, he will manage the business with particular responsibility for production, quality management, order processing and service. The company has grown and become increasingly international in recent years hence the need to expand the management board. Vogelsang now serves many

market segments worldwide with an increasing variety of products. The family-run mechanical engineering company recently invested in new assembly lines and the expansion of subsidiaries in Germany and abroad. Managing director Harald Vogelsang said: “With David Guidez we have gained an expert who has already held responsible positions in several German mechanical engineering companies. David has been working in our company since August 2018 and will expand international production in the future. “

New managerial role for Justin Justin Krebs has joined vegetable handling equipment manufacturer Haith as operations manager. His role at its Doncaster factory includes responsibility for production forecasting, planning and analysis, as well as customer and supplier liaison. He joins Haith from a bearings manufacturer where he was

production director. Managing director Nigel Haith said: “Our company has grown significantly over the past few years, and we are now dealing with some of the largest food producers in the world as well as many farmers and growers. To ensure our success continues, we must maintain our high standards and exceptional customer service. Justin will play a key role in this and act as the magnet that pulls all of our departments together.”

Dealership promotion for Richard Agricultural dealership Oakes Bros has appointed Richard Haines as its new managing director. Richard was previously business development director for the firm and takes over the MD role from Edmund Lindley who has taken retirement after 19 years at the helm. Commenting on his successor, Edmund said, “Richard is extremely keen to begin his new role and I’m sure he’ll bring strong and fresh

leadership to Oakes Bros for years to come.” A graduate of Harper Adams University College in 1999, Richard originates from the Wantage area in Oxfordshire and has strong family ties with Oakes Bros going back over half a century. Throughout his career, Richard has worked in several key positions at dealership and manufacturer level working in prominent roles within commercial sales and marketing departments in both UK and European positions. Richard’s career also includes several years in farm management.